British import Cockneys vs. Zombies is the kind of movie where the title pretty much sums up the basic plot, telling you all you need to know about it. Although the film could easily be dismissed as a cheap knock-off of the superior Shaun of the Dead, director Matthias Hoene injects enough originality and humor to allow it to stand on its own. 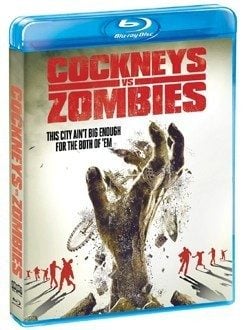 When a construction crew unseals a tomb uncovered at the site, they unleash a zombie virus on London’s East End. Meanwhile, brothers Terry and Andy (Rasmus Hardiker and Harry Treadaway), along with their cousin Katy (Michelle Ryan), inside man Davey (Jack Doolan), and weapons expert Mental Mickey (Ashley Thomas), plan to rob a bank to help save the retirement home run by their grandfather Ray (Alan Ford) from being foreclosed upon. Instead of a police barricade outside the bank, they find they must battle zombies to make their way to the getaway van and rescue the retirement home.Cockneys vs. Zombies takes some good-natured pokes at the zombie genre, such as having to shoot them in the head to kill the undead (Mental Mickey has a metal plate, making it quite difficult once he turns) and the overall lack of speed (a senior in a walker gets chased by a zombie). Hardiker and Treadaway have good chemistry as the two orphaned brothers, Alan Ford (Snatch) is over the top as Ray, the fed-up grandfather and WWII veteran, and American audiences will likely recognize Michelle Ryan (The Bionic Woman) as the tomboy cousin Katy and Honor Blackman (Pussy Galore from Goldfinger) as Ray’s love interest, Peggy.The movie is much better that it deserves to be, and although the title sounds like a SyFy Original Movie, it is leaps and bounds above anything that airs on that channel on Saturday nights.

Shot digitally on the Arriflex Alexa, the 1080p transfer provided to Shout! Factory, compressed using the AVC codec, retains the movie’s intended 2.35:1 aspect ratio. Colors are somewhat muted through much of the film, favoring greys and blues, with flashbacks containing much more vivid colors. Detail is exceptional, highlighting the fine practical creature and make-up effects used, but occasionally revealing some of the lower budget CGI work used to depict the aftermath of a zombie attack in London.

The DTS-HD Master Audio 5.1 soundtrack is very heavy on the lower frequencies, particularly during the pulsing rock music used in the credit sequences. Surrounds are used quite effectively, and dialogue is clear and (mostly) intelligible, although the thick Cockney accents can sometimes be difficult to understand. Thankfully, an English subtitle track has been included.

Audio Commentary by Director Matthias HoeneAudio Commentary by Writer James MoranOriginal Look Behind The Scenes (HD; 29:13): Viewable in either individual segments or as an entire featurette, including interviews with the cast and crew along with behind the scenes footage.Theatrical Trailer (HD; 2:22)Digital Copy: A redemption code and URL are provided on an insert to download SD and HD versions that are Windows Media and iTunes compatible.

Cockneys vs. Zombies is a fun, somewhat forgettable British horror/comedy making its way to Blu-ray after a very brief and limited theatrical and VOD run in August. Fans of campy horror films with British humor will likely want to at least give this one a rental.