Arthur Kopit's scurrilous satire Indians dealing with the mistreatment of the American Indian by invading immigrants was adapted by Alan Rudolph and director Robert Altman to encompass satirizing everything from American legends to show business institutions in Buffalo Bill and the Indians, or Sitting Bull’s History Lesson (the last time the full title will be addressed in this review). It’s a messy film and occasionally a pompous one, but there’s ironic albeit sour substance here dissecting the first American media-created celebrity showing us the prefabricated worlds of the Real Housewives and the Kardashians aren’t really offering anything new at all in terms of hype or bombast. 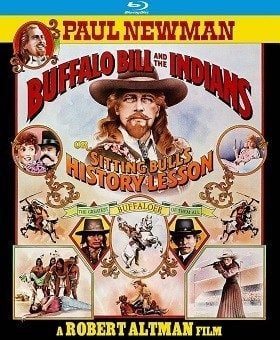 It’s 1885, and William F. Cody (Paul Newman) is raking in big bucks as legendary plainsman Buffalo Bill with his traveling Wild West Show. With his producer Nate Salisbury (Joel Grey) constantly looking for new acts to add to the show to continue to bring in the public, the infamous Lakota chief Sitting Bull (Frank Kaquitts) agrees to join the show. Speaking through his interpreter (Will Sampson), however, the Chief makes demands that increasingly raise the ire of Bill and Nate: he wants accommodations separate from the other Indians in the show, he demands a salary in advance, and he refuses to take part in the hokey staged Battle of the Little Big Horn (especially since he says he actually wasn’t present when it occurred). But Sitting Bull’s demands are only one headache the troupe must deal with. There’s Annie Oakley (Geraldine Chaplin) trying increasingly dangerous stunts with her jittery, philandering husband (John Considine), writer Ned Buntline (Burt Lancaster) who created the Buffalo Bill legend and who now demands a face-to-face with the man, and an impending visit from President Grover Cleveland (Pat McCormick) which will require much planning and another first: a nighttime performance.Making sure that the viewer understands that the Buffalo Bill from legends (and William Wellman’s cornball 1944 film classic) was a pure invention, scenarists Alan Rudolph and Robert Altman take every opportunity to expose the frontiersman as a deluded fraud. This includes several early counterpoint scenes with Buntline spouting his truths and Bill’s producer and various members of his entourage verbalizing increasingly fictitious variations of the facts Cody wants to espouse about his accomplishments. It takes thirteen minutes for us to get our first look at the great man, but in Paul Newman’s person and demeanor, it’s worth the wait as we see a show business star who long ago succumbed to the luster of his own publicity and rather enjoys now being the center of attention even with its occasional bumps and disturbances. But Rudolph and Altman lay their satire on with a trowel as their exposure of Bill’s façade really has nowhere to go for almost two hours once it’s revealed . So, we see him in a fetishistic succession of dalliances with operatic sopranos, his complete lack of skill as a tracker, and the show biz tricks used to make him appear as an expert marksman. (On the other hand, a genuine crack shot Annie Oakley gets some screen time but isn’t used much to contrast her skill with Bill’s phoniness). And Bill isn’t the only one brought forward for ridicule. His pretentious windbag of a publicist (Kevin McCarthy as Major John Burke) catches a few barbs, and insecure, rather dense President Cleveland doesn’t escape unscathed either. Late in the film, Bill’s producer states of Bill that “A man like that is what’s made our country what it is today” putting a fitting capper on the satire as director Altman, speaking with a 20th century perspective at the state of our country in 1976 recovering from the twin debacles of Vietnam and Watergate at the hands of a man who was clearly very different from his once vaunted public persona, wants to make certain his message is clear for all: the more things change, the more they remain the same. Of course, he had already made these observations clear in his masterwork of just a year before – Nashville.Paul Newman’s risky, bombastic stab at portraying a tarnished, egotistical American icon without obvious tongue-in-cheek or winking at the audience is a career milestone but is one of his least celebrated performances and one that’s worthy of a re-evaluation. Joel Grey reigns in theatrical mannerisms to etch a firm performance as Bill’s producer (and the jingoistic arena master of ceremonies). John Considine as the jittery Frank Butler offers some genuine laughs throughout the movie, especially after Annie nicks him with a bullet and he must endure a reception for the President trying to hide his ailment. Frank Kaquitts as Sitting Bull doesn’t say much, but his presence often speaks volumes as the Chief forgoes the tinsel to achieve his own goals for his remaining people. Will Sampson speaks eloquently for the Chief as his interpreter (later coming to portray him in a hokey staged fight between Bill and the Chief, something the chief himself would never have agreed to). Burt Lancaster’s role as Ned Buntline is brief, but he makes his points and rides into the sunset. Other Robert Altman regulars like Geraldine Chaplin, Shelley Duvall, and Harvey Keitel get their own moments to shine and ultimately deliver.

The film’s Panavision theatrical aspect ratio of 2.35:1 is faithfully delivered in 1080p resolution using the AVC codec. The transfer swings wildly in quality with some scenes exceedingly clear and crisp and others (particularly all the long shots and even some close-ups) mushy and unpleasantly soft. Black levels are mediocre, but color saturation is acceptable and skin tones are realistic. There are numerous dust specks and flecks especially early in the film, and there’s some obvious banding in the image in the first few minutes, too, but that thankfully doesn’t appear again. The transfer has been divided into 8 chapters.

The DTS-HD Master Audio 2.0 mono sound mix is typical of its era and much as I remember from seeing the film in the theater. Dialogue has been well recorded (Altman’s famous overlapping dialogue is definitely present and accounted for) and never conflicts with Richard Baskin’s music or the various sound effects all residing on the same track. Hiss and other age-related anomalies are not present to distract from the (admittedly elevated amounts of) talk.

From the Prairie to the Palace (4:33, SD): a promotional featurette about the making of the film with sound bites from Paul Newman about his character and about director Robert Altman and with a few glimpses of Altman directing the climactic fight scene.Trailers (1:45, 2:28, SD): a teaser trailer and a theatrical trailer are present in the menu.

Robert Altman’s satiric take on the follies of fame and fortune for the participants as well as their receptive audiences finds an erratic if occasionally memorable framework in Buffalo Bill and the Indians. The film is long and occasionally indulgent and obvious, but the compelling aspects of the presentation make it certainly worth experiencing once, especially for fans of the director.

Boy am I glad I have the Kino disc!
Color timing more than anything makes, or breaks a film for me. Kino is fine. Indicator, not so much.
Buffalo Bill and the Indians, or Sitting Bull's History Lesson Blu-ray - Paul Newman (dvdbeaver.com)

Matt: Great review, but I have a tiny complaint. If you would put paragraph breaks in your segment on The Production, it would be much easier to read!

Harold Chasen said:
Matt: Great review, but I have a tiny complaint. If you would put paragraph breaks in your segment on The Production, it would be much easier to read!
Click to expand...

When Matt published his review, paragraph breaks were there. Forum software upgrades have affected those breaks in a number of older reviews, sadly.

Neil Middlemiss said:
When Matt published his review, paragraph breaks were there. Forum software upgrades have affected those breaks in a number of older reviews, sadly.
Click to expand...

Thank you, Neil, for explaining the bizarre looking appearance of older reviews for new readers. Believe me, if I were allowed to go back into those old reviews, I'd reformat them by hand because they frustrate me, too!
H

Oh boy - I didn't realize the review was from 2014, and was only brought to the top by the new post comparing the Indicator and Kino discs!

Thanks for explaining the formatting problem - now I'll know for other older reviews.
You must log in or register to reply here.