The difference between a comedy and a spoof is a comedy is funny. Bang! Bang! You're Dead! has been marketed as a spoof since its original release in 1966. Tony Randall plays an American architect in Marrakesh who finds himself caught up in international intrigue in a case of mistaken identity? Or is it? 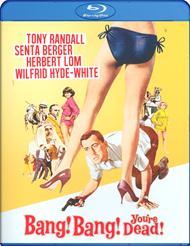 Tony Randall(The Odd Couple) plays Andrew Jessel, an American architect traveling in Marrakesh. Jessel finds himself in over his head by being in the wrong place at the wrong time, not unlike Hitchock's The Man Who Knew Too Much(both versions). Jessel has a chance encounter on a bus with Kyra Stanovy, played by Senta Berger(Major Dundee), and they both find themselves involved in events out of their control. Jessel and Kyra are among a group of travelers, one of which is a courier delivering high value bonds to another spy in exchange for manipulating an important vote at the United Nations.Terry-Thomas(It's A Mad, Mad, Mad, Mad World) and Wilfrid Hyde-White(My Fair Lady) play fellow travelers who also may or may not be the mysterious courier. This film has something in common with the Pink Panther film series: Herbert Lom and Burt Kwouk both appear in this film. Actually, those actors may be the only thing that this film has in common with the Pink Panther films, since the Pink Panther films are actually funny.I have a theory that marketing executives promote a film as a spoof instead of a comedy when to market the film as a comedy would make them liable for prosecution under false advertising laws. Bang! Bang! You're Dead! has always been marketed as a spoof, for good reason since the film is not terribly funny. Honestly, the funniest moment in the film is when Tony Randall's Jessel falls from the edge of a rooftop onto a camel. There isn't even anything particularly funny about that, since there are funny ways to fall onto a camel and not so funny ways to fall onto a camel, and the manner in which Jessel falls on the camel doesn't even seem all that amusing.The title Bang! Bang! You're Dead! and the presence of comedy veterans like Tony Randall and Terry-Thomas suggest that funny stuff is intended in the film. Taste is relative, so if you are reading this and you are offended bacause this is your favorite film, then I apologise, but I have to be honest and state my belief that most people are not going to think this film is very funny. Since nearly 50 years have elapsed since the release of this film, I know that it is not revered as one of the greatest ever comedies.This film was released during the height of the 1960s secret agent fad, and there were many spy spoofs released in 1966 inspired by James Bond and his imitators, and not all of them were funny either.Bang! Bang! You're Dead! is not a terrible film but it's not a particularly good one either. The film deserves high marks for its cast of actors, and it is unfortunate that the actors were not provided material worthy of them in this film. The screenplay by producer Harry Alan Towers is credited to a pseudonym, Peter Yeldham. Bang! Bang! You're Dead! is best enjoyed by ignoring the plot and sitting back and enjoying the actors as they chew the scenery, which is beautiful scenery as the film was made on location in Morocco.

Bang! Bang! You're Dead! appears on Blu-Ray in its original 1:78.1 aspect ratio using the AVC codec on a 25GB single layer disc. This transfer has been derived from a print with mildly faded colors and moderate contrast, resulting in a presentation that is much softer and indistinct than what we often see on Blu-ray. Film grain is not apparent, with fairly good shadow detail but poor fine detail. Some dirt and debris are present, but most of the presentation is devoid of those flaws.

The mono DTS-HD audio does good service to the film. A mono track will not have a great dynamic range or richness of sound by its nature, but the audio here is very good with only a couple of isolated instances in which dialogue is difficult to discern. There is no audible hiss during the presentation.

This edition does not have any special features.

Bang! Bang! You're Dead! is an adequate spy spoof from the mid-1960s with an excellent cast including Tony Randall, Terry-Thomas, Senta Berger, Herbert Lom, and Wilfrid Hyde-White. The location filming in Morocco is also a plus. The video and audio presentation on this film are adequate. If you are looking for a 60s spy thriller with location filming in Northern Africa with a great cast of actors, then Bang! Bang! You're Dead! may be your cup of tea.

And meanwhile, really good movies languish awaiting a BD treatment. Hopefully, one better than this film received.
You must log in or register to reply here.