Gustavo Dudamel conducts the Los Angeles Philharmonic during its 2014/2015 season Opening Night Concert and Gala, paying tribute to film composer John Williams, featuring music from some of his most popular scores, in A John Williams Celebration. 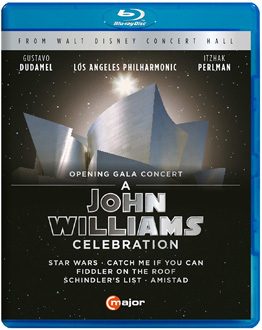 John Williams is, perhaps, the world’s best-known film composer, having written scores for such classics as Raiders of the Lost Ark, Superman, Goodbye, Mr. Chips, and The Poseidon Adventure. Conductor Gustavo Dudamel choose to open the 2014/2015 concert season for the Los Angeles Philharmonic at the Walt Disney Concert Hall with a selection of compositions from John Williams. Interestingly, he chose some of Williams’ more familiar works, opening with Olympic Fanfare & Theme from the 1984 games, with assistance from the U.S. Army Herald Trumpets. Next up is Williams’ Soundings, a composition written exclusively for the grand opening of the Walt Disney Concert Hall back in 2003, meant to take advantage of the acoustics of the grand hall and, as Williams puts it in the interview segment, a musical interpretation of the architectural design of the building. Dudamel follow this with selections from Schindler’s List, with help from Itzhak Perlman on violin: Remembrances, Jewish Town: Krakow Ghetto 1941, and Theme. Next up in the program is William’s arrangement of Cadenza and Variations from Fiddler on the Roof from the original score by Jerry Bock, again with violin solos by Perlman. The concert then shifts gears to jazz, with excerpts from Steven Spielberg’s film, Catch Me If You Can: Closing In, Reflections, and Joy Ride, featuring Dan Higgins on alto saxophone, Glenn Paulson on vibraphone, and Michael Valerio on string bass. And what would a tribute to John Williams be without the infamous Throne Room and Finale from Star Wars? The Los Angeles Children’s Chorus lends their support with Dry Your Tears, Africa from Amistad, only to be chased off stage by the Theme from Jaws. Williams is then coaxed upstage from the audience to conduct Imperial March from The Empire Strikes Back in a rousing finale, complete with marching Storm Troopers led by Darth Vader.

Watching a symphony concert on television, regardless of how small or large the screen may be, can sometimes be a challenge. The concert was recorded as part of the PBS series Great Performances, and was produced in association with WNET in New York (Los Angeles no longer has a PBS member station), and to break up the cuts between orchestra members and Dudamel conducting, the program will occasionally cut away to animations and storyboard animatics shown to the audience on the large projection screen above the orchestra. Most music fans, however, will more likely find themselves sitting back and enjoying the music rather than paying attention to the video presentation.

Since this program was originally recorded for broadcast on PBS member stations, it should comes as no surprise that the video presentation is in AVC-encoded 1080i. Overall, this is quite possibly a big improvement over the heavily compressed broadcast version, but it still has a few issues. Colors are natural and consistent, and detail is quite good. However, there are some minor issues with video noise, particularly in the darker and poorly lit shots, but that could be attributed to what it is - a darkly lit shot using cameras that work better in bright light (which often exhibit added noise and crush in low-light situations). And since this is a 1080i encode, there are some very brief interlacing issues, but nothing that is too distracting. As I said in my review of the program itself, most “viewers” will be more concerned with the audio rather than the video presentation.

Two audio choices are provided: uncompressed PCM 2.0 stereo and lossless DTS-HD Master Audio 5.1. However, there is no audio selection on the top menu, and the disc defaults to PCM when the program is started. For some reason, the studio, C Major, placed the audio and subtitle sub menus in the pop-up menu only. This means that to select the DTS-HD MA 5.1 track, one must hit PLAY from the top menu, then pull up the pop up menu and make your audio and subtitle selection. This is a relatively new studio, so hopefully future releases will not have this issue. Both tracks sound amazing, with the DTS-HD track having better low-end reproduction, increased fidelity, and a wider soundfield.

Interview with John Williams and Gustavo Dudamel (1080i; 13:45): Dudamel interviews Williams, and it’s quite obvious that Dudamel is a huge fan of the composer. They discuss the selections from the program, including some background on how they came to be, but they also discuss one or two compositions that were not in the program (such as The Adventures of Tin-Tin, leading one to wonder if some pieces were left out of the broadcast).

Interview with Itzhak Perlman (1080i; 3:44): The violinist discusses how he came to be involved in the score for Schindler’s List.

A John Williams Celebration plays it safe, presenting some of the composers better-known works that play well in a symphony hall setting rather than more obscure pieces, although the inclusion of Catch Me If You Can is a big plus and probably the least known of all the compositions. The video presentation is slightly above average, but the where the disc excels is in its audio presentation. I had some issues with the menu structure on the disc (particularly the way one must choose which audio track), but fans of the composer’s work will be generally pleased.

Sounds like something for me to put on my birthday/Christmas wish list. I can see myself putting this on with a fine single malt in hand on a fall or early winter evening.
You must log in or register to reply here.