Forum List What's new Dark Style Change width
Log in Register
What's new Search
Menu
Log in
Register
Navigation
Install the app
More options
Dark Style
Close Menu
Posted on December 1, 2016 by Matt Hough
You are using an out of date browser. It may not display this or other websites correctly.
You should upgrade or use an alternative browser.
Satisfying behind the scenes look at a superstar athlete at the peak of his powers 3.5 Stars

An inside look at the career of the fastest man on Earth, Usain Bolt, distinguishes the new documentary I Am Bolt though, as with many sports documentaries, the emphasis is mostly on the triumphs without much of the agony it takes to get there.

An inside look at the career of the fastest man on Earth, Usain Bolt, distinguishes the new documentary I Am Bolt though, as with many sports documentaries, the emphasis is mostly on the triumphs without much of the agony it takes to get there. Generally thorough and always compelling, I Am Bolt offers a look at both the professional athlete and the fun-loving man who ranks among the world’s most beloved sports figures.

Directors Benjamin Turner and Gabe Turner offer a patchwork compendium of Usain Bolt’s life and career, choosing not to present his track achievements in linear order but jumping back and forth in time as he trains for his third and final Olympics in Rio. Bolt is a sprinter specializing in the 100m and 200m races (along with the 4 X 100m relay) having success in the world junior championships in 2002 and then not realizing his full potential as an adult senior-class sprinter until the 2008 season leading into the Beijing Olympics where he won three gold medals in his specialty events. The documentary doesn’t really cover what went on during the years between his junior world title and his Olympics wins suggesting he experienced losses enough to provide the necessary motivation that a driven athlete requires to push himself to greatness. Once Bolt achieves his three gold medals running for Jamaica in world record fashion, we pop back and forth between his punishing training sessions, the seldom but most welcome vacations between seasons when he can party a bit with his friends, and the intensity of his pride in winning world championships, setting world records, and not wishing to lose the luster of the acclaim he’s garnered to his rivals.

Along the way we meet his parents who don’t hold back on telling stories of achievements as well as stories of the discipline they doled out to him as a mischievous young teen. We also see up close and personal his coach Glen Mills who doesn’t spare the figurative rod in training his champion despite his titles and international acclaim, his best friend and manager Nugent “NJ” Walker, and teammate Yohan Blake who has had some success against Bolt in head-to-head match-ups but never quite has pulled the wins in the most important matches. Unlike many champion athletes, Bolt is more fun-loving than plagued with ego problems or infected by braggadocio, leaving the trash talk to lesser competitors like Justin Gatlin who comes off looking particularly narcissistic but lacking in the talent to pull off his claims of glory.

In the lead-up to the Rio Olympics, Bolt, in addition to having motivational problems with burnout from such intense training over so many years, suffers from three potentially debilitating physical ailments: a twisted ankle done away from training at a club, the flu, and a pulled hamstring at the Jamaican Olympic trails which forces him to pull out of the competition and only be allowed on the team with a waiver. Having won six gold medals in the previous two Olympics, the drama finally comes down to the question of if Bolt can be prepared in time for his events and if age and injury, the great leveler in sport, will finally get the better of him and prevent his accomplishing the unthinkable and unprecedented achievement of winning gold medals in the same three events over three successive Olympics. Great sports stars like Pele, Serena Williams, Sebastian Coe, and others weigh in sporadically during the documentary on their opinions of the man and the athlete, and Bolt himself, armed with a video camera, records his thoughts during sleepless nights, going stir crazy in hotels at competitions, and occasionally sharing his opinions on his rivals, his friends, and his inspirations.

The film is framed at 1.78:1 and is presented in a transfer that’s been anamorphically enhanced for widescreen televisions. Sharpness is dependent on the quality of the various video and film footage from the superstar’s career with much of it looking very good indeed but occasionally being plagued with contouring and less than crisp camera operation. Color is quite good even in the oldest footage, and all of the more recently shot scenes hold up nicely in standard definition. Some of the thick Jamaican dialects are subtitled in white, and the titles are always easy to read. The movie has been divided into 12 chapters.

The Dolby Digital 5.1 sound mix is occasionally on the intense side with volume adjustments possibly needed on certain equipment. Music gets the majority of the rear surround activity with crowd reactions at the three Olympic events also filtered into the complete soundstage. Conversations and comments have been placed in the front channel. Ian Arber’s music also can be a little on the loud side with some slight distortion.

The Making of I Am Bolt (23:24, HD): directors Benjamin and Gabe Turner describe the easy working relationship with Bolt and his team with lots of behind-the-scenes shots of the superstar interacting with playful banter with the film crew and his directors.

An entertaining and informative documentary on the life of one of the world’s most famous and popular athletes, I Am Bolt offers a satisfying look at the man and his sport and is an enjoyable viewing experience even for those who aren’t fans of track and field events. 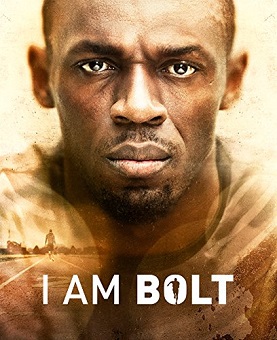