The sixth season of HBO’s popular series Game of Thrones answers and resolves a number of questions viewers were left with at the end of season five. The season also has some surprising guest cameos and the return of some characters thought long forgotten.

As a series unfolds over several seasons, it becomes increasingly difficult to discuss and review latter seasons without revealing any major and minor spoilers. Such is the case with Game of Thrones, based on George R. R. Martin’s A Song of Ice and Fire series of novels. If you are concerned about said spoilers, I suggest you skip down to the Video, Audio, and Overall sections of this review.

As season six opens, we find that Sansa Stark (Sophie Turner) and Theon Greyjoy (Alfie Allen) somehow survived their leap from the top of Winterfell (the snow broke their fall?) and are on the run from Ramsay’s (Iwan Rheon) troops and dogs, but are saved by Brienne (Gwendoline Christie) and Podrick (Daniel Portman). Theon returns to his home in the Iron Islands, while Sansa heads towards Castle Black. Jon Snow (Kit Harrington), who was assassinated by a group of mutineers led by Thorne and Olly, is resurrected by Melisandre (Carice van Houten) to resume command at Castle Black, which he declines after his assassinators are brought to justice. Sansa meets up with Jon, and they try to mount an army to take back Winterfell from Ramsay.

Meanwhile, in King’s Landing, Jaime Lannister (Nikolaj Coster-Waldau) arrives from Dorn with the body of his daughter Myrcella. He and Cersei (Lena Headey) vow revenge on Dorn, while Cersei is also plotting her revenge against the High Sparrow (Jonathan Price) for the humiliation he caused her to atone for her sins.

Arya Stark (Maisie Williams) is blind and begging on the streets of Braavos, but her sight is restored in exchange for a mission. Bran Stark (Isaac Hempstead Wright) continues his training with the Three-Eyed Raven (Max von Sydow), learning secrets about his father and how the White Walkers came to be.

Tyrion Lannister (Peter Dinklage) assumes leadership of Meereen while Daenerys Targayen (Emila Clarke) tries to escape from her captivity in Essos, able to maintain peace for a short time before the Masters launch an attack on the city.

Season six continues the high production values that the series is known for, with beautiful locations and excellent use of computer-generated imagery to complete its fantasy world. Peter Dinklage continues to delight as the dwarf Tyrion, while the rest of the cast play their roles at the top of their game. There are a few cameos this season, including Ian McShane and the previously mentioned Max von Sydow.

Season six sparkles on Blu-ray, just as other seasons have, with near-reference quality video that is a major improvement over the more compressed (and interlaced) cable/satellite/streaming broadcasts. As with previous seasons, each location in the seven kingdoms has its own color palette, and where necessary, colors are vibrant without ever appearing over saturated. Contrast is exceptional, with deep blacks that retain strong shadow detail. Speaking of detail, that is also exceptional, particularly in battle scars on characters’ faces, and textures in both fabric and scenery. I did notice a few very brief glimpses of minor banding, but those were few and far between.

Dolby Atmos is now the preferred soundtrack of choice on Blu-ray, and the sound designers and mixers continue to use it effectively, making it a great demo experience. My only complaint (which I’ve had ever since HBO re-issued previous seasons with Atmos) is that legacy (and lossy) Dolby Digital 5.1 is still the default track on these discs. There is really no need for this, since Atmos has a Dolby TrueHD 7.1 core, which has the capability to fold down to TrueHD 5.1, and still requires a legacy Dolby 5.1 track to fall back on should the user’s equipment not be compatible. I find it annoying to have to go into the audio menu to select Atmos every time I insert a disc.

The Dolby Atmos track is a truly immersive experience, even when played back on a non-Atmos system in a 5.1 configuration with additional front height speakers and Pro-Logic IIz enabled. Surrounds are very active during battle sequences, with fire balls, arrows, and dragons flying overhead and around you. LFE helps give explosions a room-shattering boom. Yet, dialogue is always clear and understandable without getting lost in the mix.

Before we get to the wealth of special features, let’s talk for a moment about packaging. HBO has not been very consistent with the packaging of Game of Thrones on Blu-ray. While they have remained somewhat consistent with digipack for debut releases of each season, it has always been a chore to get a disc out. Seasons 1 thru 5 were essentially a clear plastic sleeve covering a cardboard sleeve, revealing a fold out that contained digipack spindles for each of the 4 or 5 discs, and a pocket for that season’s episode guide. When seasons 1 thru 4 were re-issued with Dolby Atmos, these were only available as steelbooks with a spindle on each side where the discs were stacked on top of one another. With the release of Season Six, the package consists of a cardboard sleeve that is glued on top and must be removed to pull out the discs in a foldout that are inside another sleeve. The foldout is made of much thinner paper material than prior seasons, and the discs are situated in a way that disc one must be removed to get to disc two, and disc one must be removed again to place disc two in its place, and there is no Episode Guide booklet. To make matters worse, seasons 5 and 6 were also released as Best Buy exclusive steelbooks (which are much thinner and take up less shelf space). Suffice it to say, on my shelf, my Game of Thrones Blu-ray collection is a mess.

Also, Audio Commentaries cannot be accessed unless your player is set up with BD Audio Mix set to ON or select the track directly from your player’s audio select menu.

In Episode Guides for each episode: The exhaustive compendium provides descriptions of the show’s characters, locations, and history in context with events of each episode.

Recreating the Dothraki World (1080p; 20:15): As the title indicates, this is a look at the production design of the Dothraki world, a place not seen since the first season.

The Battle of the Bastards (1080p; 30:01): A behind the scenes look at the largest battle sequence in the series’ history.

Digital HD Copy: An insert contains a code to redeem a digital copy through Ultraviolet partners, which also includes behind the scenes featurettes for many of the episodes.

Season six beautifully sets up the viewer for the final two seasons, which will begin airing in Summer 2017. As expected, the audio and video on this set are outstanding, and contains a wealth of special features. The big disappointment is the packaging. 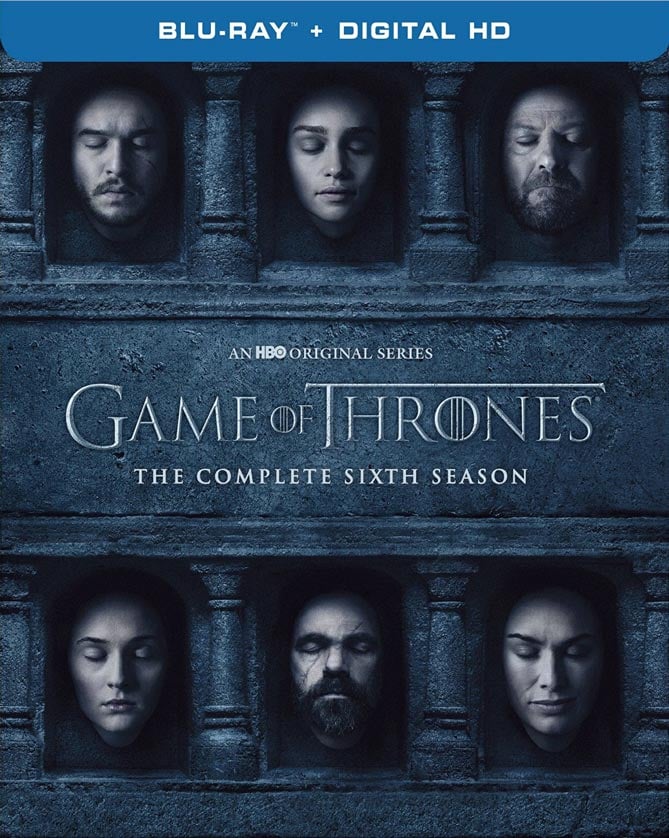