Forum List What's new Dark Style Change width
Log in Register
What's new Search
Menu
Log in
Register
Navigation
Install the app
More options
Dark Style
Close Menu
Posted on December 3, 2016 by Matt Hough
You are using an out of date browser. It may not display this or other websites correctly.
You should upgrade or use an alternative browser.
Violent, sobering coming-of-age story is not for all tastes. 3.5 Stars

The theft of personal property leads to a startling coming-of-age story set in urban California ghettos in Justin Tipping’s Kicks.

The theft of personal property leads to a startling coming-of-age story set in urban California ghettos in Justin Tipping’s Kicks. It’s angry, violent, and certainly not for all tastes, but it offers a look at the perils inherent in a cultural vacuum where poverty and a lack of education and ambition leads to moral choices that eventually revolve around life and death, all over a pair of shoes.

Fifteen-year old Brandon (Jahking Guillory) finds himself the ultimate outsider with no athletic prowess and with no seeming interest from the opposite sex. A pair of prized Air Jordans, however, might make the difference in his popularity and desirability, and when he’s able to buy a pair from a street hustler, he gets to enjoy one day where he’s not for a change invisible to his two friends Rico (Christopher Meyer) and Albert (Christopher Jordan Wallace) or the neighborhood girls. But street thug Flaco (Kofi Siriboe) wastes no time in giving Brandon a beat down and taking the shoes for his young son, an act that sends Brandon on a determined quest to get back his shoes no matter the cost. His ex-con uncle Marlon (Mahershala Ali) has information on Flaco’s whereabouts as well as a gun which Brandon borrows to bolster his courage. Little does he know how necessary it will be in dealing with the Flacos of the world.

Director Justin Tipping has co-written the movie’s script with Joshua Beirne-Golden offering a slice of-life look at ghetto teens of today with no ambition or drive, just existing day-to-day to smoke, drink, find sex partners, and hang out trash talking one another. Brandon’s one day of happiness with his new shoes captures an almost idyllic tone alien to the rest of the movie, a tone that gets uglier and more desperate and deadly with each passing minute. There’s a code of ownership here that’s beyond comprehension: someone else’s property becomes yours once you steal it, but if that rightful owner takes it back, you’re the one who’s been victimized? Nonsense, of course, but it’s the code that’s under consideration here and around which the entire plot revolves. Brandon’s commitment to risk his life and the lives of his friends in retrieving his property is unshakable (no parents, teachers, or police ever have a presence in this world, a bit of a stretch given the amount of gunplay, bullying, and wheelie competitions on display throughout), and Tipping gets not only an outstanding performance from Jahking Guillory, but his determination leads to the film’s most exciting and tension-filled sequence: prowling around Flaco’s house in the near darkness looking for his shoes with guns at the ready and a young child caught in the middle. Tipping and Beirne-Golden have incorporated an annoying symbol throughout the movie: an astronaut representing not only Brandon’s sense of isolation and independence from the world but also his childlike hold on life which eventually gets destroyed as his quest deepens and darkens. It seems both intrusive and unnecessary to have Brandon’s emotions and physical presence echoed constantly with this floating figure in the background.

Brandon’s path to maturity is a rough and tumble one, and lanky, delicate-featured actor Jahking Guillory dives head-first into the storytelling with an excellent performance. Best friends played by Christopher Meyer (the stud of the trio) and Christopher Jordan Wallace (the clown) have their roles down pat, too. Kofi Siriboe exudes a dangerous, unpredictable mix of menace and calm as the thuggish Flaco, and Mahershala Ali adds gravitas as Brandon’s uncle who offers words of wisdom but no physical aid in his quest for his kicks.

The film’s theatrical aspect ratio of 2.40:1 is faithfully rendered in this 1080p transfer using the AVC codec. Sharpness is more often than not first-rate with plenty of detail in hair and clothes and with only occasional soft shots (often of the symbolic astronaut character which are likely deliberately blurry). Color is solid with accurate skin tones, and contrast has been consistently maintained for excellent picture quality. Black levels are also very good with details in shadows (especially during that house search sequence) most impressive. The movie has been divided into 20 chapters.

The DTS-HD Master Audio 5.1 sound mix is a professional job from beginning to end with an occasionally overwhelming use of the entire soundfield to simulate Brandon’s outer space fantasies (with a little distortion along the way). Dialogue has been masterfully recorded and has been placed in the center channel. A succession of rap and hip-hop tunes (often identified on-screen to introduce scenes where they’re being utilized) along with Brian Reitzell’s score makes use of the fronts and rears with surety. Atmospheric effects with gunshots don’t offer quite the impact one might expect.

Kicks: One on One (2:31, HD): stars Jahking Guillory, Christopher Jordan Wallace, Christopher Meyer, and Kofi Siriboe talk about their characters and mention the film’s themes.

Picture Gallery: twenty-six stills and behind-the-scenes shots can be flipped through manually.

A sober, upsetting view of the urban teen world of today with its aimlessness and violence forms the backdrop for Kicks. The storytelling will hold your attention if you decide to rent or buy the film, and first-time director Justin Tipping is one we’ll certainly be hearing from again. 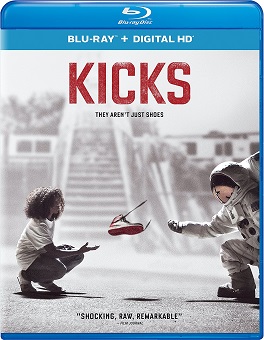