Forum List What's new Dark Style Change width
Log in Register
What's new Search
Menu
Log in
Register
Navigation
Install the app
More options
Dark Style
Close Menu
Posted on December 1, 2016 by Todd Erwin
You are using an out of date browser. It may not display this or other websites correctly.
You should upgrade or use an alternative browser.
Entertaining and formulaic action thriller 3 Stars

Jason Statham returns as Arthur Bishop in Mechanic Resurrection, a sequel to the 2011 remake of The Mechanic. While more entertaining than its predecessor, it’s still a by-the-numbers Statham action flick.

Presumed dead, hit man (aka “Mechanic”) Arthur Bishop (Jason Statham) is about to be called out of retirement when his past catches up with him in Brazil. A messenger greets him at his favorite watering hole, trying to blackmail him into killing three men in exchange for not revealing his secret. He refuses, a fight breaks out, and Bishop manages to escape to a small island resort in Thailand run by his friend Mei (Michelle Yeoh). While hiding out on the island, Bishop discovers that the woman in Brazil works for an old acquaintance of his, Riah Craine (Sam Hazeldine). At about the same time, another attractive woman arrives on the island, Gina Thorne (Jessica Alba), an apparent victim of domestic abuse. When Gina’s boyfriend Frank gets drunk and starts attacking her on their boat, Mei asks Bishop to come to her rescue. Bishop arrives and kills Frank in the process.

And this is where Mechanic Resurrection goes completely off the rails in logic. Gina was a plant by Craine to get Bishop to fall in love with Gina after rescuing her from Frank’s violent attacks, in which his goons would come and kidnap Gina in exchange for killing the same three men he refused to do back in Brazil. Gina is being blackmailed to go through with this in order to save the lives of her workers and refugees at her shelter for human trafficking victims in Cambodia. So, guess what happens? Bishop falls in love with Gina, Gina gets kidnapped by Craine’s goons and the ransom is killing three men and making the deaths look like accidents.

What follows are a series of stunt set pieces (directed as a second unit by Vic Armstrong) that are interesting to watch but not exactly original. The first involves taking out an African war lord in a high security prison on a remote island in Malaysia. The second is a child trafficker who goes for a swim at the same time each day in his penthouse pool that literally overlooks the city of Sydney, Australia (in a scene that is reminiscent of Tom Cruise climbing up a skyscraper in Mission Impossible Ghost Protocol). The third is ludicrous, taking out weapons dealer Max Adams (Tommy Lee Jones) who resides in a high security monument to Communism in Bulgaria. Instead of taking out Adams, Bishop partners with him to devise a plan of rescuing Gina and talking out Craine.

The performances are about what one would expect from a movie of this sort, the highlights being Alba and Yeoh, who actually have some emotions to show. Statham portrays Bishop as a cold and ruthless killer. Tommy Lee Jones, who only appears in a handful of scenes despite being billed third above the line, is a waste of talent as Adams, who doesn’t have much to do in the small amount of screen time afforded to him. I found this sequel to be much better than its predecessor, but that’s not saying much.

Mechanic Resurrection was captured digitally with Red and Arri cameras (I swear I saw an Arri in one of the featurettes), and looks surprisingly good in 4K UHD with HDR. In some cases, it looks too good, as it is very obvious that several sequences were filmed in front of a blue (or green) screen on a soundstage rather than on-location. The opening restaurant sequence is a glaring example, as the image goes very soft around the edges whenever the skyline is visible, something one tends to se a lot on episodic television such as Bones and Agents of SHIELD. On the other hand, colors do pop when compared to the 1080p Blu-ray, especially the sequences on Mei’s island resort. Fine detail is quite good overall, revealing stubble growth in Statham’s beard, for example. Contrast is improved with slightly darker black levels over the Blu-ray, providing better shadow detail.

Mechanic Resurrection contains a very immersive Dolby Atmos track (with Dolby TrueHD 7.1 core), even when played back on a non-Atmos system in a 5.1 configuration with additional front height speakers and Pro-Logic IIz enabled. Helicopters, paragliders, ocean liners, etc. pan seamlessly from one end of the room to another, the heights even make good use of Craine’s instructional narration to Bishop as he moves on to the next assignment. Mark Isham’s score is used effectively to also immerse the audience in the action, while dialogue is clear and doesn’t get overwhelmed in the mix.

As with most 4K UHD Blu-ray discs, the features can be found on the included 1080p Blu-ray disc.

Engineering the Sequel: Inside Mechanic Resurrection (1080p; 9:55): By-the-numbers piece on the making of the film.

Scoring the Action Film with Mark Isham (1080p; 9:00): This is the best featurette on the disc, as Isham discusses his early music influences, how he got into film scoring, and his use of themes in the film.

Michelle Yeoh, Secret Ally (1080p; 1:14): Another all too brief featurette on the actress and her role in the film.

Check your brain at the door before inserting Mechanic Resurrection into your UHD Blu-ray player and pressing play. Video is slightly improved , but the real highlight is the Dolby Atmos soundtrack, which is also included on the 1080p Blu-ray.

I viewed this 4K/UHD disc this morning and thought it looked very good. Movie is mediocre, but the audio and video presentations were top-notched.
You must log in or register to reply here. 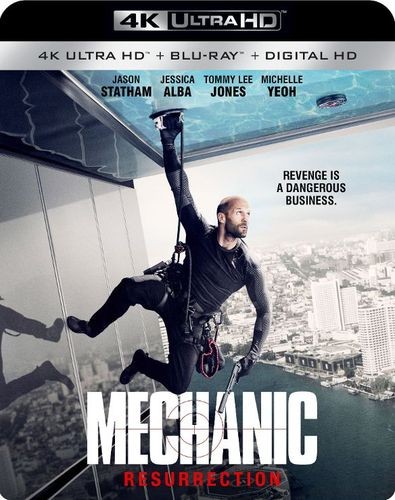