It was surely only a matter of time before BenQ would develop a projector to sit within the home theater pricing ‘sweetspot’, that magic sub-$3,000 category where the advantages of a high-quality large projected image arguably start to challenge those of justifying a 75-inch-plus flat panel display. Until this past year, the Taiwanese manufacturer had capitalized on its smaller footprint semi-portable TK- and HT- models at the relative low end, while also promoting its substantially larger HT8000/9000 series models for permanent installation at the $8k-plus higher end. In the spring of 2019, BenQ announced that it would start shipping the CinePrime HT5550 (currently priced at $2,699 MSRP), a dark grey-colored, dedicated room-friendly beamer set to go head-to-head with similarly-priced models from the likes of Epson and Optoma.

Despite the far larger form factor of the HT5550 – and when compared to the previously HTF-reviewed HT3550 – there is a fair amount of commonality between the two products in terms of general operability and performance. However, the bulkier housing of the unit reviewed here is warranted by the extensive lens shift and zoom features, allowing further placement flexibility for a dedicated room. The HT5550 boasts an ability to reproduce 100% of the professional digital cinema DCI-P3 color space, care of the company’s home-grown CinematicColor and HDR-PRO technologies, and a contrast ratio of 100,000:1, thus exhibiting far more competent black levels than its smaller sibling.

What new users of this latest model from BenQ will first notice is the absolutely stunning contemporary design of the product, making it possibly the sexiest-looking home theater projector out there. A gun-metal fascia contrasts the darker grey main housing exterior, while air intake and exhaust grilles flanking the lens assembly neatly fit into the curved forms of the outer edges. The low-profile 349mm (13.7in) depth gives it nearly a 4-inch placement advantage over the Epson 5050UB, while a dust cover hood over the lens means you get an extra layer of glass protection when the projector is inverted for ceiling mounting (and therefore usually less accessible for cleaning).

Like the HT3550, the HT5550 uses the same 0.47-inch 1920 x 1080 DLP XPR single chip plus 6-segment (RGBRGB) color wheel, achieving 8.3 million pixels on screen by pixel-shifting four times per frame. There is also high dynamic range capability in the form HDR10 and HLG, both of which are automatically detected by the projector which, in turn, triggers the HDR10 picture mode (with added filter applied for wide color gamut of 100% of DCI-P3).

Other picture modes comprise Bright, Vivid TV, Cinema, D. Cinema and User. You can also pull up a 3D and unlockable ISF Night and Day modes. Brightness is rated at 1,800 ANSI lumens while the 1.36 – 2.18 throw ratio ensures a 100-inch diagonal screen image from a distance of just under 10 feet, and the extensive manual lens shift allows for +/-60% and +/-23% in the vertical and horizontal plains, respectively. Because lens shift, focus and zoom are all manually controlled, you might want to consider rear shelf rather than ceiling placement, particularly if you have a constant height (CIH) setup and wish to zoom for 2.39 content. The 11-piece lens includes two precision-molded elements for color accuracy and associated mitigation of artifacts. The HT5550 comes with its own unique color calibration report inside the box, showing Delta E performance to less than 3 to guarantee accurate colors as defined by Rec.709/DCI-P3 standards.

Although colors are exemplary out of the box, particularly with the WCG deployed in HDR10 mode, it’s always worth considering spending the extra couple of hundred dollars on professional calibration for your own specific viewing environment. I did perceive a bias where blues appeared slightly oversaturated on this review unit, so getting a pro to tweak out any anomalies is always good practice. 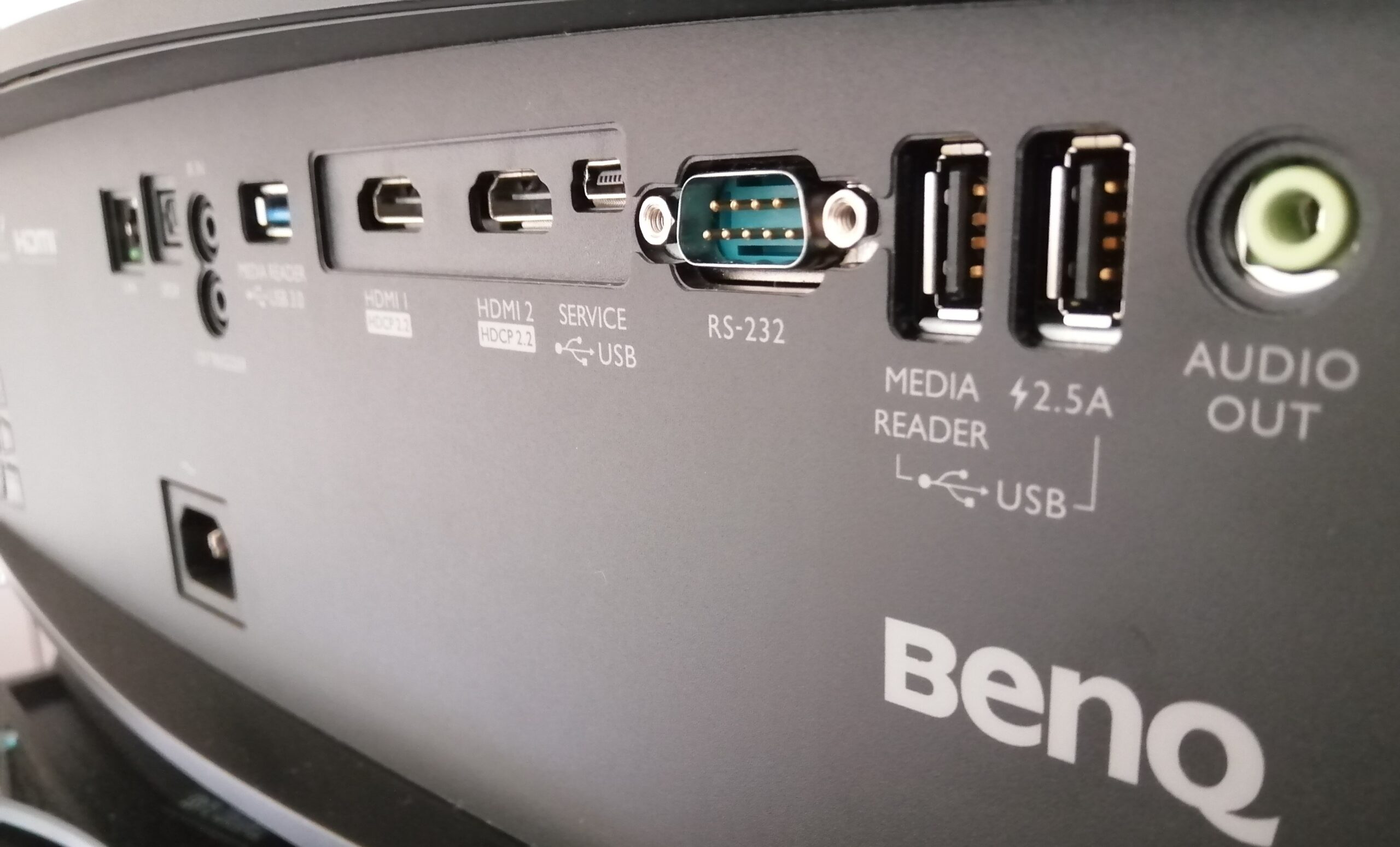 Similar to my review of the HT3550, I used a 90-inch 1.1 gain fixed frame screen in a dedicated light-controlled room, but this time with rear shelf-placement and minimal vertical lens shift. I relied on Cinema (REC.709) for 1080p material and HDR10 (with WCG filter deployed) primarily for 4K UHD discs.

The HT5550 is capable of extraordinarily detailed images from the 4K UHD disc of 2001: A Space Odyssey (1968). The interior of the Discovery spaceship as Keir Dullea jogs around the rotating forward orb delivers breath-taking images. During the first extended conversation with Hal at the ship’s workstation, the embedded video monitors pop with color, even though set against black backgrounds, and focus uniformity across the screen is surprisingly consistent, making for a truly absorbing picture. The same can be said for the sequences in the pod bay where color-accurate spacesuits sit alongside complex machinery and clearly legible small-font texts. While the blacks of space fall short of the inkiness associated with some of the competitors’ projectors, you will be hard-pressed not to delight in the sheer detail on display here.

The projector’s wide color gamut and HDR competency are beautifully illustrated in the 4K UHD disc of Aquaman (2018) where the range of hues of blue and turquoise seem infinite, particularly during the IMAX-shot sequences in The Trench. The HT5550 handles these scenes without a hint of stumbling, and the setpiece where Heard and Momoa meet with Defoe in the underwater shipwreck is an eye-popping example of textbook HDR, with its myriad of dark shadows and bright highlights. Some of the images here are so accurately rendered by the BenQ that they cry out for larger screen dimensions. Furthermore, HDR performance on the HT5550 is always primed for comparatively bright delivery, even at the default ‘0’ setting, so you’re never left wondering if your 1080p BD version of the movie might look better(!). This fact alone is a highly reassuring advancement over earlier generations of 4K/HDR projectors.

The sweeping desert panoramas in the Lawrence of Arabia (1962) SDR 1080p disc with its 8K-scanned and 4K DI are also represented in Cinema Mode with strikingly vivid detail. The night-time camp scenes where Lawrence (Peter O’Toole) meets with Prince Faisal (Alec Guinness) also show that the HT5550 can decipher layers of shadow satisfyingly well. You should be aware that where scenes transition from light to dark, or where tones change within a scene, you can see noticeable pumping of the auto-iris. This function should be set to ‘on’ to increase contrast and black level, but you might notice its not-always-smooth gradations.

As is typical with single-chip DLP projectors, there is a high-pitched whining associated with the spinning color wheel and a sometimes noisy auto-iris springing into action. These sounds will usually be masked by an audio system, but might nevertheless be a factor in the placement of the HT5550.

Some of you will have seen my earlier review of the Epson 6050UB, or to specify its direct sub-$3k fair competitor, the 5050UB. I was lucky enough to have both the 6050UB and HT5550 in my possession at the same time, which allowed me to become familiar with the inherent qualities of the two products. Both are extremely impressive projectors for their respective MSRP $3k and $2.7k price tags, but because they use different imaging technologies, namely LCD and DLP, the pictures from each exhibit different characteristics too. If I was to make an anecdotal comment about the look of each projector’s image – and as a very broad view which I hope will be helpful to HTF members – I felt that the HT5550 faired a little better on effects-driven, comic book or digitally-shot movies. The Epson, by contrast, with its improved black level and slightly more organic image, was my go-to for, say, pre-millennium content shot on 35mm or 65mm film. Of course, both projectors are more than competent at each discipline, but this is merely a subjective observation.

The BenQ HT5550 delivers one hell of a bang-for-buck experience. It’s ability to display pictures with such precision, exploit the entire DCI-P3 color spectrum and deliver truly impressive HDR performance, means you can beam a beautiful image onto your screen. It may be a little noisy, but if you’re in the market for a projector for a dedicated room, you should definitely give this one a whirl.

The BenQ CinePrime HT5550 is available from Amazon here.