Ultimate Ears Boom 2 creates an instant portable party wherever you may be, on land or in water!


I have always been fascinated by Ultimate Ears speakers since I first saw them at one of Logitech's trade shows a few years back. It hasn't been until recently that I have been able to get my hands on one of these babies, and I must say, I am very impressed!

Leave it to UE to design something rather unique that stands out from the pack. With its cylindrical shape, and standing at only 7 1/8" inches high, it's the kind of portable speaker that isn't obtrusive when sitting in a room, and can easily lose itself in a suitcase or bag when traveling. With a mere weight of 1.2 lbs.it has the ability to take music anywhere you need it to be. 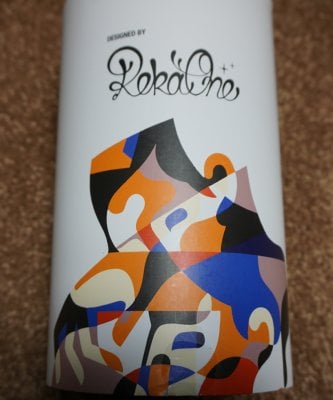 The UE BOOM was first introduced in 2013. In 2015, Logitech revised the design adding waterproofing, increased volume and bluetooth capability in what has now become the UE BOOM 2. This year the company has introduced another revision, this time across its entire face, with its "Lost In Time" Limited Edition. The product represents a collaboration with renowned Australian street artist James Reka. At the end of this review, I am going to include a press release that gives far more informative insight into Mr. Reka and his involvement on the design of this Limited Edition speaker. As you will see from the photos included here, the UE BOOM 2 LE has a very fresh, colorful design across its tightly woven fabric that covers the speaker. It looks very inviting whether situated on a home shelf, a backyard picnic table, or on a water-floating raft. 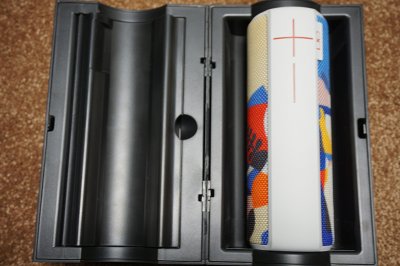 The packaging is as impressive as the speaker itself. As you open the round, plastic tube, you not only find the speaker sitting in its own cubicle, but there is another compartment that opens up to reveal charging cable and wall plug. The setup is amazingly easy, and it's illustrated by diagrams on the inside packaging. Once you have fully charged the BOOM 2, simply press the button on top of the device. A small light flashes to indicate pairing mode has begun. Simply find the device in the bluetooth settings area of your smartphone or tablet. I had my speaker paired within seconds.

I have to say that I was immediately awestruck the moment I started streaming Alicia Keys "New York State of Mind" from my iPhone. The opening piano chords with Alicia's vocals sounded very distinct and clear. I could immediately sense that I was listening to sound that was being reproduced exceptionally well. As the song revved up to a crescendo, I turned the volume up very high. At this point, the BOOM 2 handled the music very well, though there was a bit of distortion present. It does seem that the BOOM 2 is handling its own EQ adjustments as the volume increases so to prevent muddling.

Boom 2 packs two 45mm active drivers and two 45mm by 80mm passive drivers into its shell. Volume can be controlled by pressing the + and - buttons on the side of the speaker or through your smart device.

To give you an example of how loud BOOM 2 really is, I brought this product to my workplace last week. I am the guy in charge of playing music for a workforce of 100 employees in a small warehouse type building. When the building was empty early in the morning, I played BOOM 2 at full volume. I could easily hear it from one end of the building to the other. As the day progressed, more employees entered the building and work noise levels increased. The volume of BOOM 2 still managed to barely peak above the noise level. I was quite impressed.

What you won't get with the BOOM 2 is earth-shattering bass response. In fact, bass response was really nonexistent. This type of speaker is designed more for the person "on the go" who wants to listen to Spotify while working out, or to play music while out in the backyard or on a camping trip. I must say, there's a lot of volume output from this device -- and if one is not enough -- it can easily be paired wirelessly with additional BOOM units to expand the sound even further. 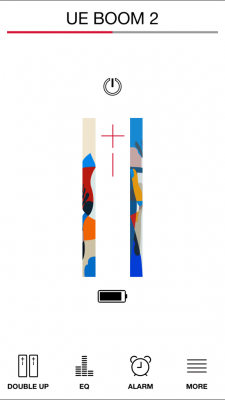 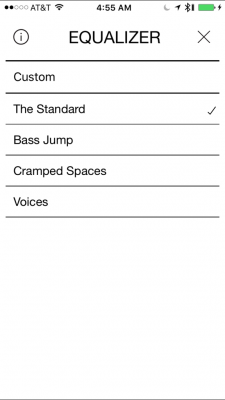 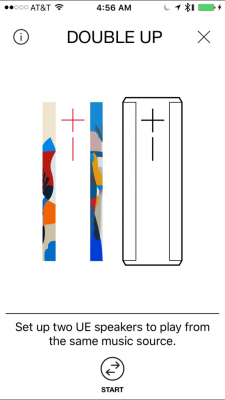 The free UE BOOM app available for smartphones and tablets provides information at-a-glance concerning your device status as well as additional settings. For instance, an equalizer allows you to refine the quality. During my test, I really didn't see a significant difference in performance by switching from the different audio settings. Sadly, bass response was not significantly improved in the "Bass Jump" EQ setting. If you want to add additional BOOM speakers to increase overall coverage, the app will absolutely take you through that pairing process. One of the more interesting things the UE BOOM app allows you to do is set an alarm which will awaken the device with the last song you played, or, a song selection from your stored music library. BOOM 2 also supports gestures. You can change a song simply by tapping the top of the device. Tap twice to skip songs, or three times to go backwards. This was the area I had the most problems with. With my iPhone 6S Plus streaming music to the speaker, I was unable to accomplish anything by tapping on the top of the device. It did not seem to respond to my touch. Constant taps only paused the music and I had to manually restart it on the phone. I even whacked the top of the unit a few times and it ended up just pausing the music instead of advancing it forward or back. I did check the settings on the app, and gesture control was turned on. From other reviews I have read, this feature does work, but I was disappointed that it didn't for myself. Personally, I would rather leave the speaker in one place and control it with my phone or tablet from afar, but I can see how this feature would be great outdoors when reaching for your pocket device becomes cumbersome.

Charging and auxiliary ports are located beneath the speaker. A rechargeable lithium battery is rated up to 15 hours worth of usage. That falls in line with the amount of playback time I received. Wall charger and cable are included in the package.

In case you noticed, I did talk about being able to take the BOOM 2 with you while engaged in water activities. That's because the speaker is IPX7 rated -- meaning you can immerse it in liquid, up to 1m deep for up to 30 minutes without worrying about damage to the device. So, if you accidentally leave the speaker out in the rain or drop it in the river, chances are, it will survive. 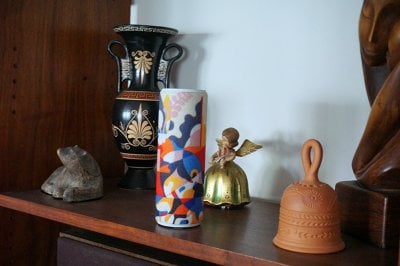 
The Ulitmate Ears Boom 2 is a beautifully designed, powerful bluetooth speaker. It's made to be rugged so that you can go from the home, to the suitcase, to the outdoors and not worry about the weather elements and accidental drops getting in the way. It offers full, rich, room-filling sound that would satisfy most audiophiles as long as expectations are put on hold concerning bass output.

This Limited Edition model, which features the colorful eye-popping artwork of James Reka across its entire mesh, is attractive enough to sit on your home shelf or to be the portable highlight of your outdoor party/adventure.

* UE once again offers a bluetooth speaker that delivers powerful near 360-degree audio in a small portable
footprint.
* 15 hour battery life
* Ability to extend its range by linking to another Boom device


Inspired by pop culture, cartoons and illustrations, Reka spent more than a decade refining his emblematic aesthetic throughout Melbourne’s inner-suburb alleyways and train lines. Known for his clean and distinctive style, fusion of high and low art, and ability to change mediums and locations, Reka’s art can be seen from the streets of Japan, Paris, Brooklyn and Berlin to solo art shows around the world to a permanent collection in the National Gallery of Australia and, now, on the acoustic skin of UE BOOM 2.


“Reka has continued to redefine what street art is and where it lives,” said Charlotte Johs, general manager of Ultimate Ears. “Ultimate Ears believes there should be no boundaries as to where art can be seen and music can be heard. We’re lucky to work with an artist who complements our philosophy.”


UE continues to redefine customization in the industry. Since its inception, UE’s family of speakers have been designed with fabric skin. This fabric skin has made it possible to create more than 50 artist and custom edition speakers. By enlisting artists to create special limited-run artist editions, UE celebrates the natural harmonies between music and art by introducing them in tandem to the world.

“UE BOOM 2 Lost Time Limited Edition refers to crucial moments of self-reflection, which remind me of being lost in the moment,” Reka said. “Similarly, music can often be an escape, allowing us to transcend time and space, which made this collaboration with Ultimate Ears a natural fit.”

A limited number of UE BOOM 2 Lost Time Edition speakers are expected to be available in North America, Australia and select countries in Europe beginning April 2016, for a suggested retail price of $199.99. For more information, please visit www.ultimateears.com. To find out more about Reka, please visit rekaone.com.

James Reka is a young, contemporary Australian graffiti and street artist based in Berlin, Germany. His origins lie in alleyways and train lines of Melbourne’s inner-suburbs where he spent over a decade refining his now-emblematic aesthetic. Reka’s works of art have come to represent the beginnings of a new style of street art: clean, unique and not necessarily “on the street.” Surrealist, abstracted creatures emerge from his mind, communicating through strong lines, dynamic movement and bold colors. With influences in pop culture, cartoons and illustration, Reka’s style has become known for its’ fusion of high and low art and represent a paradox between sharp design and graffiti, combined together with passion and spray paint.

Ultimate Ears is transforming the way people experience music, together, out in the world. UE first revolutionized the way artists interact with their concert audiences by reinventing the on-stage monitor, turning it into a custom-fitted earphone. Today, Ultimate Ears continues stronger than ever with its award-winning family of wireless speakers that are designed for people, their friends and wherever life takes them. And with new features and experiences regularly released through software updates, UE speakers just keep getting better. For more information, please visit www.ultimateears.com. #MakeMusicSocial