Epson has carved out a niche for itself in recent years by offering up full-featured home cinema projectors with excellent black levels and rich colors at a competitive price. As each approximate 24-month product cycle turns around, the company seemingly never rests on its laurels, and manages to fine-tune performance and operability to squeeze out yet more convincing and cinematic imagery from within a given chassis, and usually for roughly the same price. The Epson 6050UB proves no exception to this rule.

There are a few things worth pointing out before discussing some of the wide-ranging features on this latest model from the Japanese manufacturer. Simply because of my geographical location on the ‘other side of the pond’, the unit we’re testing here is actually the Europe-based version of the US-market 6050UB model, known as the EH-TW9400. Stateside, the black-bodied 6050UB is considered an integration channel product, and is therefore provided with a spare lamp, ceiling mount, rear cable cover and an extra year of warranty. The 6050UB also boasts a claimed 1,200,000:1 contrast ratio, as opposed to the white-bodied 5050UB’s claimed 1,000,000:1 contrast ratio. My understanding is that glass lens elements with slightly superior performance from the production line are fitted into the black 6050UBs and EH-TW9400s, and therefore achieve the slightly improved figures. Secondly, the European version omits a preset B&W picture mode. With the exception of these slight differences among SKUs, we hope you will forgive our indiscretion. MSRPs of the 6050UB and 5050UB are $3,999 and $2,999, so you should consider both of the above options on offer if you’re planning to take the plunge.

Although adopting the same chassis/body size of the former 5040UB, you should also be aware that the 6050UB and 5050UB are both substantially larger than the former 6010/20/30 generation of Epson UB projectors. This is particularly important if you’re planning to swap one out either on a shelf or via a ceiling mount.

Like its predecessors, the 6040UB and 5040UB, the 6050UB is a 4K ‘Enhanced’ projector, which uses pixel shifting of two 1920 x 1080 positions per frame in the x/y axis to deliver 4.15m pixels on screen. Many might argue this only constitutes ‘Faux-K’ and not the 8m pixels of a native 4K projector (more on that later). The projector also uses Epson’s now tried-and-tested 3LCD technology with three aligned panels for RGB and a 15-glass element lens delivering the image onto the screen. The 6050UB supports high dynamic range technologies in the form of HDR10 and HLG, and Epson also claims 97% reproduction of DCI-P3, the color space you’d expect to find in your local multiplex care of projectors by Barco, Christie, NEC or Sony.

A welcome addition to Epson’s UB line is motorized lens shift with +/-96.3% and +/-47.1% in the vertical and horizontal plains, respectively. Up to 10 lens memory positions can be recorded, with two of your own presets accessible directly from the remote. This is of course useful if you regularly shuttle between 1.78:1 (or 1.85:1) and 2.35:1 aspect ratios in a constant height setup. Furthermore, the 10 memory positions could easily fill up if, like me, you wish to tailor CIH settings for more obscure aspect ratios like 2.0:1 and 2.2:1 (e.g. Lawrence of Arabia and 2001: A Space Odyssey) or lower a 2.76:1 title like Ben-Hur to sit flush with the framed bottom border of your scope screen. Owners of a Panamorph or other brand’s 1.33x scope lens assembly can also make use of the 16:9 horizontally-squeezed anamorphic mode.

Placing flexibility is further enhanced by a throw ratio of 1.35 to 2.84:1 and a zoom factor of 2.1. You can toggle through three settings with the Lens button on the remote to adjust motorized focus, zoom and lens shift, all easily manipulated by pulling up the useful test pattern (which includes 2.35:1 inset horizontal lines). It’s quite a pleasure to be able to focus accurately with your eyes, only inches from the screen. With the addition of two adjustable feet on the front end, the extensive setup features mean you can finalize your projector shelf or ceiling-mounted placement within minutes.

Epson claims the 6050UB’s brightness capability is 2,600 lumens, while half-life of the lamp is rated at 5,000 hours in Eco, 4,000 hours in Medium or 3,500 hours in High lamp modes. Depending on your setup and screen size, you may find you have a more frequent need for the Medium and (rather noisy) High settings for playback of HDR content. With that said, this projector is nothing short of a light canon.

Picture modes comprise Dynamic and Bright Cinema (both of which are designed for well-lit and ambient light conditions), Cinema, Natural and Digital Cinema. Natural’s color accuracy out-of-the-box makes it ideal for SDR content, while Digital Cinema’s expanded DCI-P3 color space should be the go-to for HDR material. Unlike the BenQ W5700, which automatically detects HDR content and switches to an HDR10 preset, you will always have to manually change color mode via the remote for the Epson. There are also two 3D settings, namely 3D Dynamic and 3D Cinema, and glasses can still be purchased as an optional extra. As well as the lens memory function mentioned earlier, you can save up to 10 picture settings memories. I used a couple of online resources to enter light-controlled room settings for Natural and Digital Cinema and then saved the factory defaults in order to find preferential viewing conditions. As with all projectors at this price point, you should consider spending the extra $200 – 300 for a professional calibrator to tailor performance to your specific viewing environment. Gaming fans who need a movie-focused projector for gaming will be impressed by the rated under-30ms input lag. 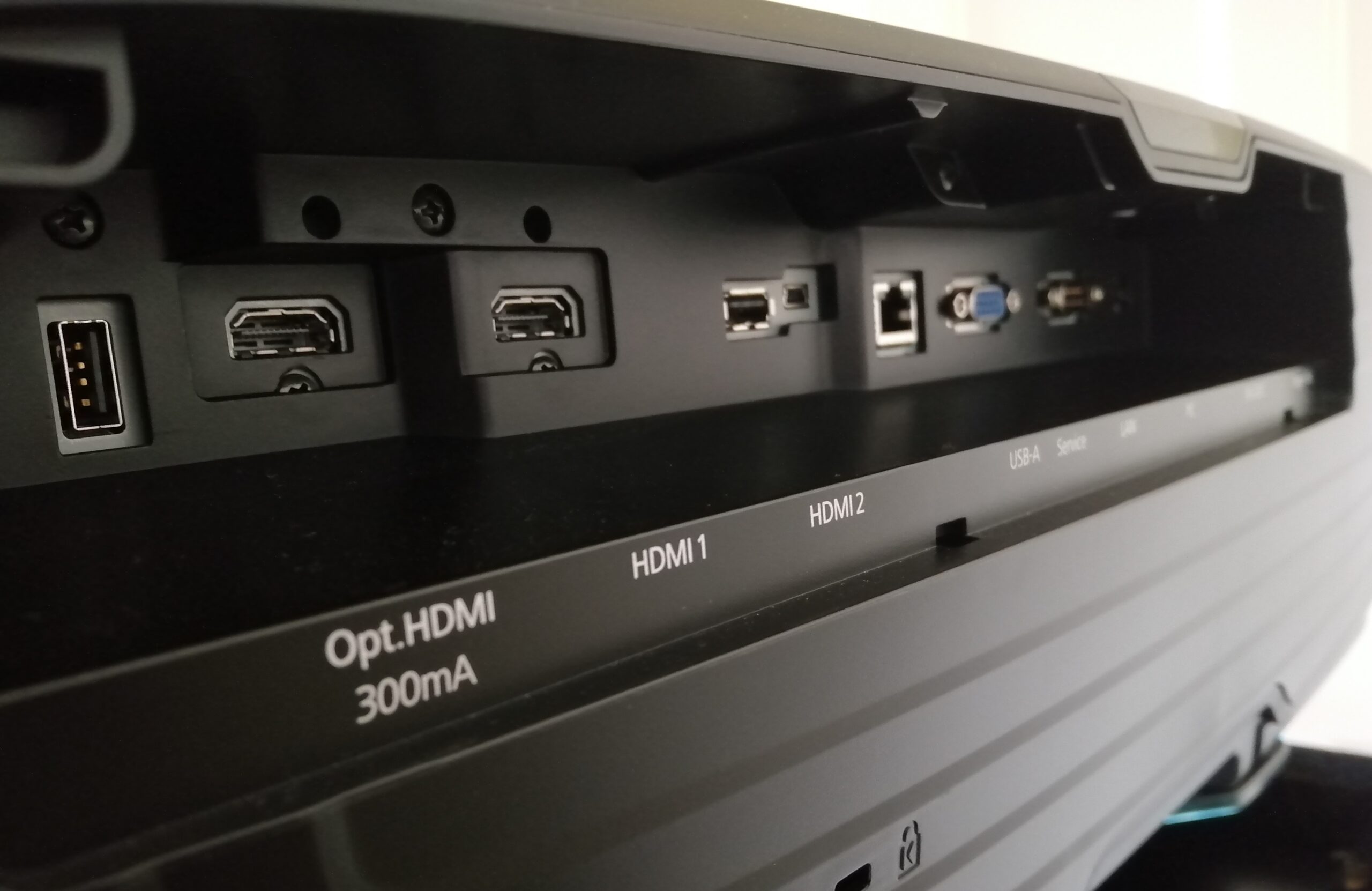 In addition to a seemingly endless number of image enhancement tools in the configuration menu, Epson helps out with image preset modes, which include noise reduction and super-resolution, numbered from 1 to 5. Both preset settings 1 and 2 usually improve perception of image clarity and sharpness. An HDR Setting bar from 1 to 16 will allow you to push the brightness on an HDR title, particularly if it appears relatively dark in the default 8 position. By moving the counter to one of the lower settings, you will compromise dynamic range, but HDR Setting is both an effective and much-needed feature. Within the Digital Cinema out-of-box picture mode, settings between 3 and 7 usually produced the most satisfying images, but you will need to experiment by tailoring to each specific title.

Connections include 2 x HDMI (18Ghz/2.0 Support/HDCP 2.2), 1 x USB Type A, 1 x USB (for wireless and firmware), 1 x Mini USB (service only), 1 x LAN (RJ45), 1 x Computer (D-sub 15-pin), 1 x RS-232c and 1 x trigger out port. Because the 6050UB is predominantly designed for a dedicated AV room or theater (and therefore assumes operation with a separate sound system), there are no onboard speakers. While the matte black projector housing is comparatively large at 20.5 inches wide and 17.7 inches deep the design is bold and rugged, and feels well-built. A side panel allows for on/off control and menu manipulation, while the front view is dominated by the automated and dust-protecting lens door, as well as two intake and exhaust grilles which pass cooling air around the lamp and non-sealed light engine. The chunky black backlit remote provides intuitive placement for all the most-used buttons, including Menu, Color Mode, Lens, HDR Setting and Pattern.

The 6050UB can deliver delightful HDR images, and manages to extract oodles of texture, nuance and depth from the 4K UHD Blu-ray disc of The Shining in Digital Cinema mode (with expanded color filter). From the moment Jack Nicholson enters the lobby of the Overlook Hotel, the image pops with accurate colors and pleasing brightness. No details are lost either, as props and furniture in the background and behind the check-in desk almost offer up a three-dimensional tableau. As the tone of the film consistently darkens, table lamps create pools of light in hotel passageways while subtle shadow detail in wood paneling is easily distinguishable. Where some projectors struggle to differentiate the varying degrees of grey and blue in the forecourt of Durkin’s Auto Supply, with its central, lonely fluorescent light, the 6050UB comes into its own and produces something akin to watching a premium film print.

The 4K UHD disc of Phantom Thread likewise faithfully reproduces extraordinary accuracy to the original source, as Vicky Krieps’ candle-lit facial close-ups exude vivid detail against retiring dark backgrounds, the kind of experience you’re more likely to find at your local theater. Meanwhile, a London restaurant interior delivers enormous color fidelity juxtaposed with deep and satisfying blacks. As scenes transition from bright exteriors to dark interiors, there is some pumping of the Auto Iris in its High setting, but the improvement over Epson’s earlier iterations of the technology is substantial, and the operation significantly quieter.

Performance of SDR material in Natural mode is no less exciting, particularly when compared to former 1080p Epson models, and the 6050UB does a sterling job at 4K upscaling if you hand the duties over to the projector from your source. The interior phone switchboard room in The Changeling Blu-ray produces a high level of pinpoint-accurate detail, while Angelina Jolie’s dimly lit home can sometimes generate an almost pseudo-HDR experience, so accomplished is the contrast of this projector. There are similar moments to be enjoyed on The Searchers Blu-ray where Ethan’s (John Wayne) brother’s home interior and porch brim with color intensity and shadow distinction.

Epson manages to improve motion handling of its LCD lines on each new generation of products too. There are some testing scenes in the Blu-ray disc of Tintin, particularly during the plane crash sequence and the motorbike chase. The frenetic activity of Tintin and Captain Haddock as they descend the Bagghar hill at great pace rarely noticeably trips up the 6050UB and the result is a reassuringly smooth watch.

As far as the projector’s resolution – and returning to the issue of a twice-pixel-shifted image – unless you are sitting quite close to the screen, you will generally be unable to identify individual pixels. You will, however, probably notice slightly jagged edges to italicized fonts (as in those of the opening credits of Schindler’s List and Phantom Thread 4K BDs). In this sense, the 6050UB is at a slight disadvantage to native 4K or some single-chip DLP projectors. But any downside associated with actual resolution is more than compensated for by perceived resolution, owing to the stunning contrast, black level and engrossing HDR performance of this projector.

I described the BenQ HT3550 as a sub-$2,000 price/performance “benchmark” in my last review for HTF. As discussed in the opening section, the evaluation of US market equivalent models is not entirely fair, as the model reviewed here is the European EH-TW9400! However, if you’re considering a projector for a dedicated room for under $3k or under $4k, then the 5050UB or 6050UB certainly set the bar for those price categories. Epson has produced yet another game-changing projector in the 6050UB, one that is capable of an absolutely sumptuous image and fitted out with a raft of features, some of which you’ll be hard-pressed to find on competing models in this price bracket. The Epson 6050UB (or EH-TW9400) comes with HTF’s highest recommendation.

The Epson 6050UB is available through specialist retailers and integrators, but the white 5050UB can be purchased direct from Amazon here.

Wow! Thanks for this awesome and comprehensive review, Martin. I've had the 6050UB for awhile now and am completely satisfied. Highly recommended here as well.
Expand signature
The names Francis Sawyer, but everybody calls me "Psycho." Any of YOU guys call ME Francis, and I'll kill ya!

My Home Theater - The Evolution
Reactions: Martin Dew
You must log in or register to reply here.