Forum List What's new Dark Style Change width
Log in Register
What's new Search
Menu
Log in
Register
Navigation
Install the app
More options
Dark Style
Close Menu
Posted on October 7, 2019 by Todd Erwin
You are using an out of date browser. It may not display this or other websites correctly.
You should upgrade or use an alternative browser.
Emotional end to Woody’s journey 4.5 Stars

Woody (Tom Hanks) and the gang have settled in with new owner Bonnie (Madeline McGraw), who is about to enter kindergarten. Her parents have a strict rule that no toys can go to school, but Woody, fearing that Bonnie may feel lonely, stows away in her backpack during school orientation. Just as Woody feared, Bonnie is left to sit by herself at a table. With Woody’s unseen help, Bonnie creates a new toy to keep her company, Forky (Tony Hale), made from a discarded spork, tongue depressor, googley eyes, and some pipe cleaner. Forky doesn’t see himself at a toy, only as something to be discarded. Woody sees how much Forky means to Bonnie, and finds himself constantly trying to keep Forky out of the trash can and into Bonnie’s arms. This continues during a camping trip, with Forky escaping out a window of their moving RV and Woody jumping to rescue him. The two bond as they try to catch up with Bonnie and her parents, who also have the toy gang on board, including Buzz Lightyear (Tim Allen), Jessie (Joan Cusack), Dolly (Bonnie Hunt), Trixie (Kristen Schaal), Rex (Wallace Shawn), Hamm (John Ratzenberger), and Slinky Dog (Blake Clark). On the way, Woody spots what he thinks is Bo Peep’s lamp in the window of an antique store. Woody and Forky enter the shop to investigate, only to be met by a creepy ventriloquist doll named Benson pushing talking doll Gabby Gabby (Christina Hendricks) in a baby carriage. Gabby Gabby wants Woody’s voice box, since she was shipped from the factory nearly sixty years ago with a defective voice box, and believes that is why she was discarded and placed on the shelf of the store to collect dust. Gabby Gabby, with help from Benson and his clones, takes Forky hostage in exchange for Woody’s voice box. Woody escapes, hoping to get help from Buzz and the rest of the gang. Instead, he runs into Bo Peep (Annie Potts), who has been living on her own with her sheep and miniature doll Giggle McDimples (Ally Maki) inside a radio-controlled motorized skunk. Bo Peep, still having feelings for Woody, agrees to help him free Forky and reunite with Bonnie, but it’s not going to be easy.

The emotional ending to Toy Story 3 was a fitting and satisfying end story to the trilogy, so when Toy Story 4 was announced, I thought it was more of a money grab for Disney and Pixar after seeing how successful the TV specials Toy Story of Terror and Toy Story That Time Forgot were. Where could the franchise really go after Andy donated his toys to little Bonnie? This is Pixar, though, where story and characters always come first, and Toy Story 4 was a fun return to the adventures of the first two films while also allowing Woody to become more of a parental figure to Forky as he realizes that Bonnie, much like Andy in the previous films, has now outgrown him, too. Tony Hale is hilarious as Forky, a confused child’s creation who has trouble understanding what he now is, and his obsession with the trash can for much of the first act had me laughing out loud, as well as his odd walk. Ally Maki is just a little bundle of energy as Giggle McDimples. The real scene stealers of the film, though, are Keegan-Michael Key and Jordan Peele as stuffed carnival prizes Ducky and Bunny (respectively) and Keanu Reeves as Canadian action toy Duke Caboom. Oh, and stick around for the end credits for some hilarious (and one bizarre) additional scenes.

Disney’s Blu-ray release of Toy Story 4 is an exceptional one, presented in a 1080p AVC-encoded transfer preserving the film’s theatrical aspect ratio of 2.39:1. Colors are well-saturated, with the night-time lights of the carnival being extra vibrant. The movie was reportedly completed as a 4K digital intermediate (which could be a first for an animated film), and the additional resolution, even when downscaled at 1080p, adds a lot of detail to the image – the intricate fabric and stitching on Bonnie’s backpack, the individual fibers of Forky’s pipe cleaner arms, the imperfections in the Formica flooring of the RV. Contrast is exceptional, with deep blacks that retain incredible shadow detail and bright whites that never appear blown out.

As with most Pixar releases, Disney has included English soundtrack options for 7.1 (DTS-HD MA), 5.1 (DTS-HD HR) and 2.0 (Dolby Digital) home theater configurations, but alas, no spatial audio options (which is reserved only for 4K UHD, per Disney policy). Unfortunately, the disc defaults to the 5.1 DTS-HD HR track, so you will need to enter the setup menu to select the 7.1 DTS-HD MA track. This is yet another mix from Disney that requires a slight increase in the master volume, but once that is accomplished, the track begins to really shine. Surrounds are used for atmospherics and occasional discrete effects and dialogue. Randy Newman’s score is spread nicely across the wide front soundstage and surrounds, too. Dialogue is clear and understandable throughout.

The Special Features on Toy Story 4 are spread across two lu-ray Discs.

Feature Commentary: Director Josh Cooley and Producer Mark Nielsen, longtime friends and co-workers at Pixar, discuss the making of the film and its legacy.

Disc 2:
Let’s Ride with Ally Maki (1080p; 5:41): The voice of Giggle McDimples walks viewers through the voice recording process for an animated film.

Woody & Buzz (1080p; 3:35): Looking back at the relationship between these two iconic characters.

Anatomy of a Scene: Playground (1080p; 9:31): Breaking down the creation of the big playground scene.

Toy Box (1080p; 13:00): A look at many of the new characters introduced in the film, including Gabby Gabby & Her Gang, Forky, Duke Caboom, Ducky & Bunny and Giggle McDimples.

DVD Copy: The movie in 480p with your choice of 5.1 or 2.0 Dolby Digital audio plus the audio commentary.

Going in with low expectations, I really enjoyed Toy Story 4. The presentation on Blu-ray is about what one would expect for a Pixar movie, and a nice set of special features, too.

Thanks for your review, Todd. I can't wait to pick this up tomorrow. Does the audio commentary address the decision to alter the aspect ratio for this movie versus the 1.77:1 they used for the previous three? I was really curious about that from when I first realized it was going to be wider.

Jake Lipson said:
Thanks for your review, Todd. I can't wait to pick this up tomorrow. Does the audio commentary address the decision to alter the aspect ratio for this movie versus the 1.77:1 they used for the previous three? I was really curious about that from when I first realized it was going to be wider.
Click to expand...

To be honest, I did not have time to listen to the entire commentary, but did skim through it, and as far as I could tell, the answer is no. But 2.39:1 seems to be the prevalent aspect ratio of animated films these days.

Right, but this is the first time Pixar made a sequel where they deviated from the ratio used for the previous films. I just would have been interested to hear a discussion of why the decision was made. Oh well.

Todd, thanks for the review. Didn't you get a UHD version to review?

Scott Merryfield said:
Todd, thanks for the review. Didn't you get a UHD version to review?
Click to expand...

Unfortunately, no. Typically at this time of year, replication facilities are maxed out beyond capacity, making review copies more scarce and often limiting the number of copies retail stores receive. Remember the continuous delays with 2001 last year?
D

Jake Lipson said:
Right, but this is the first time Pixar made a sequel where they deviated from the ratio used for the previous films. I just would have been interested to hear a discussion of why the decision was made. Oh well.
Click to expand...

This is a road picture, so they wanted to go for a more "epic" look.
You must log in or register to reply here. 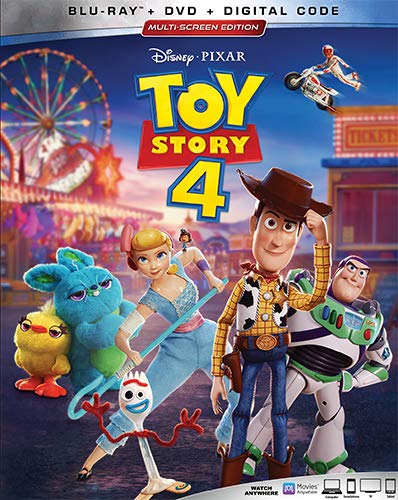