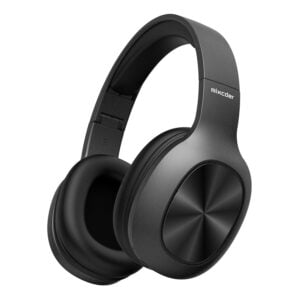 Back in July of this year, I was sent a press release that announced the availability of Mixcder HD901 Bluetooth Headphones. The headline on the release stated that they were “the lightest, most comfortable, lowest cost foldable Hi-Fi wireless headphones on the market.” That is a pretty bold and lofty claim, so when I was offered the chance to review these headphones, I jumped at the opportunity.

When I’m not maintaining computers at a local accounting office or reviewing movies here at Home Theater Forum, I’m usually outside maintaining the yards at the two properties my wife and I own. To keep myself from getting bored while weeding, I like to listen to music or podcasts on a pair of headphones so as not to disturb the neighbors. I can’t wear traditional earbuds, as they often just fall out of my ears with any sort of head movement, and over the ear headphones are often heavy and bulky, and again usually fall off my head when leaning over. When cleaning around the house, I usually wear my Plantronics Backbeat Pro Noise Cancelling Wireless headphones, which sound great but would hate for them to fall into the dirt or even worse, a trash can full of leaves and other debris. I do have a pair of Bluetooth earbuds that have hooks to help keep them on my ears, but they still pop out of my ear canal. So, when the Mixcder HD901’s arrived, I was eager to give them a try.

Inside the box, I found the headphones folded up rather compactly. Picking them up, I found them to be true to at least part of their claim – these certainly were lightweight for a pair of wireless headphones. I also found a short 2 foot micro-USB to USB charging cable, a 4 foot male to male 3.5mm headphone cable, and a small instruction manual. Sadly, a USB to AC adapter was not included. I then proceeded to charge the headphones overnight. 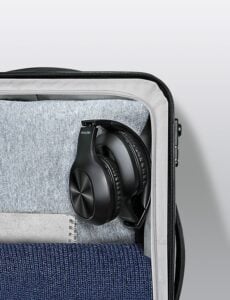 The next morning, after being fully charged, I followed the instructions to pair the headphones to my smart phone, which were a bit difficult to follow – Press the power button for 2 seconds. And please wait for 10 seconds. Was I supposed to continue holding the power button? Apparently not, since I released the power  button when the female voice said “Power On,” and then within 10 seconds after that, she said “Pairing.” I selected “Mixcder HD901” from the list of devices, and was then greeted with the prompt “Connected.” I then placed the headphones over my ears and adjusted them accordingly. The fit was snug but not uncomfortable. I then proceeded to play some of my favorite music tracks. Let’s face it, these are basically $20 Bluetooth headphones, so my expectations were not very high to begin with. The sound was muddy, with an emphasis on low frequencies and almost no highs. I then began playing with the graphic equalizer within the music player app on my phone, boosting the high and mid-range frequencies, and things improved to a more acceptable level for casual background listening, but nothing I would call outstanding. Now to do some gardening… I listened to my playlists while weeding, raking, shoveling, etc. for close to four hours and these headphones never fell off. The earcups, though, caused my ears and surrounding area on my head to sweat, so when I finally removed them at the end of my gardening session, I needed to wipe the earcups with a cloth until they were dry. These are not active noise canceling by any means, either through listening or speaking, as these can be used to answer phone calls. Phone call quality was average, with the person on the other end able to understand me, but they said that I sounded rather distant.

The headphones do support Bluetooth v4.2, and range is fairly decent (although nowhere near the coverage range of my Plantonics). One thing I found rather nice was the inclusion of a slot to accept a TF card (what we Americans refer to as a microSD card) loaded with mp3 files, but getting the headphones to switch from Bluetooth to TF card by pressing the power button twice (as indicated in the user manual) rarely worked. I found that by removing the card and then re-inserting it forced the headphones to switch over to the storage device. The card is spring loaded, so place your other hand over the slot or the tiny card will go flying across the room, possibly to be lost forever. The other downside to using a TF card is that the headphones do not have any built-in Eq to compensate for the clipped high frequencies. I do like the option of using a card, though, especially for a long trip and you don’t want to have the headphones connected to your smart phone, either wirelessly or wired (there is a 3.5mm input on the headphones, as well).

Does the Mixcder HD90 headphones live up to their hype? Yes and no. Given the $20 price tag, these are not bad for working in the yard or going for walks, provided your music app has DSP or Eq settings to compensate for the poor sound quality. Would I use these for everyday listening? Not likely. At $20, I see these as a cheap alternative to my more expensive and better quality headphones without having to worry about them getting damaged or destroyed while working in the yard, but would not use them for any serious listening.