Forum List What's new Dark Style Change width
Log in Register
What's new Search
Menu
Log in
Register
Navigation
Install the app
More options
Dark Style
Close Menu
Posted on April 28, 2019 by t1g3r5fan
You are using an out of date browser. It may not display this or other websites correctly.
You should upgrade or use an alternative browser.
Initial "Road to..." movie debuts on Blu-ray 4 Stars

In 1940, Paramount Pictures decided to team up two of their top stars – Bing Crosby and Bob Hope – with one of their top actresses – Dorothy Lamour – for a musical comedy adventure; the result was Road to Singapore, the genesis for the long running series combining rapid fire gags and musical numbers in equal doses. Kino – through their Studio Classics line – has given the movie its Blu-ray debut here.

Friends and shipmates Josh Mallon (Bing Crosby) and Ace Lannigan (Bob Hope) just wanted to get away from it all; after their pledge to never get involved with women again backfires – after a drunken brawl at Josh’s presumptive engagement party – the two hightail it to Singapore, only to get stuck on the island of Kaigoon when their money runs out. However, their luck changes when they rescue local native Mima (Dorothy Lamour) from an abusive performer (Anthony Quinn) and Mima quickly takes a shine to both of them. However, their old life in America – in the form of Josh’s magnate father (Charles Coburn) and his fiancée (Judith Barrett) – comes to Kaigoon and will test the newly formed bond between the trio in comic fashion.

Road to Singapore, the first in the long running franchise, is a fun and entertaining romp that mixes slapstick and music very well, but it almost turned out very differently. Paramount had originally planned to have Fred MacMurray and Jack Oakie in the leads when the production carried the title Road to Mandalay; when that didn’t pan out, they tried having George Burns and Gracie Allen take the reins with a second male lead as Beach of Dreams (that didn’t work either because, according to George, “Gracie thought the whole thing was silly”). Fortunately, Bing Crosby and Bob Hope stepped in and the movie began a long running on-screen combo between the two that works flawlessly; however, that shouldn’t be too much of a surprise since the two had teamed up together previously on the vaudeville circuit years before the filming commenced. The addition of Dorothy Lamour – the studio’s “Sarong Queen” – brought the combination to a trio and the film really plays off of each of their strengths; Dorothy gets a chance to showcase her singing talents with “The Moon and the Willow Tree” and a “Too Romantic” duet with Bing. Director Victor Schertzinger – who was also an accomplished composer and contributed the songs “Captain Custard” and the aforementioned “The Moon and the Willow Tree” for this film – deftly mixes the music and comic to a great degree (much of the running gags in the series, such as the ‘patty-cake’ routine, got their start here), setting the tone for the next six films; Schertzinger would only direct one more – Road to Zanzibar – before his death from a heart attack shortly after completing The Fleet’s In (1942) at the age of 53 the year after this film’s release.

In addition to the trio of Crosby, Hope, and Lamour, the film is also populated with a series of character actors familiar to fans of classic Hollywood. Charles Coburn, as Josh’s shipping magnate father, adds on to his prolific resume and his work in comedies here playing a straight man to both Crosby and Hope; he would later win an Oscar for his work in another comedy – The More The Merrier (1943) – but this would be his only appearance in the “Road to…” series. Anthony Quinn brings the heavy as the abusive dance partner of Mima; he would also appear in Road to Morocco just two years later, again playing the heavy. Jerry Colonna, a frequent sidekick of Bob Hope on the radio, plays a shipping company employee who’s a victim of a bad spot remover scheme cooked up by Ace and Josh. A few more familiar faces that turn up here are Monte Blue as a high priest, Miles Mander, Cyril Ring as a ship officer, Robert Emmett O’Connor as a native immigration officer, and in a rare on-screen appearance, Arthur Q. Bryan – the voice of Elmer Fudd himself – as a bartender.

The original 1:37:1 aspect ratio is intact for this HD transfer of the movie. Film grain is both sturdy and organic with fine details rendered faithfully; grayscale is strong with very few instances of age related problems like dirt, dust, scratches, or speckling. Overall, this transfer likely represents the best the movie has ever looked on home video.

The original mono sundtrack is presented on a DTS-HD Master Audio track for this release. Dialogue and sound effects are both strong and clear with great fidelity given to Victor Young’s background score and the songs accompanying the soundtrack; there’s hardly an instance of age related issues (distortion, crackling, popping, etc.), making this likely the best the movie has ever sounded on home video.

Bob Hope and the Road to Success (14:13) – This 2001 featurette goes over the early years of Bob Hope’s career, leading up to the “Road to…” series. Note: this featurette also appears on Kino’s release of Road to Morocco.

Entertaining the Troops (6:20) – Filmed in 2001, this brief featurette goes over Bob Hope’s dedicated service in entertaining our troops both at home and overseas.

As the genesis of the “Road to…” series, Road to Singapore is a fun-filled little romp that established one of the great comedy teams of the Golden Age of Hollywood. Kino has done a fantastic job of providing the movie with a great transfer as well as carrying over the special features from previous home video releases of the movie. An easy recommendation for upgrading if you’re a fan of the film series or of classic Hollywood comedies in general. 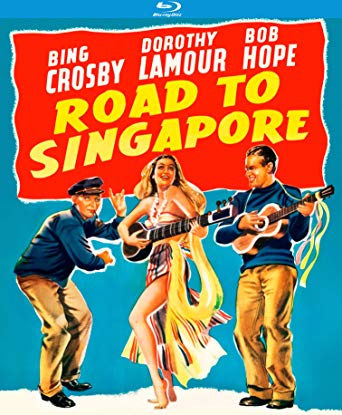