Forum List What's new Dark Style Change width
Log in Register
What's new Search
Menu
Log in
Register
Navigation
Install the app
More options
Dark Style
Close Menu
Posted on May 5, 2019 by t1g3r5fan
You are using an out of date browser. It may not display this or other websites correctly.
You should upgrade or use an alternative browser.
Classic "Road to..." movie debuts on Blu-ray 5 Stars

During the 1940’s, the “Road to…” franchise at Paramount Pictures could be counted on to provide great escapism as well as great entertainment value; not surprisingly, the success of these films helped to further establish Bing Crosby, Bob Hope and Dorothy Lamour as top draws at the box office. The third entry in the franchise, Road to Morocco, may be the greatest of all the Road films as its elements of music and slapstick are held in near perfect alignment. Kino, through their Studio Classics line, has given the film its debut on Blu-ray.

Washed up on North Africa’s shores after stowing away aboard a ship, Orville “Turkey” Jackson (Bob Hope) and Jeff Peters (Bing Crosby) manage to find a camel that takes them on the road to Morocco. And before you can say “Webster’s Dictionary”, the two find themselves in a heap of trouble in their new surroundings. Jeff sells Orville to a trader who, in turn, sells him to Princess Shalmar (Dorothy Lamour), who takes an interest in Orville and plans to marry him. That proves to be a problem, as the rogue sheik Mullay Kasim (Anthony Quinn) also has eyes for the princess, which could lead to both Jeff and Orville losing their necks!

Lampooning the exotic adventures that came before it, Road to Morocco is a highly enjoyable comedy that brought the series to its zenith. In terms of comedy, the trio continue a few gags that have spurred on the series (the “patty cake” routine for example) while breaking the fourth wall a few times for some laughs as well (the scene in the jail immediately comes to mind). From a music standpoint, the Johnny Burke-Jimmy Van Heusen songs are suitably attuned to the story, with the eponymous title song and “Moonlight Becomes You” standing out memorably; a perfect marriage between music and comedy. All of this comes to life under the direction of David Butler, taking over from Victor Schertzinger, who directed the first two movies in the franchise (and whom passed away before production began on this movie). With its rapid fire gags and memorable songs, this Road is definitely one worth traveling over and over again, and one that has become a genuine classic.

Of course, there’s no way the film would’ve worked without the genuine chemistry between Bing, Bob, and Dorothy, but there’s some more notable players here who are also worthy of praise for making the comedy work. One of them is Anthony Quinn; having already played a heavy in the series (Road to Singapore), he fills the role here and is the recipient of the “patty cake” gag that backfires. Dona Drake is noteworthy as the handmaiden who also takes a shine to Orville; she holds her own against the trio. Vladimir Sokoloff makes a noteworthy appearance as the wise man whose star reading causes confusion as to who marries who; Dan Seymour makes a brief appearance as the trader who buys Orville from Jeff. Other notables include Monte Blue as an aide of Kasim, Yvonne De Carlo as one of Princess Shalmar’s handmaidens, Richard Loo as a broadcaster in the opening montage, Brandon Hurst as another broadcaster in said montage, Nestor Paiva as a vendor, Stanley Price as a simple minded citizen in the bazaar, Kermit Maynard as an Arab horseman, Cy Kendall as the fruit stand proprietor, and Kent Rogers – Beaky Buzzard himself – voicing the male camel.

The original 1:37:1 aspect ratio is kept intact for this HD of the movie. Film grain is sturdy and organic, with fine details rendered strongly and a solid grayscale throughout; there’s very minimal instances of age related artifacts like dirt, dust, scratches, and flickering that’s noticeable. Overall, this is probably the best the movie has looked on home video.

The original mono soundtrack is presented on a DTS-HD Master Audio track for this release. Dialogue and sound effects are clear and strong and great fidelity is given to the Johnny Burke/James Van Heusen songs and Victor Young background score (Young was uncredited for that but was credited as the musical director for the film); there’s nary an instance of age related issues – distortion, crackling, popping or hissing – making this the best the movie has ever sounded on home video.

Commentary by Jack Theakston – Recorded for this release, Theakston goes over the film’s production; like the movie itself, this track is lighthearted and entertaining but also very informative.

Bob Hope and the Road to Success (14:13) – Filmed in 2001, this featurette goes over Bob Hope’s career prior to the “Road to…” series; featuring interviews with film scholar Randall Mielke, comedienne and friend Phyllis Diller, and Hope boigrapher Richard Grudens.

Command Performance 1945 (5:05) – Brief excerpts from a short film distributed to the troops showcases Bob Hope and Jerry Colonna entertaining the troops via radio.

Trailers From Hell with John Landis (2:36) – The trailer of the movie is presented with commentary by Landis, who cited the “Road to…” movies as inspiration for his own effort Spies Like Us (1985).

Bonus KLSC Trailers – Road to Singapore, Road to Zanzibar, and Road to Utopia

Road to Morocco has survived over the years as not only the best of the “Road to…” franchise, but as one of the greatest American comedies of Hollywood’s Golden Age. Kino has done full justice to the movie by providing a great transfer as well as an informative commentary track and legacy special features from previous releases of the movie on home video. An easy recommended upgrade for fans of the movie, franchise, and classic Hollywood in general.

I thought "Road To Morocco " was the second not the third 'Road" movie. Great review. I bought all the Universal/Paramount "Road" movies during the last Kino sale.

Spot on review! I just watched this gem again last night and this Kino release is the best it's ever looked on home video. A delight from start to finish with great songs as well. I would give Road to Utopia a slight edge for being the best in the series, but this is a close second for me. Highly recommended!
Last edited: May 6, 2019

Garysb said:
I thought "Road To Morocco " was the second not the third 'Road" movie. Great review. I bought all the Universal/Paramount "Road" movies during the last Kino sale.
Click to expand...

JoelA said:
Spot on review! I just watched this gem again last night and this Kino release is the best it's ever looked on home video. A delight from start to finish with great songs as well. I would give Road to Utopia a slight edge for being the best in the series, but this is a close second for me. Highly recommended.
Click to expand...

Yup, that would be my order. I understand that the camel spitting at Bob Hope was the real unplanned thing, as was Crosby's laughing & comment, & they kept it all in.

In the early sixties, the BBC was going from 405 lines to 625 lines & in the daytime were doing some test transmissions, & the program they were using was Road To Morocco, you could get it on our little 405 b/w TV, but the picture was really snowy, & I can remember my mother telling me off for watching it with a towel over the TV & me so I could see it better, "you'll ruin your eyes", but I'm 68 now, & my eyes are still okay.

JoelA said:
Spot on review! I just watched this gem again last night and this Kino release is the best it's ever looked on home video. A delight from start to finish with great songs as well. I would give Road to Utopia a slight edge for being the best in the series, but this is a close second for me. Highly recommended!
Click to expand...

Agree. Road to Utopia is my favorite also. My dad saw it in a theater in 1945 and told me that the kicker at the end got the biggest laugh he'd ever heard at the movies.

I never noticed until I rewatched them in order the past few days, just how the formula evolved after the first two movies. Other than a mention of Paramount in Road to Singapore that could easily go by unnoticed if one didn't know it was a Paramount release, there's no breaking of the fourth wall until Road to Morocco. That of course became a staple of the franchise when they started doing it with this movie.

I think Bob Hope and Bing Crosby singing "We're Off on the Road to Morocco" is the highlight of all seven movies for me. Especially the part where they're singing about being under contract with Paramount for the next five years.

Hard to pick one great moment when this one alone has so many highlights, like when Bing starts talking about how the situation is going to be getting desperate soon as they float on their raft, and he breaks it to Bob that he might have to eat him in a week or so.
Last edited: May 8, 2019
You must log in or register to reply here. 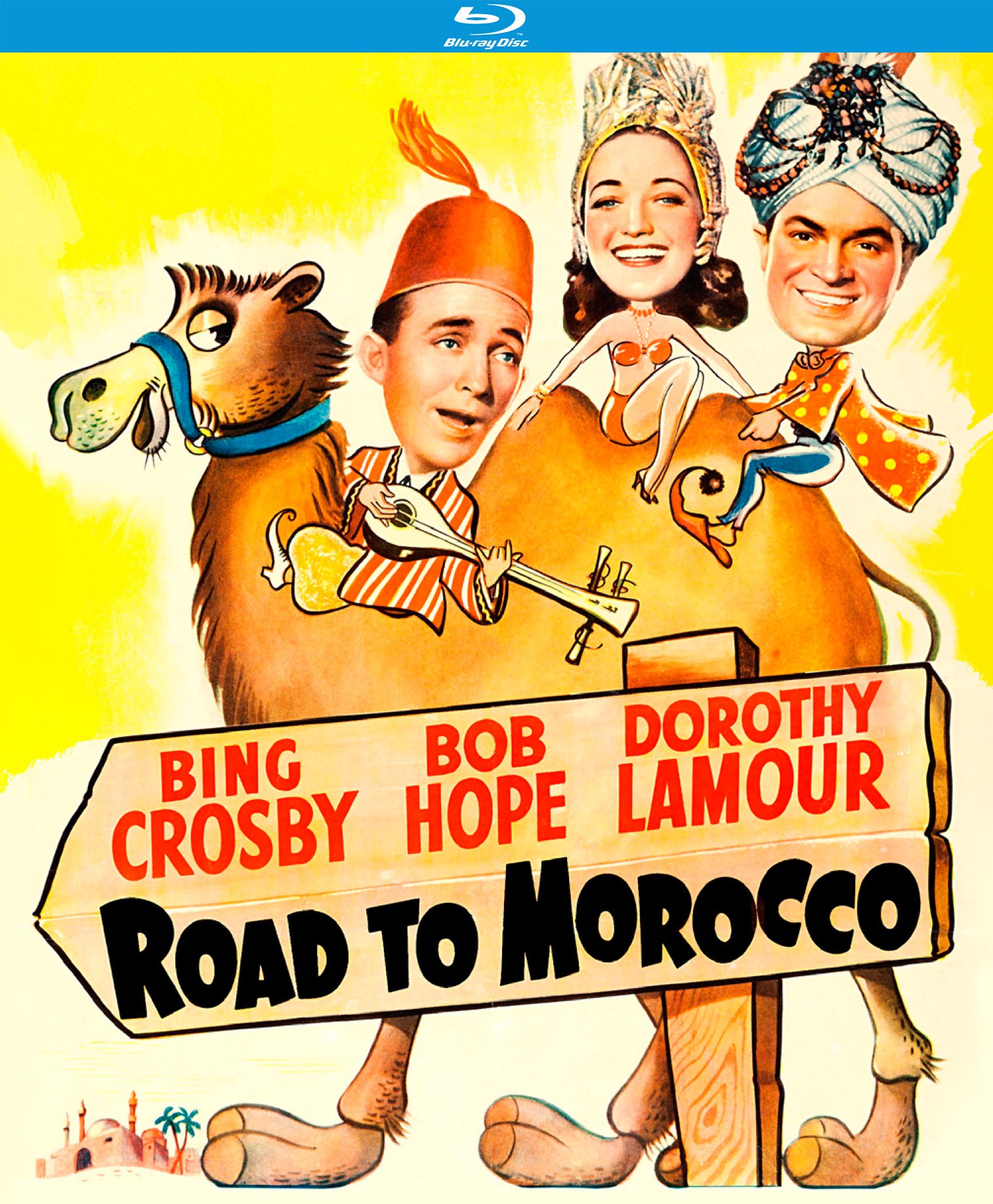