Forum List What's new Dark Style Change width
Log in Register
What's new Search
Menu
Log in
Register
Navigation
Install the app
More options
Dark Style
Close Menu
Posted on March 1, 2019 by Matt Hough
You are using an out of date browser. It may not display this or other websites correctly.
You should upgrade or use an alternative browser.
Reasonably entertaining second Road movie. 3.5 Stars

Road to Zanzibar is a reasonably entertaining follow-up to the first great Road success Road to Singapore featuring ace comedy work from Bing Crosby and Bob Hope and the lovely looks and voice of co-star Dorothy Lamour.

The seven Road films which starred Bing Crosby and Bob Hope were cinematic cotton candy: light, fluffy, and sweetly inconsequential entertainments with songs, a faraway locale, and an alluring co-star (usually Dorothy Lamour). They were big hits in their day because the filmmakers weren’t afraid to play with the audience, presenting them with the same basic formula over and over and yet oftentimes letting them in on the jokes (which got repeated with some sly variations from movie to movie). And they play well nowadays, too, because no one is taking themselves too seriously. There aren’t big emotions at play, they are too smart to wear out their welcome with lengthy running times, and when they’re over, the audience finds itself not having taxed their brains too much and just enjoying a simple bit of music and mirth. Road to Zanzibar was the second in the Road series, a routine follow-up to the original picture Road to Singapore with the movie slightly zanier than the previous one but with the fellows basically playing the same characters from the first one, just with different names.

After burning down the South African carnival where they’re trying to save money to get back home, on-the-lamb con men Chuck Reardon (Bing Crosby) and Hubert “Fearless” Frazier (Bob Hope) get tangled up with a couple of attractive girls Julia (Una Merkel) and Donna  (Dorothy Lamour) who, unknown to them, are conning them into taking part in a safari so Donna can rendezvous with a man who is heir to a tea dynasty. During the course of their jungle adventure, they face many perils to their safety while both boys fall for the alluring Donna.

The screenplay by Frank Butler and Don Hartman set the boys up in familiar roles: second class performers trying to earn a buck from one outrageous scheme or other with Bing Crosby the instigator and Bob Hope the stooge. There’s some pointless subplot foolishness involving a phony diamond mine sold to the boys by batty tycoon Charles Kimble (Eric Blore), but that entire plot set-up is quickly dispensed with as the story winds in another direction entirely with the introduction to the two con women they become entangled with. During the course of their adventures, the boys face jungle snakes, a pair of leopards, a gorilla (which Hope must face in a wrestling showdown), and cannibals, none of the sequences tied together especially well but serviceable for comedic purposes. The real fun comes with the banter between Hope and Crosby, always a delight as they rattle off barbs aimed at one another seemingly ad-lib and with the tendency to take the audience they know is present into their confidence (this film begins the in-gag references that they’re in a movie, this time in reference to their patty-cake gag). We get some wonderful music, too, courtesy of Jimmy Van Heusen and Johnny Burke. Bing starts us off with “You Lucky People” even before the main titles are concluded, but the real gems are the two solos for the singing stars. Bing gets “It’s Always You” warbled to Lamour while Dorothy croons “You’re Dangerous” to Bob, he thinks as a profession of love but for her merely a tune-up for the real thing for the millionaire she’s chasing. The one dud is the film’s rather lackluster title song trundling off as they tramp through the jungle. It can’t compare to the jaunty title song of their next romp Road to Morocco.

Bob and Bing bring to the movie that effortless camaraderie that they shared their entire professional lives and honed from years of appearing on each other’s radio shows and in shared film appearances. Dorothy Lamour and Una Merkel don’t appear until midway through the movie. Dorothy makes her moments count (in addition to her melting vocals, we get an appealing dip in a jungle lagoon and when the leopards run off with her clothes, a skimpy jungle greenery outfit), but Una Merkel’s comedy timing is certainly wasted in a story basically built for three. Eric Blore’s British blarney is over much too quickly, and he disappears from the movie. So, too, is Douglass Dumbrille’s usual villainy lacking, rather slack as a slave-trading charlatan. Iris Adrian has just a moment or two in the spotlight early on, and then she, too, performs a vanishing act.

The movie is presented in its theatrical 1.37:1 aspect ratio (with windowboxed opening credits) in 1080p resolution using the AVC codec. The film’s grain structure is strictly maintained throughout, but it’s quite sharp and clear (clear enough to see Bob Hope’s stunt double do most of that wrestling match with the gorilla) apart from a couple of scenes which feature some micro-scratches and one of two thin white scratches in other moments of the movie. Otherwise the image is free of dirt and dust specks and other annoying artifacts. The movie has been divided into 8 chapters.

The soundtrack is presented as DTS-HD Master Audio 2.0 mono reflecting the original single channel sound of the original movie presentation. Dialogue is always easily discernible and has been mixed well with the music and sound effects with reasonable amounts of bass and a nice balance overall. There are no age-related problems with hiss, crackle, flutter, or pops.

Bob Hope and the Road to Success (14:13, SD): a brief rundown of Hope’s early career that led him to the Road movies. Among those offering information and opinions are Phyllis Diller and Bob Hope historian Richard Grudens.

Additional Theatrical Trailers: trailers for Road to Singapore, Road to Morocco, and Road to Utopia.

Road to Zanzibar is a reasonably entertaining follow-up to the first great Road success Road to Singapore featuring ace comedy work from Bing Crosby and Bob Hope and the lovely looks and voice of co-star Dorothy Lamour. The trio would really hit their stride with the next film in the series Road to Morocco, but Road to Zanzibar has its own pleasures and treasures.

I think this is the last one I saw, maybe about a year ago (I still have my UK DVD box set), great stuff (& 4 out of 5 is a great picture score), I just let it wash over me & I'm a kid once more, watching our tiny b/w TV in the early sixties. As you say, the movies got more zany & knowing as they went on, with Utopia being the tops for me. All these great forties films being released on Blu-ray
Last edited: Mar 2, 2019

I think Utopia is the best one, too. I'm slated to review it, but the disc hasn't arrived yet. Stay tuned!

Toss up between Utopia and Morocco for me.

Zanzibar has the full-on patty-cake.

Can’t wait to sit down with these and relax with a nice drink (in a dirty glass)
You must log in or register to reply here. 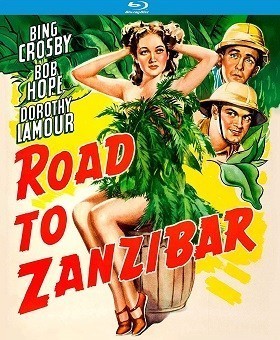