Forum List What's new Dark Style Change width
Log in Register
What's new Search
Menu
Log in
Register
Navigation
Install the app
More options
Dark Style
Close Menu
Posted on April 27, 2019 by Sam Posten
You are using an out of date browser. It may not display this or other websites correctly.
You should upgrade or use an alternative browser.
Wouldst thou like to live deliciously? 3.5 Stars

Puritan settler William (Ralph Ineson) and his wife Katherine (Kate Dickie) are banished from their colony and set out with their family to build a farm in the middle of a forest clearing. After building a home their luck starts fading, as their corn will not grow, and William cannot hunt. All he seems to be good at is splitting wood. Eldest Daughter Thomasin (Anya Taylor-Joy) is tasked with watching newborn Samuel, and he disappears mere inches from her face while they play peekaboo. William convinces himself that a wolf took Samuel but the children all believe it to be the work of a witch in the woods, and we see that she (Bathsheba Garnett / Sarah Stephens) has indeed taken Samuel and rendered him down for a poultice that can help her fly.

As Katherine descends into despair, William takes son Caleb (Harvey Scrimshaw) hunting, where they happen upon a hare. William is wounded during the attempted shot, and Caleb slips out to try to hunt to provide in his stead the next day. Thomasin worms her way onto the journey and they encounter the hare again. When Thomasin’s horse is spooked she and Caleb are split, and he winds up in the witche’s hovel while she runs home without their horse… 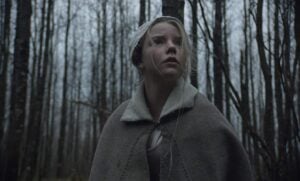 Presented with exacting detail on the home life of the Puritan settlers, The Witch acts as a multi-tiered folk-lore horror tale. Depending on your perspective you might believe that Thomasin is the witch all along, that she is a victim, she is a feminist hero, or even that the bewitching is all psychological or even fungus/bacteria induced. Isolation, burgeoning sexuality, religious dogma and just the pure toughness of frontier living all contribute to the mystery and tragedy. And The Witch is very happy for you to make up your own mind about that. You can take the very literal interpretation that Thomasin gives in to the temptations of Black Philip the goat or the spirit of Satan and that she too flies with a coven at the end. You can believe she falls into madness as her family falls apart. Or that she brings all of this on her own, due to innate evil, as a counter point to the Puritan believe of original sin.

Audiences were split on this uncertainty but Salem and witch historians loved the verisimilitude / fantasy dichotomy. I totally got what director Rob Eggers was going for and I walked out of my original theatrical viewing with a huge smile, in the middle of a bunch of somewhat confused other theater goers. My appreciation has only grown on multiple viewings and additional research. I’ll post some of those links in the review discussion thread. 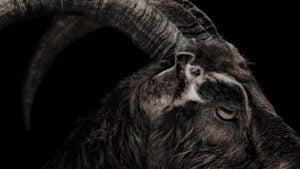 Per our own Robert A. Harris, The Witch on UHD is “a perfect example of the proliferation of 4k releases, based upon a 2k source. The 4k of The Witch comes off a bit heavier, with HDR, but with no additional discernible resolution over its HD counterpart. In other words, another typical 4k from 2k release.”

Personally I find the addition of HDR more of a draw than pure resolution. There is no getting around it tho, The Witch is a darkly shot film and the addition of an HDR pass makes things pop when candle light is shown and important details are revealed in the shadows.

There are a couple instances of what looks like haloing in establishing landscape shots, and Eggers calls those out as the scenes he hates most and that the issues are in the original capture. For such a dark film grain is well contained and detail is as well presented as you’d expect from a 2k source. 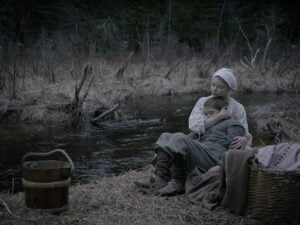 There’s not a ton of sub frequency action nor too much activity in the rears, but the orchestral soundtrack does filter past the front sound stage. Creepy voice cues and chants do occasionally pop up all around, but this isn’t a surround sound demo disk by any means. 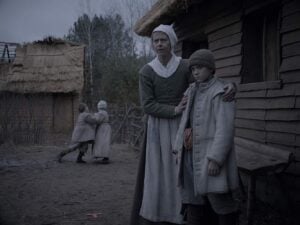 I’m led to believe that all extras are from the previous Bluray except for a new director’s commentary with Robert Eggers. I listened to that in its entirety while writing this review and found it illuminating.

Additionally we have a design notebook gallery, a 45 minute capture from a fan event that took place in Salem, Massachusetts right at the time of premiere, and a brief making of featurette called “The Witch: a Primal Folklore”. All three are interesting and worthy of your time. 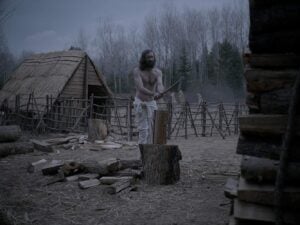 Overall I am a fan of The Witch but completely understand that the uncertainty about its messages and meanings are a tough bite to chew for many viewers. It’s somewhat disappointing that there isn’t a whole lot of impetus to upgrade if you already own the Bluray edition of this film but for those who have yet to see it there is no better time to experience it. If you do find yourself a fan of the film or just want to know more about the secrets behind it, look for my list of interesting articles to follow! 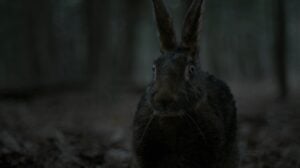 Nice, review, Sam. So, I am a fan of this picture. I like my horror films to be long on atmosphere and this fits the bill. It certainly comes out of the tradition of Brit folk horror pictures like Witchfinder General, The Blood on Satan's Claw, and Mark of the Devil. I don't think these sort of period horror films get made much anymore and The Witch is an excellent one that I am quite happy to have. It is strange and leaves the audience to ponder the goings on, another thing I admit I like in a film, so it will linger with some people I think. It's meant to creep you out not jump scare you out of your chair. The director did, as Sam points out, do his research on this one and that pays off in spades adding to the mood of the picture.

I would also like to throw out a recommendation here as I stumbled upon another film just the other day called Hagazussa and if you were looking for something to watch that had the great period setting and mood of The Witch...well...this one is for you. It is beautifully shot and quite creepy and delves authentically into the same kind of subject matter. Thanks @Reggie W , I will look for that one.

Caleb's seduction:
https://soundcloud.com/milanrecords/mark-korven-calebs-seduction-from-the-witch-ost
You must log in or register to reply here. 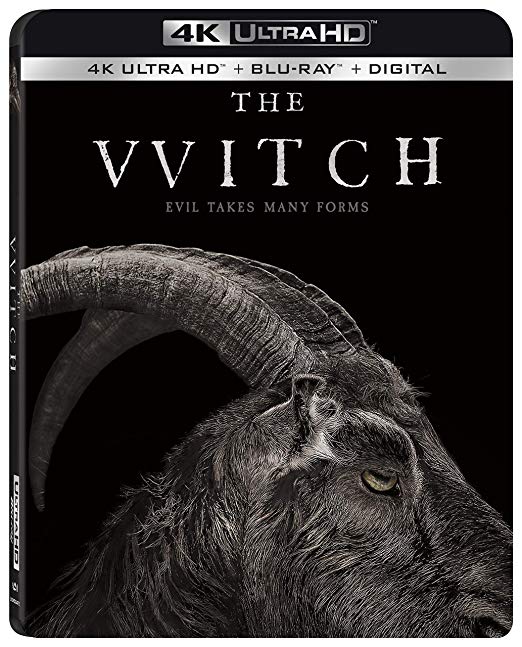