Forum List What's new Dark Style Change width
Log in Register
What's new Search
Menu
Log in
Register
Navigation
Install the app
More options
Dark Style
Close Menu
Posted on November 11, 2017 by Matt Hough
You are using an out of date browser. It may not display this or other websites correctly.
You should upgrade or use an alternative browser.
Family friendly holiday comedy is mediocre. 2.5 Stars

Attempting to craft a holiday tale that could rank with The Grinch, Rudolph the Red-Nosed Reindeer, and A Charlie Brown Christmas as Christmas perennials, Mariah Carey’s All I Want for Christmas Is You presents a family-style story of holiday cheer that’s heavy on the music, decorations, and ambiance of the season but missing that one key element – charm – that all of those other-named holiday specials possess in spades.

Attempting to craft a holiday tale that could rank with The Grinch, Rudolph the Red-Nosed Reindeer, and A Charlie Brown Christmas as Christmas perennials, Mariah Carey’s All I Want for Christmas Is You presents a family-style story of holiday cheer that’s heavy on the music, decorations, and ambiance of the season but missing that one key element – charm – that all of those other-named holiday specials possess in spades. It’s bright and colorful, and there’s enough slapstick mayhem to please the younger members of the family, but its overall effect is not a lasting one, and for many, one viewing of this ninety-minute special will be more than enough.

Young Mariah (Breanna Yde) has had the same Christmas wish for quite a few years: a puppy of her very own, but her father’s (Phil Morris) allergy to dog fur and her mother’s (Lacey Chabert) penchant for neatness has never resulted in that particular wish coming true. This year, Mariah’s school chums Vicky (Laya DeLeon Hayes) and Grace (Montse Hernandez) invite Mariah to participate in a holiday fashion show with girls and their dogs participating, and luckily, Mariah’s dad brings home her uncle’s dog Jack to spend the season with them while the uncle is out of town with the promise that if Mariah proves to be responsible and conscientious about tending to the pooch, she will get her own dog for Christmas. But Jack proves to be more than a handful, failing to mind the simplest commands and with a definite mind of his own in terms of chaos and destruction. As the puppy manages to make a mess of Mariah’s life at school, at her extra-curricular activities, and at home, she sees her chances of getting her own dog rapidly vanishing.

Mariah Carey serves as the narrator of the tale based on her best-selling title song and the 2015 children’s book All I Want for Christmas Is You with a teleplay provided by Temple Mathews. In addition to the numerous examples of Jack’s rambunctious and unpredictable behavior that ruins Mariah’s Christmas concert, the school toy drive, and the fashion show (along with a frenzied sequence where two squirrels invade the house and along with Jack cause a terrific mess), the story also works in a running gag with Mariah’s Grandpa Bill (Henry Winkler) playing a series of practical jokes on the neighbors the Ingersols who have the most elaborate yard and house holiday decorations that are perfect targets for the mischievous Bill. But writer Mathews has made Mariah a little too perfect for charm. She’s offered the chance to earn the right to a puppy if she’s responsible, but there isn’t anything about her behavior that isn’t responsible even before Jack invades their home: humble, uber-polite, and conscientious of others’ feelings even when they aren’t particularly nice to her (case in point, her siblings Brett and Beth – Isaac Ryan Brown and Bria D. Singleton – who find Mariah a goody two-shoes and sometimes show her typical sibling disdain). In addition to the familiar title tune which gets both ballad and upbeat renditions near film’s end, there are also three Mariah Carey solos to accompany on-screen sequences: “Christmas Time Is in the Air” as Mariah fantasizes about the lovely little white stray that she’s promised as a reward for a job well done with Jack, “Li’l Snowman” to accompany a montage of Jack’s mischievous behavior, and “Miss You at Christmas Time” when Mariah and the town go searching for Jack who runs away when he’s finally scolded for being bad.

Breanna Yde does a fine job as the younger Mariah cheerily facing the mounting disasters that chip away at her Christmas hopes until she finally lets her disappointment be expressed, and she sings her parts of “Deck the Halls” and the title song nicely. Henry Winkler has a devilish good time as the impish prankster Grandpa Bill, and Connie Jackson is warm and lovable as Grandma Lucy, far more understanding of Mariah’s feelings and yearnings than her mother. Isaac Ryan Brown makes a believably absent-minded younger brother Brett who constantly leaves the backdoor open allowing Jack to create havoc all around the neighborhood.

The made-for-home video film is framed at 1.78:1 and offered in 1080p resolution using the AVC codec. Despite the fact that this CG animation is TV-quality rather than feature film-quality work (young Mariah never has a stray hair out of place since individual hairs aren’t animated), the details which are present in the animation are very noticeable. Colors are bright and festive in accordance with the seasonal representation. Contrast has been consistently applied for a first-rate picture. The movie has been divided into 20 chapters.

The DTS-HD Master Audio 5.1 sound mix does manage to have the songs and musical background score threaded through the fronts and rears, but the ambiance of a town at holiday time is pretty much missing in the sound design. The dialogue has been nicely recorded and mostly appears in the center channel with one very obvious bit of directional placement at a certain point in the movie.

A Wish Come True (4:43, HD): Mariah Carey and the actress who plays her younger incarnation Breanna Yde each talk about what the project means to them and how holiday time is their favorite time of year.

Fans of Mariah Carey or those looking for a new Christmas special to add to their holiday collections may find Mariah Carey’s All I Want for Christmas Is You to be worth owning (it has certainly been priced to sell). Though it pales in comparison to some of the real holiday gems that are particular Christmas favorites, there’s nothing about this project that isn’t family friendly (even the dog’s piddling and pooping at inopportune moments, though they’re certainly discussed, happen off camera). 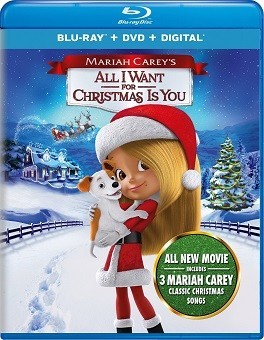