Universal City, California, March 12, 2021 – The first-ever Academy Award® winner for Best Animated Feature, SHREK, celebrates its 20th anniversary this spring. SHREK is a hilarious adventure comedy that stars the voice talents of Mike Myers (AUSTIN POWERS franchise), Eddie Murphy (THE NUTTY PROFESSOR), Cameron Diaz (CHARLIE’S ANGELS) and John Lithgow (“THE CROWN”). The incredibly original and unique blockbuster film that launched three sequels, a spin-off, TV series, holiday specials, theme park attraction and more has stayed a fan favorite and a must own for all ages! Universal Pictures Home Entertainment celebrates with SHREK 20TH ANNIVERSARY EDITION available on 4K Ultra HD for the first time ever on May 11, 2021 as well as Blu-ray™ and DVD. Adventure into over four hours bonus material including a bonus disc that comes with five episodes from “The Adventures of Puss in Boots” television series and ten shorts including Scared Shrekless, The Pig Who Cried Werewolf, The Ghost of Lord Farquaad and more!

You've never met a hero quite like SHREK. The endearing ogre sparked a motion-picture phenomenon and captured the world's imagination with…the Greatest Fairy Tale Never Told! Critics have called SHREK "not just a brilliant animated feature, but a superb film on any level" (Larry King, USA Today). Relive every moment of Shrek's (Mike Myers) daring quest to rescue the feisty Princess Fiona (Cameron Diaz) with the help of his loveable loud-mouthed Donkey (Eddie Murphy) and win back the deed to his beloved swamp from scheming Lord Farquaad (John Lithgow). Enchantingly irreverent and "monstrously clever" (Leah Rozen, People Magazine), SHREK is an ogre-sized adventure you'll want to see again and again!

DVD offers the flexibility and convenience of playing movies in more places, both at home and away.

First of all...Shrek is twenty years old? Twenty? I mean, the math works out so I know they're right to label this as a 20th Anniversary Edition. But good grief does that make me feel old.

Secondly: there is nothing actually new about that bonus disc. I know because I own it already. It was released in the Shrek Ultimate Collection box set that Universal put out in October 2019 after acquiring the DreamWorks Animation catalog titles from Fox. As far as I know, this release will represent the first time that disc has been available outside of the box set. But those shorts match what is on the bonus disc in the box set. So if you have the box set, don't expect anything new supplementally speaking.

For reference, here is the Amazon link to the existing Blu-ray box set. If @Ronald Epstein or another moderator would like to HTF-ify this link, feel free to edit this post to do so. I would do it myself but I don't know how to do your referral links.

So it appears that the only upgrade here is the 4K feature presentation. Which of course will be enough for fans who are 4K equipped.

Because I am not 4K equipped, I am good with the version that I have. But this is certainly a big title for 4K people and it is nice to see it getting released. That being said, I am a bit surprised that they are releasing this exclusively by itself rather than also offering the sequels and spinoff on 4K at the same time in an upgraded version of the box set. Although all of the films aren't loved to the same degree, I bet there would be some interest in a box set.

Incidentally, the umpteenth Blu-ray reissue which is coming the same day actually has better artwork then the plain 4K artwork. 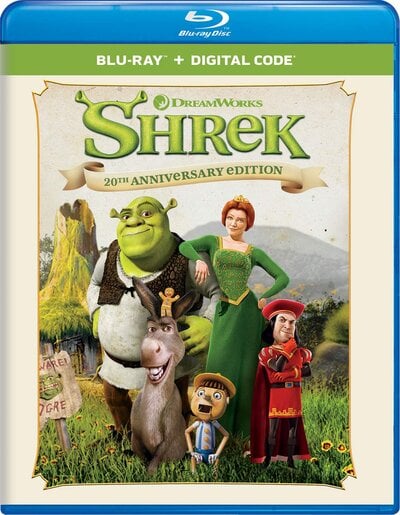 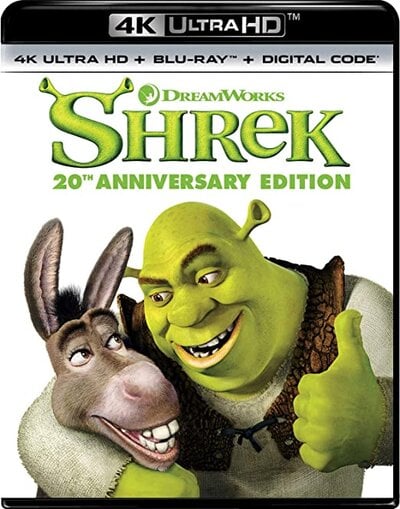 Maybe this is because it is the vintage artwork I remember having ages ago, but if you ask me, the best cover artwork this movie ever had is still from the original DVD: 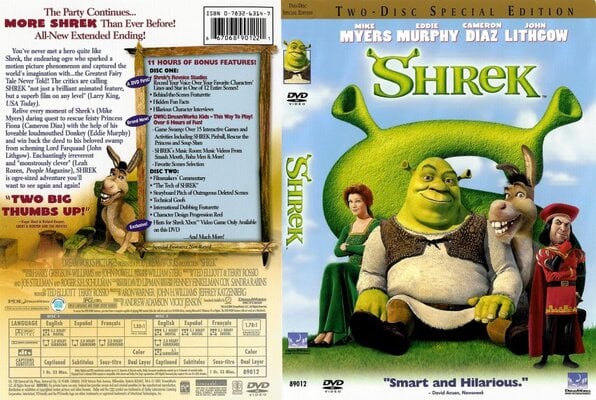 20 years and nothing worthwhile in terms of new features I see. Where's a 20th reunion retrospective or cast and crew reunion over Zoom call?

To be fair, the pandemic might have made it more challenging than usual to produce new features. But I don't think Universal has much interest in that anyway.

I bought Puss in Boots back when it was first released on Blu-ray from Paramount in 2012, but I never got around to buying any of the Shrek movies proper until last year when the Ultimate Collection I linked in my above post was on sale at a steep discount from Amazon. With that sale, it was cheaper to buy Puss in Boots again as part of the box set than it was to buy the other films individually. I checked my original Paramount disc against the reissue from Universal to see if there was any difference in the extras, and they didn't even update the dated trailers from the start of the disc, let alone add or drop supplements. So I was able to give away the older Puss in Boots disc to a friend whose child is just about the age to start watching movies, which is a good result.

Last month, when I bought the Blu-ray 2-pack of The Croods and its recent sequel A New Age, I was stunned to see that the Fox logo was still on the front of the first disc and movie. The Croods was originally released back when Dreamworks Animation had a distribution deal with Fox before being acquired by Universal, and yet Universal didn't even care enough to wipe a rival studio's branding off of a film that they now own. Technically, the continued use of the Fox logo on newly released discs of Dreamworks Animation titles is probably a violation of Disney's copyrights since they now own Fox. If Universal isn't even interested in changing out their logo for that of a competitor, I doubt they care about new supplements for these titles either. While I agree that new supplements would be nice, especially on a film of this size, I can't say I really blame them too much either with the precipitous decline of physical media sales in the last few years. At least Shrek has had a good slate of material previously released and they aren't dropping anything from the Blu-ray.

If I were into 4K, I would be more annoyed by the lack of the sequels than the lack of new supplements.

Does anyone know the resolution at which this movie was rendered?

Neil S. Bulk said:
Does anyone know the resolution at which this movie was rendered?
Click to expand...

Toy Story 4 is the first animated film to be rendered in native 4K. So while I don't have a specific answer to your question, Shrek has to be an upscaling.
Last edited: Mar 13, 2021

For those who are comfortable going to theaters right now, Universal and Fathom Events have scheduled 20th anniversary screenings of Shrek for next month.

Shrek the hilarious and irreverent Academy Award®-winning animated classic is coming back to select movie theaters for its 20th anniversary.

Other than the Gibli canon that they used to rotate every year, I think this is the first time I can remember that Fathom has booked an anniversary screening of something where I remember the original release.

I would probably go to this in a normal circumstance, but under COVID I will stick with my disc copy at home.
Last edited: Mar 17, 2021
You must log in or register to reply here.