An action-filled espionage thriller with a formidable woman as the central agent, Atomic Blonde offers bountiful surprises and crackerjack excitement in equal measure even if the plot doesn’t always ring totally true.

The title character in David Leitch’s Atomic Blonde makes James Bond look like a total wimp: an alluring, take-no-prisoners secret agent for MI6 with lethal fighting skills and a never-say-die attitude that helps her fight through the bruises, bullets, and blood and come out a winner. The film offers a clever and complex espionage story set during the last days of the Berlin Wall in 1989, and only the most cunning minds will be able to guess where the movie goes from one scene to the next.

MI6 agent James Gasciogne (Sam Hargrave) is in possession of a list of secret agent identities on all sides of the Cold War and is killed for it by vicious KGB assassin Yuri Bakhtin (Jóhannes Jóhannesson). The list, however, has vanished. MI6 agent Lorraine Broughton (Charlize Theron) is tasked to go to tumultuous Berlin amid the protests and rioting of November 1989 and find the list with the assistance of another MI6 operative based there, David Percival (James McAvoy) who was not only a friend of Gasciogne’s but also is protecting an informant named Spyglass (Eddie Marsan) who not only provided the original list hidden inside a watch but also has memorized the list himself making him a walking asset who must be protected and gotten out of Berlin. From the moment she arrives in Berlin, however, Lorraine’s identity is compromised possibly by an unknown double agent known as “Satchel,” and she finds herself constantly fending off an aggressive army of KGB agents and German police who are out to stop her on her mission.

Kurt Johnstad’s screenplay based on the graphic novel The Coldest City by Antony Johnston chooses a non-linear approach to the storytelling with Lorraine undergoing a debriefing in front of her MI6 boss Eric Gray (Toby Jones) and a shady CIA representative Emmett Kurzfeld (John Goodman) that frames the flashback story of her ten eventful days in Berlin on her dangerous mission. Our first view of Lorraine finds her body in an ice bath literally covered in bruises, so the story of how she acquired them while in the city-under-fire holds our attention utterly, and the action set pieces staged by director David Leitch and his crack team of fight and stunt consultants are certainly the be-all and end-all of the film. Like the combat in the director’s previous John Wick, the fights are angry, brutal, and extended affairs: from an attack in a moving car where Lorraine dispatches the driver and his henchman to a lengthy duel with a dozen Berlin policemen with an electric extension cord as her only weapon and the climactic face-off with the KGB in a stairwell, in adjoining rooms, and into the street. Sometimes the script errs by not giving us enough information on the people who are focusing on her demise (their faces keep turning up but we don’t really know who they are other than the enemy), and there is a sidetracked sexual encounter with an inexperienced French agent Delphine Lasalle (Sofia Boutella) that seems inserted into the story only for titillation. Director Leitch uses the clichéd slo-mo car crashes on a couple of occasions that aren’t worthy of his otherwise stylish and crisp directorial hand, but having the mysterious “Satchel” on the periphery of the story pulling strings is nicely sustained allowing us continually to guess his identity.

Having already established her action chops in Mad Max: Fury Road among other films, Charlize Theron (who is also one of the film’s producers) handily carries the film on her firm, alluring shoulders looking sexy when required and battling realistically through the fight scenes with the intensity of a Jason Bourne but proving that she’s not impervious to pain or injury. James McAvoy’s David Percival, enjoying the hedonistic life of Berlin of the 1980s, remains something of a mystery throughout the film. Is he the infamous double agent Satchel or does he have some other agenda that only he is aware of? His full-throttled performance leaves no room for doubt by film’s end. Several fine actors find themselves playing low-key characters who contribute to the innards of the plot without engaging in the major action: Bill Skarsgård as Merkel and Til Schweiger as an enigmatic watchmaker fill these roles nicely. Roland Møller and Jóhannes Jóhannesson are among the bad guys on display, and Toby Jones, John Goodman, and James Faulkner look appropriately officious as Lorraine relates her story. Though his role is important, Eddie Marsan’s screen time is short as Spyglass, and Sofia Boutella’s Delphine Lasalle serves as an adequate emotional distraction for Lorraine at certain points of the movie.

The film’s 2.40:1 theatrical aspect ratio is delivered in 2160p resolution using the HEVC codec. Sharpness is outstanding with hair textures and skin surfaces featuring plenty of detail. Color has been desaturated and timed very coolly with strong dabs of neon throughout (those familiar with the look of John Wick will find the look here quite similar), but the use of HDR certainly emphasizes nicely the neons and other brief bursts of bright color when they appear. Black levels are similarly enriched by the application of HDR. The movie has been divided into 20 chapters.

The DTS:X sound mix (decoded on my equipment as DTS-HD Master Audio 7.1) offers the expected noisy and busy soundtrack one would expect for a major action picture such as this one. Familiar songs from the 1980s from Queen and David Bowie among others along with background score by Tyler Bates gets the full surround treatment, and there are plenty of atmospheric effects as gunfire sprays across, through, and above the action. Dialogue has been well recorded (with a fair amount of ADR according to the commentary which has been seamlessly integrated) and placed mostly in the center channel with some occasional directional placement.

Audio Commentary: director David Leitch and film editor Elisabet Ronaldsdottir have worked together on two films, and their camaraderie is palpable in this track as they recall anecdotes from the production and post production periods. This is available on the UHD and Blu-ray discs in the case.

The other bonus features can be found on the enclosed Blu-ray disc:

Deleted/Extended Scenes (7:23, HD): six scenes may be watched together or separately.

Blondes have More Gun (7:01, HD): star Charlize Theron discusses the months of training necessary for her to play the role, and her intense work ethic is praised by director David Leitch, producer Eric Gitter, and fellow actors James McAvoy and Sam Hargrave.

Anatomy of a Fight Scene (7:52, HD): director David Leitch walks us through the famous stairwell fight sequence showing in split screen the rehearsals and the finished product along with behind-the-scenes views of the filming.

Story in Motion (HD): two animated storyboard sequences are presented in separate entries: “Agent Broughton” (2:16) and “The Chase” (1:38). Director commentary is optional with each one.

An action-filled espionage thriller with a formidable woman as the central agent, Atomic Blonde offers bountiful surprises and crackerjack excitement in equal measure even if the plot doesn’t always ring totally true. Those who enjoyed the director’s John Wick will find a markedly similar tone with this opus, and the exceptional visual and aural delights of UHD complete the experience. Recommended! 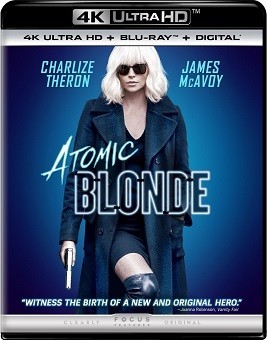