CBS’ most recent foray into colorization was two more episodes of its classic I Love Lucy show, a network mainstay since the early 1950s and still a ratings champion each time the network finds some new way to package the outrageous antics of its bubble-headed redhead and her fun-loving cohorts.

With so many of its classic sitcoms filmed in black and white during the first two decades of television broadcasting, CBS is faced with a real dilemma: how to milk the last dime of value for contemporary audiences out of its vault of classics, and the answer has been colorization. CBS’ most recent foray into colorization was two more episodes of its classic I Love Lucy show, a network mainstay since the early 1950s and still a ratings champion each time the network finds some new way to package the outrageous antics of its bubble-headed redhead and her fun-loving cohorts. Packaged last spring as the I Love Lucy Superstar Special, the program offered two more colorized episodes to its growing library of Lucy shows now being available in color. Once again, the show was a ratings winner meaning that there’s likely to be more colorized Lucy on the way.

The two newest episodes selected for colorization are among the choicest programs from six seasons of episodes available to the network. “L.A. At Last!” finally got Lucy (Lucille Ball) and husband Ricky Ricardo (Desi Arnaz) to Hollywood with friends the Mertzes (Vivian Vance, William Frawley) to begin production on Don Juan at MGM to star the Cuban bandleader. The Hollywood story arc was the lengthiest and most successful one attempted during the six seasons of half hour episodes, and the arc allowed such famous Hollywood names as Van Johnson, Harpo Marx, Richard Widmark, Hedda Hopper, Rock Hudson, and, most famously, John Wayne a chance to run headlong into the frantic redhead and her unending wild schemes. In this episode, Eve Arden and William Holden make notable appearances, both longtime friends and former co-stars of Lucy’s from her movie days. Getting William Holden on the show was quite a catch: in 1955 when the show was filmed he was among the biggest Oscar-winning stars in Hollywood, and he gets to take part in a couple of wild slapstick scenes with the Emmy-winning series star that make this episode a real classic (Lucy is no slouch in this episode either doing some funny bits with a spaghetti eating sequence and later enduring the lighting of her built-up putty nose on fire to hilarious effect).

“Lucy and Superman” from the program’s sixth season is unquestionably the lesser of the two shows in the special, but it has some memorable bits, too, with standouts being Lucy’s perilous ledge walking among dozens of very well-trained pigeons and a most impressive entrance into Little Ricky’s (Richard Keith) birthday party by TV’s Superman himself George Reeves. The episode also features Lucy’s recurring nemesis Carolyn Appleby played so delightfully smugly by Doris Singleton and even the wonderful Madge Blake present for a little bit as an apartment hunter whose presence makes it impossible for Lucy, masquerading as Superman when she thought he wasn’t going to show up, to come in out of the pouring rain. Reeves has a wonderful closing line for the episode, and it’s marvelous to see how thrilled the little children in the party scene are by his presence (being about the same age as these children when the show first aired, I could certainly identify with their delight then and now).

Colorization has come a long way from the crude early attempts that Ted Turner foisted on the public with half-colored dud versions of classics like 42nd Street, It’s a Wonderful Life, and Miracle on 34th Street. Here the colorizers have gone to the trouble of coloring eyes and tongues and hair (though Lucy’s brassy henna-colored locks don’t seem quite as rich here as they have been in some of the previous colorized episodes, and some of the suit coats remain gray without any color touches: acceptable but possibly a short cut). For the younger generation, many of whom can’t stand black and white films and television shows, it’s a decent attempt to introduce them to the classic comedies of their parents and grandparents. And, of course, the black and white versions remain for purists. The disc offers both episodes of the original shows in black and white and colorized.

The program’s original 1.33:1 aspect ratio is replicated here, and the program’s mild grain structure coming from film is also retained without digital manipulation. Skin tones here are more appealing and lifelike than in The Andy Griffith Show Christmas Special recently reviewed, and sharpness and detail are first-rate even if these are standard definition transfers and not the high definition of the network broadcast. Only the slightest bit of twitter in the weaving of the tweed jackets gives away these are standard definition transfers when up-converted by a first-rate Blu-ray player.

The disc offers a Dolby Digital 2.0 soundtrack, decoded by Dolby Prologic into the center channel. The mono mix offers era-appropriate blends of dialogue, music, and sound effects with any problems with age-related hiss or crackle on the soundtrack.

The disc offers the original 45:13 broadcast of the special with the two episodes paired together and commercial inserts (without the commercials) along with the two individual episodes in both black and white and color.

Though the I Love Lucy Superstar Special #1 was broadcast in high definition which is naturally missing on this standard definition DVD, the quality of the comedy is what’s foremost of importance, and this disc serves as a fine memento for those who want to relive this spring special on disc with two more colorized episodes of one of TV’s true classics in a growing library of color Lucy episodes. Recommended! 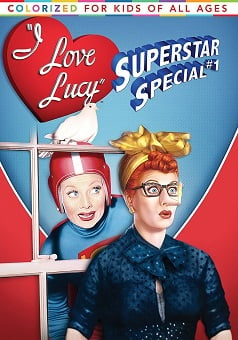