J. Lee Thompson’s Murphy’s Law is a nasty piece of goods, a violent and not-well-thought out revenge story with its protagonist as the victim rather than as the attacker.

Lee Thompson’s Murphy’s Law is a nasty piece of goods, a violent and not-well-thought out revenge story with its protagonist as the victim rather than as the attacker. Directed with panache despite the less than scintillating script, Murphy’s Law is typical of a great many crime dramas of the era with its string of murder victims, psychotic antagonist, and a thuddingly dense police department who pins its sights on one killer with no further investigation or inquiry despite the hunted being one of its own men in blue.

Released from a mental hospital after committing murder some years earlier, psychotic Joan Freeman (Carrie Snodgress) swears vengeance on those who put her away: she kills one ex-police officer (Bill Henderson) and the judge (Jerome Thor) who presided at her trial and manages to pin the murders on the officer’s still active partner Jack Murphy (Charles Bronson) by also killing Murphy’s ex-wife (Angel Tompkins) and her new boy friend strengthening the police case against Jack. When Jack is arrested, he’s handcuffed coincidentally to street girl Arabella McGee (Kathleen Wilhoite) whom he had just arrested for attempting to steal his car. Thus, when Jack breaks out, he’s tied to the trash-talking street punk who also gets blamed for some of the murders thus tying the two of them together despite their animosity toward one another. Jack must then figure out who’s framing him for these murders and subsequently do what he can to end the revenge one way or another.

Gail Morgan Hickman’s screenplay is an unfortunate mass of muddled motives and half-hearted plotting that often defies rational explanation. The police department’s complete lack of trust in one of their own never rings true, and their own investigation into these crimes begins and ends with Murphy despite his insistence that he’s being framed. (Even Murphy seems to have forgotten the threatening phone call he received from an anonymous caller vowing to bring him down as it’s never mentioned again despite it being pertinent to the case.) Even his partner Art Penney (Robert F. Lyons) does next to nothing for his partner, another facet of the script that never seems cogent. None of the characters, not even our hero, seem particularly bright (Murphy is actually taken by surprise when the killer beats him to the next crime scene after Murphy traces her apartment and doesn’t find her there.) Hickman’s script is also hampered by putting the most ludicrous spew of absurd trash talk into the mouth of Arabella that continues through the very last scene, almost comical in its ridiculousness though it’s obvious it’s meant to show the character as a tough street kid. Also present are era-typical gay-baiting and lots of scantily clad female flesh (Murphy’s ex-wife now works in a strip club and mobster Frank Vincenzo – Richard Romanus – has an almost nude prostitute servicing him in a later scene in the movie). Director J. Lee Thompson stages most of the murders with attention to detail (though the murders of both the judge and the psychiatrist played by Janet MacLachlan who had let Freeman out are rather unconvincingly staged and shot), and the entire climactic stalk through multiple floors of a shadowy office building is filled with an array of death scenes but not much logical behavior. These are people who have seemingly never heard of the word stealth when dealing with homicidally inclined people.

Charles Bronson gives his usual professional performance, perhaps a bit slower to react and not prone to thinking things through (allowing a woman shooting at him with a crossbow to reload after every shot instead of acting decisively between shots strains his credulity as a street-wise detective). Carrie Snodgress makes quite a believable psychotic even if a couple of the murders she commits seem a bit farfetched for her to have been able to pull off. It’s not Kathleen Wilhoite’s fault that the endless spew of demeaning verbiage she’s forced to recite becomes more irritating than insulting the longer she continues to talk. Her street punk has the ring of truth, but she’s definitely not been helped by the screenwriter. Robert F. Lyons doesn’t get to show much of what makes him special as an actor, but Bill Henderson has some excellent moments as Murphy’s former partner and friend so that his demise is really to be regretted. James Luisi is fine as a crooked cop, and Richard Romanus has a particularly effective scene as the tough mob boss begging for his life pitiably as Murphy pries information out of him. Angel Tompkins bravely performs a couple of stripteases and shows off her incredible body.

The film’s theatrical aspect ratio of 1.85:1 is faithfully reproduced in this 1080p transfer using the AVC codec. Apart from a few dust specks here and there, the quality of the transfer is solid with pleasing sharpness and excellently saturated color with believable and appealing skin tones. Black levels are very good to great throughout. The movie has been divided into 24 chapters.

The DTS-HD Master Audio 2.0 mono sound mix offers an era-appropriate combination of well-recorded dialogue, an 80’s style synth score by Marc Donahue and Valentine McCallum, and atmospheric sound effects which give generally good heft to the numerous gunshots and explosions which dot the picture. No age-related problems with hiss or other aural artifacts rear their ugly heads.

Audio Commentary: producer Nick Redman welcomes co-star Kathleen Wilhoite who rarely draws a breath while enthusiastically recalling fleeting memories of making the film along with sharing her many career highs and lows, and her more recent endeavors as a stage actress and would-be drama instructor.

Murphy’s Law is a late-career Charles Bronson crime melodrama: violent, obvious, and with some measure of excitement with the added bonus of Bronson’s character being on the receiving end of the story’s revenge seeker. There are only 3,000 copies of this Blu-ray available. Those interested in purchasing it should go to either www.twilighttimemovies.com or www.screenarchives.com to see if product is still in stock. Information about the movie can also be found via Facebook at www.facebook.com/twilighttimemovies. 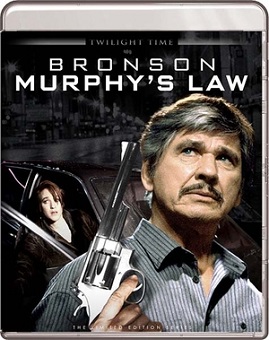