Forum List What's new Dark Style Change width
Log in Register
What's new Search
Menu
Log in
Register
Navigation
Install the app
More options
Dark Style
Close Menu
Posted on September 15, 2018 by Josh Steinberg
You are using an out of date browser. It may not display this or other websites correctly.
You should upgrade or use an alternative browser.
Incredible documentary about Leon Vitali, assistant to Stanley Kubrick 4.5 Stars

Filmworker is an extraordinarily candid documentary about Leon Vitali, the assistant to legendary film director Stanley Kubrick. Kubrick’s genius was only matched by his penchant for secrecy. As a result, there’s always been a great deal of mystery surrounding his films. This film lovingly plays tribute to Vitali, while shedding some light on Kubrick’s methods.

Filmworker tells the story of Leon Vitali, who walked away from a promising acting career to devote his professional life to director Stanley Kubrick. Vitali’s star was on the rise in the early 1970s when he was cast in a supporting role in the director’s Barry Lyndon. After observing Kubrick on the set, Vitali went up to the director, said that he wanted to work for him, and that was pretty much that. Kubrick suggested that Vitali work behind the scenes on another film to gain an understanding on the process; Vitali took a part in a television movie to get that chance, and after completing that work, came back into Kubrick’s orbit and never left.

Stanley Kubrick was a once-in-a-lifetime genius, and the stories told about him over the years tend to obscure the director’s humanity in favor of a portrait of an ill-tempered perfectionist. As first an actor and then general assistant, Vitali had a front row seat, and is of the few people best qualified to tell the stories behind Barry Lyndon, The Shining, Full Metal Jacket and Eyes Wide Shut, as well as more general anecdotes. Vitali has, understandably, a much more nuanced view of Kubrick. The two men clearly shared a deep bond, with Vitali serving as a jack-of-all-trades for Kubrick who could fulfill just about any role the director needed. As Vitali sees it, Kubrick was a man who devoted everything to his films, and if Kubrick was giving so much of himself, it naturally followed that Vitali should do the same.

The other perspective that one could take is that Kubrick took advantage of Vitali, asking Vitali to sacrifice his personal and professional life, using him to fulfill so many different roles that would normally be handled by a small army of people working for any other filmmaker. But Vitali himself rejects this interpretation; he emphasizes repeatedly that he wanted to be there. And so it went, for years, with Vitali assisting on every aspect of Kubrick’s work, from the scripting to the casting to production and post-production, while also supervising the preservation and care of the director’s older films. From Vitali’s point of view, he got to work with one of the greatest artists of the 20th century, on some of the greatest films ever made. To be part of that process was both the journey and the reward for Vitali.

Though Leon Vitali’s interviews and voiceover make him the primary star of the documentary, he doesn’t have to tell his story alone. There are interviews here with stars of Kubrick films like Ryan O’Neal and Matthew Modine, friends like Stellan Skarsgard, and former studio employees who worked with Kubrick like Brian Jamieson and Nick Redman. The interviews are wonderfully insightful, and shed light on both Kubrick’s process and Leon’s role in that process. At one point, Kubrick is compared to Gordon Ramsay’s television personality: someone who was extraordinary devoted to detail, who cared deeply about his work, but who could be prone to an eruption of temper if those around him failed to maintain his standards. If the portrait of Kubrick can seem occasionally unflattering, it feels fair, and ultimately suggests that both the overall experience and the final product made it all worth it.

For longtime Kubrick fans, much of this ground which has been hinted at elsewhere, though not in as great detail as presented here. But what makes this documentary especially worthwhile for Kubrick devotees are the interviews with actors R. Lee Ermey and Danny Lloyd. Ermey passed away before the release of the film; it’s a great gift to have one of his best on-camera discussions of Full Metal Jacket incorporated here. Lloyd rarely gives interviews about his work on The Shining, and he’s a wonderful presence here. Through these two unexpected and magnificent interviews, it becomes even more obvious how great Vitali’s contributions were to the finished films.

After Kubrick’s passing, the Herculean effort to properly preserve and master Kubrick’s films for future generations fell on Vitali’s shoulders. But once his work was completed for the last round of DVD editions, it seems that Vitali started to be left out of the picture. He no longer had an official role on the Kubrick estate, his time with Warner had wound down, and he wasn’t even consulted for the traveling exhibit of Kubrick’s archive. Thanks to Filmworker, Vitali’s role has been properly memorialized, and since production on the documentary concluded, he has also been rehired in a more official capacity to represent Kubrick’s estate in relation to the films.

Filmworker is an outstanding documentary that serves as both an illuminating portrait of Leon Vitali as well as an essential look into the career of Stanley Kubrick. The documentary’s director, Tony Zierra, has done the film world a tremendous service by capturing this story.

Filmworker is presented on DVD in a 1.78:1 aspect ratio transfer, enhanced for widescreen televisions. New footage shot of the documentary looks clean, crisp and pristine, while the archival clips contained within are of varying quality. Despite the variety of sources used, it’s never a distraction when the film switches from new to old footage and back again. Ironically, the new interview footage often looks better than the clips from the films, which was also the case during theatrical screenings of the documentary. (The disc as a whole is a very faithful reproduction of how the documentary appeared in theaters.)

The disc presents two audio options, both in Dolby Digital: a 5.1 surround track and a 2.0 stereo track. The 5.1 track offers a bit more separation but is still more oriented towards the front speakers, making both options fairly similar. The interview subjects are well-recorded, making dialogue easy to understand.

Optional English SDH subtitles are also included on the disc.

Q&A with Leon Vitali and director Tony Zierra (11:00) – Vitali and Zierra answer questions following a screening of the film. Zierra’s comments about how the film came to be are particularly insightful.

Trailer (2:28) – The original theatrical trailer highlights some of the more memorable moments from the documentary.

Filmworker is a remarkable documentary about Stanley Kubrick’s assistant, Leon Vitali. Vitali is a warm and outgoing presence with an encyclopedic knowledge of the director’s films, and this documentary reveals just how big of a part Vitali played in bringing Kubrick’s films to the screen. The documentary’s director, Tony Zierra, has done a tremendous service for Kubrick fans everywhere by creating what is perhaps the single most insightful piece of work to date on what it was like to be in the trenches with one of the greatest artists of the twentieth century. With this documentary, Leon Vitali’s contributions to this amazing body of work can now be understood by fans and scholars for generations to come. Kino’s DVD release is wholly accurate to the theatrical presentation, and the bonus Q&A session is a welcome inclusion. This documentary is well worth seeing for film fans in general, and absolutely essential for Kubrick fans.

This is absolutely essential viewing for all Kubrick fans. I’m truly delighted that I got to be the reviewer for this one.

Don’t let the fact that it’s DVD-only dissuade you from checking it out!
P

Not dissuaded by the DVD; but I am surprised there wasn't a BD, as well.
Yet, as Josh has often said, the greater good far outweighs the rest;
and newer insights of a genius filmmaker - in any format - will wait for nobody.
Last edited: Sep 17, 2018
E

Definitely very interested in this. Thought he was great in Barry Lyndon and Eyes Wide Shut and would love to hear more about his behind the scenes "assistant" role.

English Invader said:
Definitely very interested in this. Thought he was great in Barry Lyndon and Eyes Wide Shut and would love to hear more about his behind the scenes "assistant" role.
Click to expand...

Simon, in that case, I think you'll love this movie. It turns out in this case, "assistant" meant that he was assisting in pretty much all aspects of production. It was Vitali, for instance, who discovered Danny Lloyd for The Shining, and who also worked as R. Lee Ermey's acting coach on Full Metal Jacket. And it was Vitali who discovered the twin girls for The Shining (the script didn't specify that they be twins, but he saw those girls and they just looked perfect for the part). And lots of little and big things along the way.

I don't think this would be a dream job for many people, but for the few who would be interested in doing that kind of work, it sounds like the experience of a lifetime.

Director Tony Zierra spent years tracking down and interviewing people who worked on EYES WIDE SHUT for a documentary about Kubrick's final film to be entitled SK13. At the very end of the process he encountered Leon Vitali. So mesmerized by this man's amazing story devoting his life to Kubrick he created this documentary about the man himself. He's now begun the task of editing the years of EYES WIDE SHUT interviews into SK13, which we'll hopefully see in a year, or two.

I don't think they mention that in the film proper, but it is discussed during the Q&A bonus feature.

Eyes Wide Shut is one of my very favorite Kubrick films, so I am naturally looking forward to that documentary!

Finally saw this today, with Leon in the audience, two seats next to me, followed by an interview/Q&A with the man himslef, very interesting, and a great movie. What a life. He spent some time in Sweden in he late 70s/erly 80s, and married, and his ex-wife and two (grown) children were also present, both for the movie and the interview.
Really makes you wonder what makes a man tick.

I'd not heard of this movie until I watched it on Netflix earlier this week. Truly an amazing and revealing look at a life spent in the service of art and Stanley Kubrick.

Just watched the UK release of this DVD and found it a fascinating story.
Unfortunately our 'Dogwoof' released edition does not include the 'Q and A'......
Last edited: Dec 28, 2018
You must log in or register to reply here. 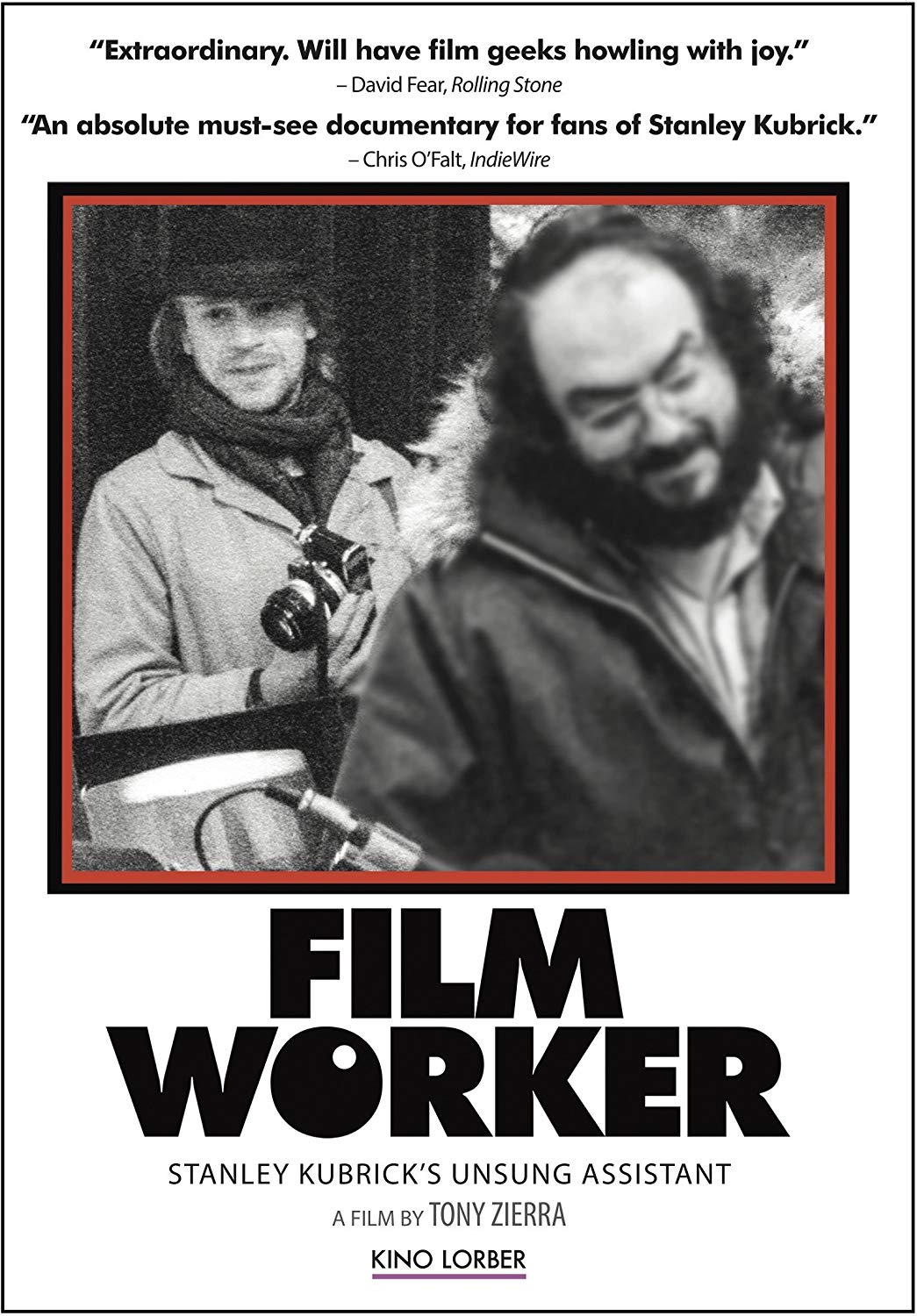