Woman Walks Ahead is a drama based on the true story of Catherine Weldon, a painter who traveled from the east coast to Dakota to paint a portrait of legendary native chief Sitting Bull in 1890. The film boasts a marvelous performance from Michael Greyeyes as Sitting Bull, but the rest of the film falls short of his excellence.

Woman Walks Ahead tells the true life story of Catherine Weldon (Jessica Chastain), a painter who traveled from New York to Dakota in 1890 in the hope of painting the portrait of Sitting Bull (Michael Greyeyes), who at that point was a legendary figure who had chosen to live his remaining days outside the spotlight. When she arrives, she’s confronted by Colonel Silas Grove (Sam Rockwell), who had tried his best to discourage her travels. Grove is aware that the Native Americans he’s tasked with overseeing are getting a bad deal, but it’s his job to keep the peace, and he’s concerned that Catherine’s arrival will inflame tensions between the native tribes and the soldiers in charge. Grove is eventually and predictably right, of course, but first there is a courtship of sorts as Catherine must persuade a hesitant Sitting Bull to, well, sit for her. He’s initially unwilling, but after she promises him a huge sum of money, he eventually relents. As the two spend time getting to know each other in the course of working on the portrait, Catherine’s respect for the man grows deeper, while Sitting Bull rediscovers his passion for life and leadership. (In real life, the painter was known as “Caroline Weldon” but the movie has changed this to “Catherine” for reasons which are not explained.)

The film is a bit of a mixed bag. The very best the film has to offer is Michael Greyeyes’s performance as Sitting Bull; he’s absolutely incredible, bringing a great sensitivity and authority to the role without ever feeling like a cliché. He is the film’s biggest and best selling point, and his performance is worthy of every accolade and positive notice that he receives. Sam Rockwell is his usual, dependable self, turning in a performance that shows us a more understanding interior underneath a gruff and racist exterior. The same description could be applied to his recent Oscar-winning turn in Three Billboards outside Ebbing, Missouri, but unfortunately, Rockwell isn’t given as much to do here. As the film’s ostensible star, Jessica Chastain’s performance seems somewhat lacking compared to her best work. It may be the dodgy, unidentifiable accent that wavers from scene to scene, or it may be a script that treats her more as a bag of traits than an actual character, but whatever the cause, it’s not her best performance.

The film was written by Steven Knight and directed by Susanna White, and the blame for the film’s biggest flaws must be laid at their feet. Knight’s script is, frankly, a bit of a mess. Because the script is uneven, White is left with limited options to make the film flow. The film’s tone is just all over the place, and the pacing also struggles. It feels as if the writer and director are trying to do too much at once, as the film bounces from quieter, more moving scenes with just Chastain and Greyeyes, or Chastain and Rockwell, to larger sequences with entire tribes and armies preparing to do battle. The film’s scale is too larger to serve as just a quiet character piece, but too small to accommodate the epic feel that the larger moments demand. The film also lacks historical accuracy in some key spots, and while that in and of itself isn’t a problem, if the history was going to be embellished, it might have been better to change things in such a way as to play to the film’s strengths. This is really a film where it might have been better to stop and go back to the drawing board. There’s a great film hiding somewhere inside it, in the friendship between Catherine and Sitting Bull, and Greyeyes and Chastain have the talent to pull it off. But the contrast between their smaller story and the larger story of the tribes preparing to rebel against the U.S. government doesn’t work, and it often feels like two movies haphazardly spliced together.

Woman Walks Ahead is presented in its original aspect ratio of 2.39:1. The entirety of the film has a slightly washed out look that seems clearly intentioned by the filmmakers. The image is generally sharp and clear, and there is no evidence of any untoward digital manipulation or compression artifacts. There is something about the look of the film, and it’s hard for me to put my finger on what exactly it is, that made it unconvincing as a period piece. For a film that’s supposed to take place in 1890, there was something about the photography that made seem wrong for that time. It’s by no means badly shot, and there are lots of gorgeous views to be seen here, but it doesn’t quite have the right feel for the period.

The film’s 5.1 audio track is presented in the lossless DTS-HD MA format. The mix is mostly front oriented, but the music takes advantage of the surround channels, as do the occasional sound effect. While the actual mix isn’t demonstration caliber, it certainly works for the film.

A “Making Of” Story with Director Susanna White (10:30, HD) – Director White narrates clips from the film and behind the scenes footage, explaining her motivations for taking on the project and goals she set out to accomplish, along with her insights into the process and the finished film. This light but entertaining featurette is the best bonus offered on this disc.

Deleted Scenes (5:40, HD) – These deleted and extended moments are enjoyable on their own, but their removal from the finished film is understandable as they do not add much to the final product.

Audio Commentary with Director Susanna White – Director White details the film’s production as well as the real historical context that inspired the film. There are some moments of silence throughout when it appears that White seems to stop to watch the film. This commentary covers a lot of the same ground as the featurette, but in a less efficient manner.

Digital Copy – The disc includes a Digital Copy code which can only be redeemed at Vudu or FandangoNow.

Woman Walks Ahead has a great idea for a film in examining the unlikely friendship shared by painter Catherine Weldon and Sitting Bull. But the film is weighed down by a larger story of tribal conflict and eventual battle with the U.S. government that isn’t as well executed as the smaller moments. While Jessica Chastain and especially Michael Greyeyes are great to watch, the film as a whole does not give enough space to its greatest assets, which are the performances. While the disc boasts a quality visual and aural representation of the film, the bonus features are light, with the audio commentary lacking focus. Whether an outstanding performance from Greyeyes is enough to make up for an otherwise mediocre film may vary for each individual viewer.

Nice review Josh. I purchased this film on Vudu for $4.99 since it looked interesting. I’ll have to check it out as I still haven’t watched it.
Expand signature
It's gonna be a hell of a ride. I'm ready. .
Reactions: Josh Steinberg

Tino said:
Nice review Josh. I purchased this film on Vudu for $4.99 since it looked interesting. I’ll have to check it out as I still haven’t watched it.
Click to expand...

Same here.
Expand signature
Crawdaddy's favorite "The Mandalorian" Quotes: "This is the Way" and "I have Spoken" 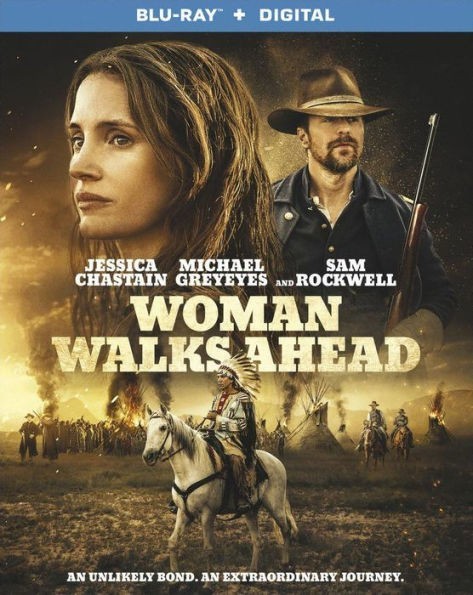