For Volume III in the Film Noir: The Dark Side of Cinema series, Kino has assembled three more Universal noirs that touch upon some traditional and untraditional vices in the genre: the black market (Abandoned), gambling and addiction (The Lady Gambles) and drug dealing (The Sleeping City). All three films are making their Blu-ray debut here.

After touching down in Los Angeles to find her missing sister, Paula Considine (Gale Storm) soon learns that she was found dead of an apparent suicide. Unwilling to accept the official cause of death since her sister had recently given birth and that the baby is also missing, she teams up with a crime reporter (Dennis O’Keefe) to find out the truth. They soon learn of a black market baby ring headed by the seemingly respectable Leora Donner (Marjorie Rambeau) and assisted by a sleazy private eye (Raymond Burr); With the assistance of the police, a sting operation is set up, but it could lead to deadly consequences…

Although better known for directing the cult Technicolor sci-fi movie This Island Earth (1955), Joseph M. Newman proved to be very adept in the film noir genre with Abandoned. Clearly cashing in on the success of The Naked City (1948), the film is told in a semi-documentary style; however, the vice of black market babies made this one stand out from the wave of movie made in the period. Also notable are the performances from a top notch cast featuring the likes of Jeff Chandler, Marjorie Rambeau, Dennis O’Keefe, Jeanette Nolan, Mike Mazurki and the future Perry Mason himself, Raymond Burr; the movie also benefits from the on location cinematography by the distinguished William H. Daniels (who was just fresh off of winning an Oscar for his work on The Naked City). While it may follow some conventions of the quasi-documentary style of film noir, Abandoned still offers up some unique touches that definitely make it a cut above the norm.

Joan Boothe (Barbara Stanwyck) went from having it all with her reporter husband David (Robert Preston) to becoming an out of control gambler on the verge of a nervous breakdown. And it all started with a trip to Las Vegas, where Joan is introduced to the thrill of gambling by casino owner Horace Corrigan (Stephen McNally) and both loses and wins big. Soon the thrill turns into an addiction, and Joan plunges further down the rabbit hole in pursuit of the ever fickle Lady Luck; the question is: can David manage to pull Joan out of the downward spiral before the stakes include her life?

The legendary Barbara Stanwyck was no stranger to film noir (largely in part to her famed performance in Billy Wilder’s classic Double Indemnity), but The Lady Gambles returns her to familiar territory while also working in elements of melodrama. Working under the direction of Michael Gordon, the actress basically does for compulsive gambling what Ray Milland did for alcoholism in The Lost Weekend (1945); in short, Stanwyck doesn’t hold back in showing how far her character is willing to go to chase after that big score and destroying and degrading herself in the process. She’s also working with a great supporting cast, including Robert Preston, Stephen McNally, Edith Barrett, Philip Van Zandt, Leif Erickson, Don Beddoe, Nana Bryant, and Tony Curtis in one of his earliest film roles; further buoying the well written script are the contributions of longtime (and largely underrated) Universal composer Frank Skinner and the distinguished cinematographer Russell Metty. While it has fallen by the wayside over the years, The Lady Gambles is worthy of rediscovery not only as a decently made noir tinged melodrama, but as a worthy companion to the previously mentioned The Lost Weekend highlighting one of the best movies Golden Hollywood ever made about addiction and its destructive consequences.

When an intern is shot dead on a East River pier outside of Bellevue Hospital, the NYPD is at a loss as to who could’ve wanted the intern dead. So the inspector in charge of the case (John Alexander) coordinates with the Commissioner of Hospitals a plan to place a mole in the hospital where the intern worked at to uncover a lead; that’s where Confidential Squad member (and former medical corpsman) Fred Rowan (Richard Conte) comes in. During his ‘tenure’, he becomes enamored with the trauma nurse Ann Sebastian (Coleen Gray) and friendly with the elevator operator (Richard Taber); what he uncovers is a narcotics ring operating within the confines of the hospital, with the leader not what Fred was expecting…

George Sherman was a director better known for his work on westerns, but The Sleeping City is one of his best films overall and a prime example of the film noir utilizing the semi-documentary style. Notable for being shot entirely on location (a novelty few motion pictures could boast at the time), the New York locales add to the atmosphere and suspense of the tale. Also the idea of drug running coming out of a hospital – especially involving opiate prescription drugs – was more than a little different than what was seen in mainstream noirs at the time; apparently, it rattled then NYC mayor William O’Dwyer so much that he insisted that the prologue that has Conte basically telling us the story is fictional be added in order to avoid further sullying the reputation of Bellevue. Though a bit economical in terms of pacing and plotting, the movie does boast three solid performances from Conte, Taber and Gray – the latter breaking out from her seemingly wholesome image in movies prior to this; there’s also an uncredited appearance by Robert Strauss as Lt. Barney Miller (no relation to the character made famous by Hal Linden on television in the 1970’s). With well sustained tension and great use of its surroundings, The Sleeping City is a neat little noir notable for bringing a then novel vice into the genre that’s become unfortunately more common today.

All three films are presented in their original 1:37:1 aspect ratios for this release. Each film exhibits organic film grain with fine details and gray scale both given a faithful representation. As for problems in regards to scratches, tears, fading or dirt, all three transfers have very little in that department; in short, this release likely represents the best all three movies here are represented on home video, with Abandoned and The Sleeping City besting their previous Universal MOD DVD releases and The Lady Gambles surpassing its presentation in The Barbara Stanwyck Collection DVD set.

All three films have their original mono soundtracks presented on DTS-HD Master Audio tracks for this release. Each track has strong dialogue and sound mix with the music scores for each movie given strength, direction and fidelity; there’s minimal problems like distortion, crackling or hissing present on each track. In short, this release likely represents the best each movie will ever sound on home video, easily surpassing their previous incarnations.

Commentary by film historian Samm Deighan – Deighan presents a wealth of information about the movie, its principal cast and crew as well as a rarity of black market babies as a plot device in film noir in this newly recorded commentary track.

Bonus KLSC Trailers – Thunder on the Hill, The Price of Fear, Naked Alibi

Commentary by film historian Kat Ellinger – For this newly recorded commentary track, Ellinger presents a lot of info about the movie as well as a few tantalizing parallels to Stanwyck’s real life.

Bonus KLSC Trailers – Witness to Murder, The Great Man’s Lady, Kiss the Blood Off My Hands

Commentary by film historian Imogen Sara Smith – Newly recorded for this release, Smith goes over the movie, the cast and the real life Bellevue Hospital’s history.

Kino continues its great streak of reviving hidden noir gems on home video with Film Noir: The Dark Side of Cinema III. The three movies in this volume – Abandoned, The Lady Gambles and The Sleeping City – are each given solid HD transfers in addition to three informative commentary tracks going into each film. Highly recommended for fans of classic movies and film noirs. 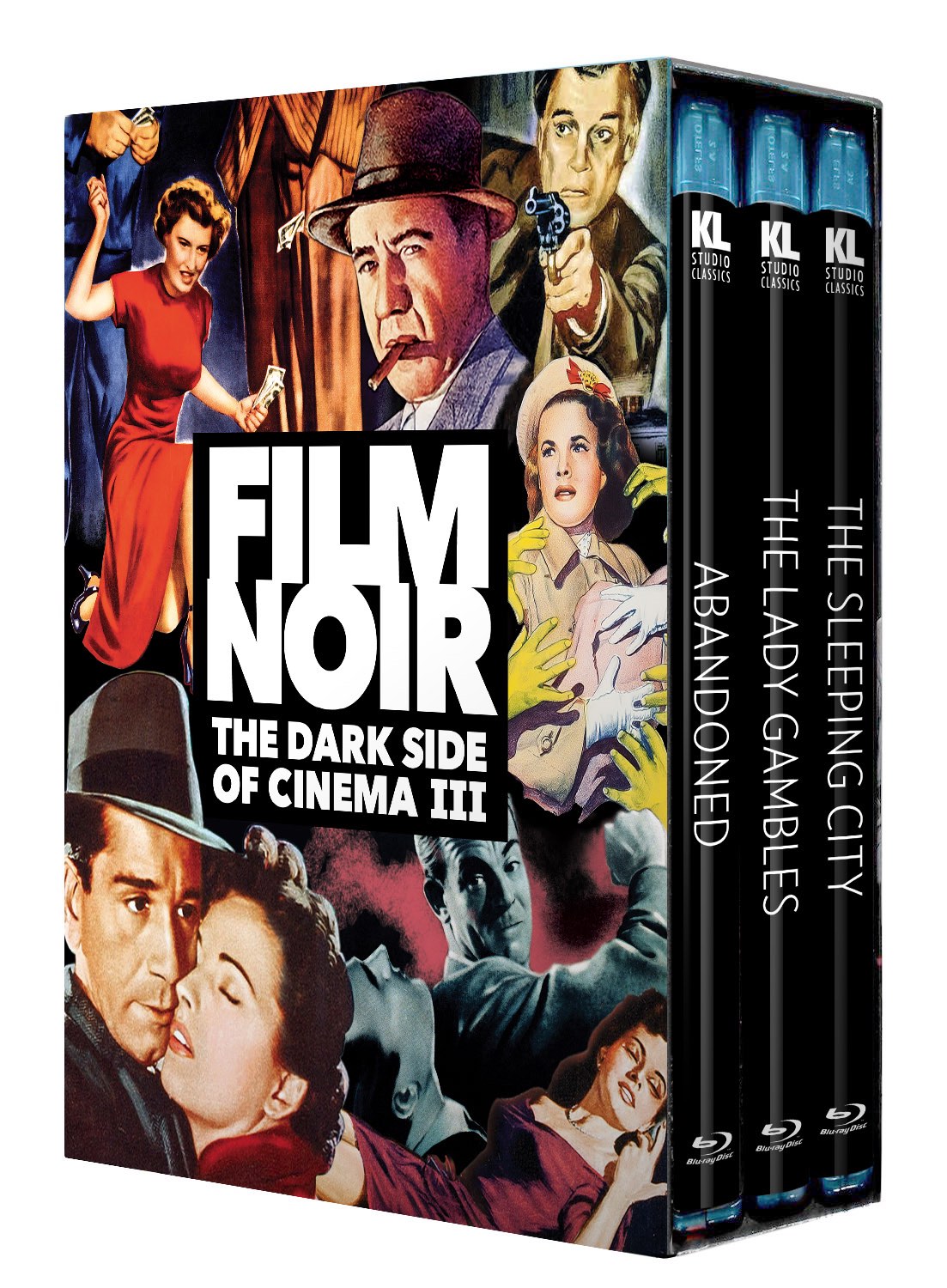