Forum List What's new Dark Style Change width
Log in Register
What's new Search
Menu
Log in
Register
Navigation
Install the app
More options
Dark Style
Close Menu
Posted on July 12, 2020 by t1g3r5fan
You are using an out of date browser. It may not display this or other websites correctly.
You should upgrade or use an alternative browser.
Three Universal noirs debut on Blu-ray 3.5 Stars

Following the 1940’s, film noir started to change with the times and the film industry. Among those changes included filming in widescreen and – in some cases – in color; for the most part however, the genre stuck to its tried and true formula of complicated characters and scenarios that had a nightmarish reality to them. For their latest release in the Film Noir: The Dark Side of Cinema series, Kino has filled Volume 2 with the blu-ray debuts of three movies from Universal (Thunder on the Hill, The Price of Fear, and The Female Animal).

During a torrential rainstorm and flood in Norfolk, England, a convent hospital is where convicted murderess Valerie Carns (Ann Blyth) is stranded, awaiting the hangman’s noose in Norwich for the murder of her brother. However, Sister Mary Bonaventure (Claudette Colbert) – the head of the convent’s hospital ward – believes that Valerie is innocent, but quickly runs into resistance from the sergeant escorting Valerie, the convent’s doctor (Robert Douglas) and the Mother Superior (Gladys Cooper), all of whom dismiss any potential alternative to Valerie’s guilt for different reasons. Undeterred – and spurred on by guilt of the death of her own sister – Sister Mary will soon find out that the real killer has been hiding in plain sight all along…

Douglas Sirk is better known for his subversive melodramas that came later in the decade, but Thunder on the Hill proves that he can handle a noir mystery as well; not exactly shocking since he had previously directed a similar mystery years prior, the Lucille Ball headlining Lured (1947). Here, Sirk uses the trappings of a convent of the English countryside (recreated on the Universal backlot) as the setting for a different battle between life and death and a test of individual faith; it’s stylishly shot by William H. Daniels (Greta Garbo’s longtime cinematographer) and the film moves along quite nicely in its brief running time, setting up its twists and turns quite well (even if it does lag from time to time). Best of all, Sirk manages to wrest some solid performances from his cast – especially from Colbert, Blyth, Douglas, and Cooper – making Thunder on the Hill a solid (if somewhat minor) entry in the director’s oeuvre.

Businesswoman Jessica Warren (Merle Oberon) seemingly has it all, until the night she’s involved in a fatal hit-and-run accident caused by her intoxication following a successful business deal. Trying to cover her tracks, her efforts manage to ensnare dog track owner David Barrett (Lex Barker), whose partner is murdered by the gangster (Warren Stevens) trying to muscle in on David’s business. When David and Jessica cross paths, their lives are plunged into a maelstrom of blackmail, betrayal, and murder, of which both could end up not surviving from!

After spending much of the 1930’s and 1940’s working as a character actor with appearances in Gunga Din (1939), His Girl Friday (1940) and Road to Morocco (1942) to his credit, Abner Biberman turned to directing in the 1950’s and The Price of Fear stands as one of his better directorial efforts in Hollywood. Here, the simple tale of how one accident starts to spiral out of control is well plotted and shot in true noir fashion. Biberman keeps everything moving along at the clip of a speeding train (which does factor in the film’s climax) and keeps the twist and turns coming in this genuinely surprising and entertaining film. Standouts here include Oberon, Barker, Stevens, Charles Drake (as the detective onto both David and Jessica) and Stafford Repp (as the ill-fated cab driver); proving that you truly can’t keep a good actor down, Biberman returns to his roots by making an uncredited appearance as the pathologist. The combination of solid performances, great twists and breathless pace help to make The Price of Fear – in this writer’s opinion – the best movie in this set and probably the best feature film that Abner Biberman directed; one final note: this movie was part of a double bill with The Creature Walks Among Us during its initial release (interesting pairing, isn’t it?).

Glamorous yet fading Hollywood star Vanessa Windsor (Hedy Lamarr) is saved from an on-set accident by extra Chris Farley (George Nader); she repays him by giving him a job as a caretaker of her beachfront property. However, Chris’ life becomes more complicated not only by becoming arm candy for Vanessa (which he resents), but by becoming romantically involved with her adopted daughter Penny (Jane Powell). On top of that, he’s also fielding an offer from a friend to shoot a movie in Mexico involving man eating plants in its plot; life in Tinseltown has never been more complicated…

The Female Animal truly stands out in this set because it’s not really a true film noir per se, but more of a melodrama with some noir touches. Here, under the direction of Harry Keller (who also worked as a film editor and producer for Universal) and produced as well as co-written by Albert Zugsmith (who also produced Orson Welles’ noir masterpiece Touch of Evil – ironically, the ‘B’ picture in the double bill involving this movie!), human emotions and motivations prove to be just as dangerous as a loaded gun. While the plot may not have much substance – though its loaded with ripe dialogue – the movie does contain some solid performances, the most notable being a stunning Jane Powell – in her first dramatic turn following years of MGM musicals – stealing every scene she’s in as Vanessa’s alcoholic and wild adoptive daughter. Also worth mentioning are Jan Sterling as a fellow aging actress (one could make the argument that Lamarr and Sterling’s characters could be surrogates for Joan Crawford and Bette Davis, but this came well before the Baby Jane dramatics), Jerry Paris as Chris’ friend trying to finagle a movie deal for him, Mabel Albertson as one of Chris’ neighbors in the apartment villas, Ann Doran as a nurse, and noted character actor James Gleason in one of his last performances; this movie would also be the last of Hedy Lamarr’s film career. While not a true film noir, The Female Animal still has several of the genre ingredients to go along with pulpy dialogue and situations that can satisfy fans of noir, melodrama and camp cinema; in short, it’s more entertaining than it has any right to be.

All three films’ original mono soundtracks are presented on a DTS-HD Master Audio tracks for this release. Dialogue on all three tracks are strong and clear, with sound effects and music scores also given a faithful representation with clarity and fidelity. There’s minimal instances of issues like hissing, crackling and distortion present, which means that all three movies have – likely – the best audio presentation on home video.

Thunder on the Hill

Bonus KLSC Trailers – Since You Went Away & The Tarnished Angels

The Price of Fear

Theatrical Trailer (0:19) – Likely taken from the second half of a double bill trailer with The Creature Walks Among Us.

Commentary by film historians David Del Valle & David DeCocteau – Recorded for this release, Del Valle and DeCocteau dissect the film and its themes along with some interesting tidbits.

Film Noir: The Dark Side of Cinema II has three very interesting titles in its collection, pushing a little farther in the noir genre and exploring new and familiar territories at the same time. Kino has done a typical solid job with this release, with solid transfers on all three films and a very informative and entertaining commentary track on The Female Animal. Recommended for fans and completists of the film noir genre.

Thank you for your review. I expect to watch all three movies of this BD set in August during TCM's "Noir Alley's" recess due to their annual "Summer Under the Stars" movie festival.
You must log in or register to reply here. 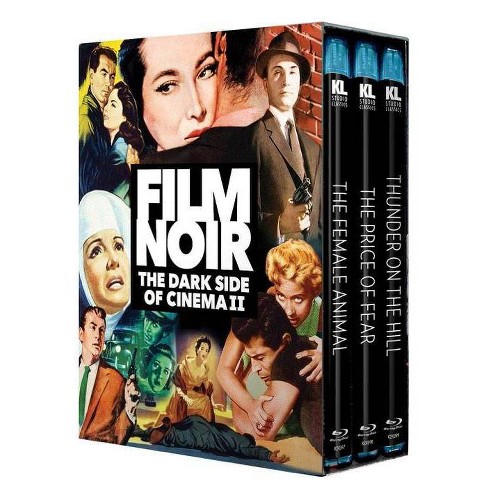