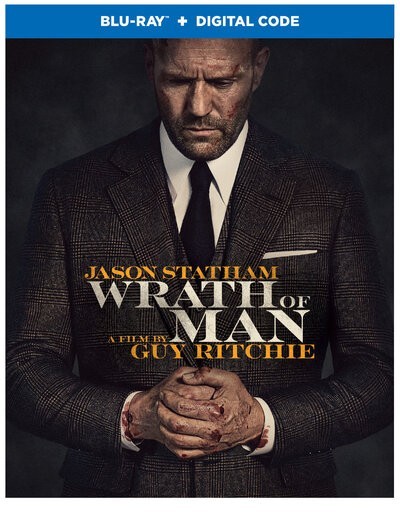 Own it Early on Digital on June 29
Own it on Blu-ray™ & DVD on July 13
​
Burbank, CA, May 28–Director Guy Ritchie (“RocknRolla”, “Sherlock Holmes”, “Sherlock Holmes: A Game of Shadows”,”The Gentlemen”) teams up with Jason Statham (“Lock, Stock and Two Smoking Barrels”, “Snatch”, the “Fast & Furious” franchise) in “Wrath of Man”, an action-packed revenge heist film about a mysterious security guard out to settle a score. The film is Ritchie’s fourth directorial collaboration with Statham.
Directed by Ritchie from a screenplay by Ritchie, Ivan Atkinson and Marn Davis, the film stars Statham, Scott Eastwood (“The Fate of the Furious,” “Pacific Rim: Uprising”), “Andy Garcia (“The Mule,” “Oceans Thirteen”), Holt McCallany (“Three Kings”, “Fight Club”), Jeffrey Donovan (“Hitch”, “Sicario,” TV’s “Burn Notice”), Josh Hartnett (“Pearl Harbor”, “Black Hawk Down”), Laz Alonso (“Avatar”, “Fast & Furious”), Chris Reilly (TV’s “Game of Thrones”), Raul Castillo (television’s “Looking”), DeObia Oparei (television’s “Game of Thrones,” “Moulin Rouge!”) and Eddie Marsan (“The Gentlemen,” “Sherlock Holmes,” “Sherlock Holmes: A Game of Shadows”).
The film is produced by Ritchie, Atkinson, and Bill Block and is based on the 2004 French film “Cash Truck” (“Le Convoyeur”), written and directed by Nicolas Boukhrief.
“Wrath of Man” will be available on Digital June 29 and on Blu-ray and DVD on July 13. The Blu-ray disc features the film in hi-definition and the DVD features the film in standard definition.

SYNOPSIS​
Mysterious and wild-eyed, a new security guard for a cash truck surprises his co-workers when he unleashes precision skills during a heist. The crew is left wondering who he is and where he came from. Soon, the marksman's ultimate motive becomes clear as he takes dramatic and irrevocable steps to settle a score.

Another title only getting a Blu-ray release at this time, but is available in 4K with HDR/DV digitally.
You must log in or register to reply here.