Valerian and the City of A Thousand Planets - Luc Besson Q&amp;A 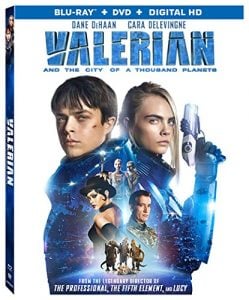 On October 19th, as part of the promotion for the upcoming Blu-ray release of Valerian and the City of A Thousand Planets, I attended a Q & A in Hollywood with producer/director Luc Besson, along with representatives of multiple other news outlets and websites. Special Thanks to Lionsgate Home Video, and to Click Communications for inviting HTF to this event and bringing me into the room.

In my preparation for this interview, I watched the film, which is a wild visual feast of computer animation combined with live action footage, all engineered to bring the French science fiction comic book series by writer Pierre Christin and artist Jean-Claude Mezieres to life on screen. The comic series has existed since the late 1960s and continues to have life and fans to this day, with the writer continuing the adventures of lead characters Valerian and Laureline in novels that are yet to be published. Valerian and the City of A Thousand Planets is the single most expensive French film to be produced in the history of cinema, with a budget totaling nearly 200 million dollars. It was independently funded, and the Wikipedia article on the movie indicates that Besson did some personal funding to get the movie completed. Unfortunately, the movie did not deliver at the box office – with a worldwide take of around 225 million dollars. A 200 million dollar production would need to earn close to 600 million dollars to come out ahead, meaning that there is real pressure for the home video release to somehow get plenty of attention and make up the considerable shortfall. Besson intends to make further Valerian movies, if it is possible to do so. And we should keep in mind that he’s previously made movies like Lucy, which cost far less and made far more. So I wouldn’t be so sure that he won’t make more movies with these characters…

On the day of our gathering, the various correspondents were brought to the MA Theater at Estrella on Sunset Blvd, where we were shown two featurettes from the Blu-ray. One of the featurettes dealt with the production and stunt work on the set, including footage of how actors Dane DeHaan and Cara Delevigne dealt with performance of their own stunts in various scenes on set. Delevigne was shown both in stunt rehearsals for an on-screen fight sequence and in shooting the actual fight on set – as well as in various moments where she was flown on a wire rig. Another featurette dealt with the various cameos by name actors who came through the production to deliver their performances as needed, including Rihanna (wearing many, MANY costumes for a single sequence), Ethan Hawke playing an unsavory character and Clive Owen as the usual authority figure with secrets of his own.

Following the screening of the two featurettes, Luc Besson came out to the front of the MA Theater and joined us for a brief Q&A. The questions came from all sides of the theater, but quickly got to the heart of the movie and its production.

Besson was asked about how he worked with the original Valerian comic book stories and artwork and who he developed the film from this material. Besson’s response was that he had the movie in his head throughout the development and production process. He had issues working with the production staff in that he was trying to communicate visual ideas from his imagination that not everyone was able to grasp, at least not immediately. Besson was also adding visual concepts of his own into the Valerian story structure, particularly the multi-dimensional Big Market sequence that dominates the first third of the film. In discussing the difficulties of translating his visual concepts to a crew or an audience, Besson repeated a story he’s told in the past about screening his film The Fifth Element in Utah and having a local father walking out of the theater because the movie was just too wild for him to understand.

I then asked Besson about the movie being the largest funded independent film of all time – something that would apply to the Star Wars trilogies when they were being produced by George Lucas. I also mentioned something discussed in the film’s Wikipedia page, where crowd-funding was also discussed as part of the fundraising done to get this film completed. Besson’s response to me was to ignore most of the question and to demand to know why I thought the movie was “crowd-funded”. He was openly offended at this question and stated flatly that he didn’t care about the “business” of filmmaking, caring only about “the art.” I then restated the question to note that I was asking about the movie being put together through non-major sources, meaning not through a conglomerate studio like Warner Brothers or Fox. Besson became offended again, describing his own company EuropaCorp as a “mini-major” and refusing to even discuss this notion. So I asked him about the notion of making further Valerian feature films (being careful not to mention this one’s performance at the box office for fear of closing off the discussion completely). Besson noted that he has already written episodes 2 and 3 and even started parts of 4, with a further note that there are actually a potential 27 episodes he could make. I noted to him that in all his filmography, the common feature is that Besson always goes “all in” with his storytelling, whether that be with the diving material in Le Grand Bleu, the action material in Leon or the wilder parts of Lucy. Besson’s response was to say that this is the only way he knows how to create. He said he’s an artist, and that he writes every day, starting his work at 430am.

When asked by another correspondent, Besson repeated an oft-told story about how much he has loved the Valerian comics since he was 10 years old, and about how Jean-Claude Mezieres castigated him during the making of The Fifth Element for doing that rather than Valerian. Besson’s thought was that he could not have produced a Valerian movie until now due to all the aliens and monsters that needed to be part of the show. Besson added that he had written a potential draft for a Valerian movie in 1997 or 1998 but was so struck by a screening of 2009’s Avatar that he tossed his earlier script in the trash and started over. Besson stated his opinion that this Valerian movie before us is solely based on his current modern-day imaginative approach, ignoring that the many of the technical ideas, creatures and even parts of the story come from 20th century creators.

One of the correspondents asked Besson about finding new filming techniques for this movie, given that it’s mostly a greenscreen/bluescreen situation along the lines of George Lucas’ Star Wars prequels. Besson looked honestly confused by this question and asked for it to be repeated. After hearing it again, Besson flatly stated that he never changed his existing techniques for this movie. As an example, he cited his use of Steadicam on set for the opening Pearl sequence where the camera goes in and out of a CGI house and environment.

One of Besson’s final comments in the Q&A was to mention how in recent years, he encountered a young boy with a big red Mohawk who told Besson how much he loved his 1985 film Subway. Besson was struck by this, realizing that the boy hadn’t even been born for years after that film was released. He had never thought his movies would have a life beyond him.

With that, our Q&A was concluded. Luc Besson was available for further questions on a more individual basis, but I chose to forego this, as he had already answered (or refused to answer) the questions I really had for him. And there were other journalists from various outlets who clearly had other issues they wanted to address. For the purposes of HTF, I felt Besson had already given us plenty of material to examine.

I can’t say that the film is a particularly good one, or that it’s one that will stay with me past this year. But it certainly is an eye-popping display of CGI brilliance, even if the underlying story doesn’t bear much weight. As was noted in the Q&A, when Luc Besson makes a film, he goes all-in. Valerian and the City of a Thousand Planets will hit store shelves on Tuesday. So the question now is whether home theater audiences will go with him. 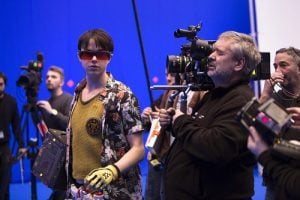 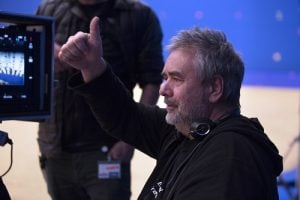 I would have bought it if they had had the brains to do a 4K/3D combo pack in NA, but, as usual, they didn't, so it can sit on the shelf whenever it comes out.

This would be my question as well since 3D is the only reason to see this Turkey. In 3D the visuals make up for a lot.

I am not familiar with the comics at all, and I wanted to really like this movie. The visuals and attention to detail are amazing (similar to 5th Element), but I found the story went sideways and got bogged down about halfway in. Having said that I have ordered it on UHD as I would love to experience it again with a large bucket of popcorn at home in 4K HDR.

Its interesting that LB was so touchy about the financing. I would think allowing a "mini-major" studio like EuropaCorp to be able to pull funding from non-traditional/independent sources would be good for "art", allowing movies that might not have had a chance to be made in a large studio system, the chance to be made?

Adam Gregorich said:
Its interesting that LB was so touchy about the financing. I would think allowing a "mini-major" studio like EuropaCorp to be able to pull funding from non-traditional/independent sources would be good for "art", allowing movies that might not have had a chance to be made in a large studio system, the chance to be made?
Click to expand...

If Valerian was a financial disaster (which we won't know for sure until EuropaCorp's financial statements are audited and revealed publicly), then it may very well put the kabosh on this type of funding at a large scale. (ie. Once burned, twice shy for non-traditional/indie sources of cash).

All it takes is one huge failure to scare away the "smart money".

Adam Gregorich said:
Its interesting that LB was so touchy about the financing.
Click to expand...

(This is purely speculation on my part).

I have some nodding familiarity with how funding works in a few other niches unrelated to tv/movie productions. I wouldn't be surprised if the funding system works in a simlar manner in many unrelated niches.

(This may sound weird to "paraphrase").

If Monsieur Besson is feeling insecure/touchy about the funding for Valerian, then I wouldn't be surprised at all if it's for the above ^^ reasons. (ie. A sign of desperation .... etc ...).

It could also be that the US had one of the lowest box office takes for this film (roughly $40 mil), hence his attitude.

... I don't blame him for being touchy about discussing the finances.
You must log in or register to reply here.