Two for the Seesaw Blu-ray Review

A bittersweet comedy of ill-matched souls fated to assist one another through transitions in each of their lives, Robert Wise’s Two for the Seesaw can’t do much with what is a very talky play with two sometimes irritating characters. The director gives it his all using all manner of cinematic legerdemain to keep things moving and interesting, but he’s defeated by the miscasting of two big Hollywood stars in roles ill-suited to them and a widescreen treatment of a very intimate story. 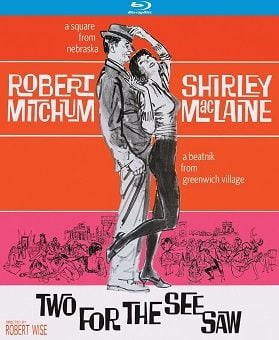 Newly separated Nebraska lawyer Jerry Ryan (Robert Mitchum) flees to New York City to lose himself in The Big Apple while he decides what he wants to do with the rest of his life. He meets kooky Gittel Mosca (Shirley MacLaine), a divorced Bronx dancer and costume designer who is used to men using her and throwing her away. Both of their guards are up as they try to inch their way into a relationship beneficial to both, but Gittel can’t let go of her insecurities that Jerry will dump her like every other man has done, and Jerry, while trying his best to fit into the Manhattan lifestyle, can’t shake memories of a calmer, more sedate and predictable life with his ex in Nebraska.

Based on a hit two-character Broadway comedy by William Gibson, Isobel Lennart’s screenplay does some minimal opening up as we see Gittel’s friends Sophie (Elisabeth Fraser) and Oscar (Eddie Firestone) who are merely talked about in the play, see some dancers in rehearsal (with a cameo from Ken Berry as a dance teacher), and have a few scenes with Jerry at his new law firm or Gittel in her loft dance studio taking us thankfully away even for a few moments from the apartments rented by Gittel and Jerry where they do all of their endless soul searching. But that doesn’t minimize the talk, talk, talk that rattles forth continuously as these two insecure adults try their best to convince each other about their true feelings and intentions. Director Robert Wise uses split screen (but much less creatively than it was used in Pillow Talk three years earlier) and lots of different camera angles (including the film’s most impressive moment as Gittel tries to choreograph a new dance routine for herself as Wise shoots her from below capturing MacLaine’s quirky dancing talent and Gittel’s mistrust and self-consciousness about her own abilities and seeming for a change more like cinema and less like photographed theater) to give some visual variety to the proceedings. But, it just doesn’t ever convince us that we’re not watching a play with characters reciting (sometimes) unconvincing dialogue to make themselves miserable instead of settling into a relationship which could be mutually beneficial to them both. Gittel’s trust issues and insecurity even as Jerry bends over backwards to be what she wants wears thin around the one hour mark, and there is still another hour to go! Widescreen also doesn't seem the smart choice with this basically two-character dramedy dwarfed by the widescreen used only a few times for those split screen effects.

Both stars despite their considerable talents are not felicitously cast. Shirley MacLaine seems about as Jewish as an Irish potato, and her attempts at a Bronx accent seesaw giddily to match the film’s title (Anne Bancroft won her first Tony Award for the role on Broadway). Stalwart Robert Mitchum is cast as the indecisive Jerry, but try as he might, his performance is never as wishy-washy as the part demands, and while the duo had a passionate off-screen affair (according to MacLaine), there are no on-screen sparks at play here. The two leads handle the copious dialogue without a problem and play with ease together, but their on-screen romance just never comes to life. Elisabeth Fraser has a couple of memorable small scenes as Gittel’s best friend Sophie, and Edmon Ryan is just fine as Jerry’s New York employer Frank Taubman.

The film’s original Panavision theatrical aspect ratio of 2.35:1 is faithfully delivered in this 1080p transfer using the AVC codec. At its best, sharpness is exceptionally good, and the grayscale includes crisp whites and rich black levels. But the image is cluttered throughout with dust specks and debris along with occasional scratches, some slight vertical banding, and reel change cues which have not been eliminated. The movie has been divided into 8 chapters.

The DTS-HD Master Audio 2.0 mono sound mix offers decent fidelity for Andre Previn’s moving, sometimes mournful background music score, and dialogue has been well recorded even if some looping after the fact is not matched well with the volume level and ambiance of the original recording. Sound effects are blended skillfully and harmoniously with the other tracks. There is some soft hiss to be heard in quieter moments, however, along with occasional pops and noise at reel changes.

Two for the Seesaw brings William Gibson’s celebrated Broadway play to the screen with much of its dialogue intact. Unfortunately, the sense of a theatrical piece never goes away, and the two stars struggle mightily with roles to which they aren’t always well suited. The Blu-ray visual and auditory quality is slightly above average.

Thank you for that review. I'm relieved to learn that I'm not the only person for whom this film simply doesn't work.


Robert Mitchum is one of my five favorite movie actors. Robert Wise is a favorite director. Yet I've never been able to enjoy this film. I'll try the DVD again in the next few days, but I'm most unlikely to buy this Blu-ray disc.

I bought the blu-ray and enjoyed watching this film again, but I agree that (despite being a big Mitchum fan) it's not one of my favorite films of his to watch.
You must log in or register to reply here.