A troubled teen gets to the bottom of his splintered family in Kasi Lemmons’ Black Nativity. An unusual and sometimes uncomfortable blend of music, melodrama, and spiritually symbolic recounting, Black Nativity seesaws giddily in merit throughout. There are Oscar winners doing some fine performing and quite a bit of emotional warbling, but the combination of dramatic singing with the occasional purple prose doesn’t always make for peaceful coexistence, and the film as a whole doesn’t quite seem worthy of its many admirable pieces. 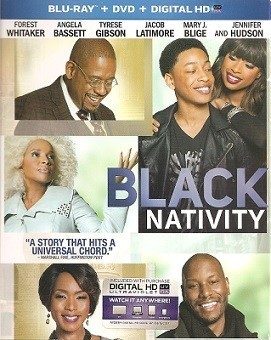 With his mother Naima (Jennifer Hudson) unable to pay bills amounting to $5,000, sixteen-year old Langston (Jacob Latimore) is sent from Baltimore to Harlem to stay with his grandparents over Christmas holidays while his mother tries to make other arrangements for them. Reverend Cornell (Forest Whitaker) and wife Aretha (Angela Bassett) Cobb are virtual strangers to Langston, and the pastor’s strict ways don’t sit well with the rebellious teenager. He also doesn’t understand the nature of the rift between his mother and her parents, but over the course of the next few days, he comes to know them better and while attending a Nativity service at his grandfather’s church, has an epiphany which makes him more determined than ever to get the kind of family he feels he deserves.This is a full blown musical with not only emotionally charged numbers for both solo artists and combinations or two or more singers (the new songs are by Raphael Saadiq and Laura Karpman) but occasional (and misbegotten) rap interludes (by Nas billed here as Nasir Jones). With powerful vocalist Jennifer Hudson taking a secondary role in the drama, director Kasi Lemmons has nevertheless worked her into the refrains of a number of songs existing in fantasy motifs (“Hush Child” which she splits with a pregnant street couple and her son) or in split-screen scenes with other actors (the most impressive being the powerful duet of the song “He/She Loves Me Still” shared with Angela Bassett and easily the movie’s best moment). Hudson also shines in the introductory “In the Meantime” and the climactic “Fix Me” in front of a church congregation, one of the film’s more unfortunately staged moments as the splintered family airs their dirty laundry and then miraculously reunites in front of a church filled with people. The Nativity scene itself as penned by Langston Hughes and occurring about two-thirds of the way through the film is treated as a dream sequence in which the characters from the familiar Bible story are enacted by peripheral characters glimpsed earlier in the movie (street tough Tyson played by Tyrese Gibson sings “Sweet Little Jesus Boy” mellowly) and topped off by Mary J. Blige’s angel singing “Follow.” It’s a bit of an anticlimax actually to the overheated melodramatic story which encircles it and practically forgotten once the long lost family gets reunited.Though only billed fourth, Jacob Latimore shoulders most of the heavy burden of the film as the anxious, increasingly irate Langston showing off a fine voice in “Sometimes I Feel Like a Motherless Child” and navigating well enough emotions that run the gamut from innocence to street punk tough. Forest Whitaker and especially Angela Bassett give genuine portrayals of grandparents whose hearts have been broken. Jennifer Hudson’s vocals are powerhouses throughout, and she holds her own in the dramatic scenes even with their sometimes overripe qualities. Even better is Tyrese Gibson as the street smart Tyson who has some surprises for the lad. Vondie Curtis-Hall has a very good scene as a local pawnbroker with some words of wisdom for the headstrong teen, and Luke James and Grace Gibson as the street couple coping with her pregnancy duet beautifully with “I’m Just a Sinner” before it segues into a four-part number with Hudson and Latimore.

The film’s 2.40:1 theatrical aspect ratio is delivered in a striking 1080p transfer using the AVC codec. Sharpness is simply superb throughout, and colors, especially the vibrant streets of New York at Christmastime we first see when Langston alights from his bus, are beautifully under control. There is also a warm glow in all of the interiors in the Harlem home, and flesh tones are completely natural throughout. Black levels are likewise excellent with exceptional detail in shadows. The film has been divided into 32 chapters.

The DTS-HD Master Audio 5.1 sound mix does a good but not particularly great job with the heavy musical content of the film. The vocalists, especially Jennifer Hudson, are quite striking with their voices emanating from the center channel and the orchestrations filling the surrounds, but the ambience of New York/Harlem isn’t always attended to with precision and seems a little underwhelming on occasion.

An earnest if not altogether effective blend of drama and music, Black Nativity does feature some impressive vocalizing and a number of solemn, well-meaning performances. The Blu-ray offers an impressive high definition visual experience with nice sound to accompany the visuals. Your own mood may determine how receptive you are to the nature of the storytelling here which sometimes borders on melodramatic overkill.