Delmer Daves’ Kings Go Forth sets up a wartime love triangle plopped right into the heart of the French Riviera during the final year of World War II. Unfortunately, neither the romantic melodrama nor the wartime action sequences amount to all that much, and the film leaves one with a feeling of inertia: we just haven’t invested enough into these characters to really care that much about their ultimate fates by the end of the movie. It’s a shame because there is a first-rate cast at work, and there is real production value here, too, but it’s pretty much wasted on a project that seems almost a dead end from the moment it begins. 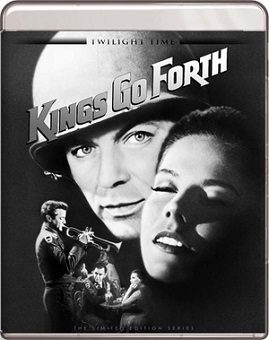 Lieutenant Sam Loggins (Frank Sinatra) leads the ground forces on a forward observation team situated in southern France in 1944. The Germans are still in the area, and it’s his unit’s job, under the command of his colonel (Karl Swenson), to let ground and air forces know of the Nazis’ whereabouts so they can be wiped out. In between the sporadic fighting, Sam gets weekend passes to Nice where he meets and falls for the gorgeous Monique Blair (Natalie Wood). She has a secret, one she thinks might interfere with their friendship, and when she meets the unit’s flashy charm boy Sergeant Britt Harris (Tony Curtis), she flips for him but fears he won’t share her feelings once he learns of her secret. Monique admits she doesn’t share Sam’s feelings but does love Britt, and Britt even after learning the secret vows to marry her, but German attacks are escalating, and it’s questionable whether either Sam or Britt will survive the end of the war.

Merle Miller’s screenplay is based on the best-selling novel by Joe David Brown, but the script has a rather off-putting laconic narrative by Sinatra, part straightforward and part cheeky and the fact that it’s present means he’s going to survive in order to tell the tale, while the film’s mise-en-scène seesaws back-and-forth between battle sequences and scenes of romantic longing and pursuit. (Who knew World War II was so accommodating to allow continual weekend passes for Allied soldiers over the course of months? The Germans must take each weekend off to rest up for the week ahead.) But the battle scenes are rather patchy and not sustained well (quick action with goals achieved rather simply even if these scenes are handled quite adroitly by director Delmer Daves) while the romantic scenes describe feelings rather than showing them (we never see real development in the romance between Britt and Monique, so that when he springs his bombshell, the result is seriously muted). The secret that seems to be so major might have been shocking to 1950s audiences (in the trailer, Sinatra makes much of its impact), but it doesn’t get the discussion or development that would truly make it a secret worth guarding. Like everything else in the movie (the battle scenes, the romances), the lack of a driving narrative dealing with the conflicts and resolutions never allows the movie to progress beyond the mediocre.

With such underdeveloped roles, it’s not surprising that the three above-the-title stars don’t get to really sink their teeth into their parts. Frank Sinatra gives a decent performance, and one gets the sense late in the game that he means what he says once he and Curtis have a falling out. Tony Curtis is all charming façade with little behind the gleaming teeth and head full of hair (though he does an okay job miming playing a trumpet ghosted on the soundtrack by Pete Candoli). Natalie Wood makes an honest if only sporadically successful stab at a French accent (she’s playing an American who has been brought up in France and considers it her home), but as they always did, it's her eyes that are the keys to her communication lighting up in the throes of first love and sinking in misery once things go south. Karl Swenson has an effective scene or two as he deals with the loneliness of separation from loved ones while Leora Dana as Mrs. Blair is subdued and knowing as the kindly mother who knows the best man for her daughter but who can’t impose her will on her child.

The film’s original theatrical 1.85:1 aspect ratio is faithfully rendered in this 1080p transfer using the AVC codec. Sharpness is excellent throughout as one sees details in rock walls, tree bark, and naturally in facial features, hair, and clothes. The grayscale is quite impressive with outstanding black levels giving real depth to the image. Contrast has also been consistently maintained. There are wayward specks of dust which dot the picture here and there, but it’s otherwise an admirable transfer. The movie has been divided into 24 chapters.

The DTS-HD Master Audio 1.0 sound mix does a fine job uniting the well-recorded dialogue (though post dubbing for some of the French actors is rather obvious), the Elmer Bernstein score, and the sound effects into a single entity. But age-related artifacts like some soft hiss in quiet moments and some rather noticeable muted crackle on several occasions do occasionally disrupt one’s concentration on the movie.

Six-Page Enclosed Booklet: contains an excellent selection of black and white stills, original poster art on the back cover, and film historian Julie Kirgo’s generous analysis of the movie.

Kings Go Forth offers professional performances and more than decent production values in the service of a rather basic romantic love triangle set during World War II. There are only 3,000 copies of this Blu-ray available. Those interested should go to www.screenarchives.com to see if product is still in stock. Information about the movie can also be found via their website at www.twilighttimemovies.com or via Facebook at www.facebook.com/twilighttimemovies.

Thanks for the insightful review Matt. If I'm correct, this was only released panned-and-scanned on VHS, Laserdisc and SD. Very keen to have another Natalie Wood title on blu ray in my collection. Love the score too. Wood and Bernstein offer great compensation for an otherwise average studio movie of the '50's.


I haven't seen this film for at least twenty-five years and I didn't buy the DVD because it was in the wrong aspect ratio. I remember the film as being dramatically a bit weak and limp, but I've always enjoyed Kings Go Forth. Despite Matt's review, which I'll probably agree with when I've seen the film again, I'm going to buy this disc.


At the time of Kings Go Forth Frank Sinatra released a "single" called Monique.