A patchwork quilt of stories featuring men on both sides of World War II and their lady loves, Edward Dmytryk’s The Young Lions is an absorbing if overlong period melodrama. With two of the greatest actors ever to appear in films in their only joint screen appearance (though they share only one sequence and then don’t really interact), The Young Lions engages the viewer through the towering personalities of its actors though the back-and-forth nature of the storytelling juggling three main storylines trying to intersect in some way may prove frustrating for those who would want more development in one story before jumping into another. 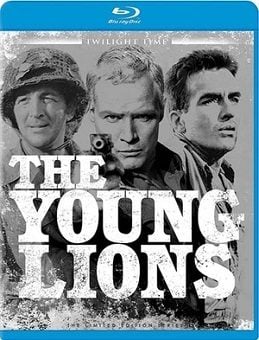 The three soldiers dealt with in the film all share ambivalent attitudes about their World War II service requirements. Bavarian Marlon Brando’s Lt. Christian Diestl sees his idealistic views of the Nazi party dashed as war experiences reveal to him the underlying viciousness and inhumanity of what his people are fighting for. Jewish Noah Ackerman played by Montgomery Clift has just met, fallen in love with, and married Hope Plowman (Hope Lange), so he’s not eager to leave his young wife so soon after their marriage (and even more conflicted when he finds during his first five months as a stateside soldier bullied by his gentile fellow soldiers that she’s pregnant). Entertainer Michael Whiteacre (Dean Martin) is just about to open a Broadway show and has no desire to leave the high life for an Army barracks, hoping some connections he has in Washington can either get him a deferral or a cushy Special Forces assignment.

Irwin Shaw’s mammoth novel has been boiled down to basics by screenwriter Edward Anhalt losing some focus on characters in the process and seemingly placing more attention on Brando’s Diestl (admittedly, the most interesting character of the trio) and less on Martin’s Whiteacre (also true he’s the least interesting and less well defined either on the page or in the performance). While there are some World War II action sequences scattered throughout (the North Africa scenes especially resonate, are well directed by Edward Dmytryk and quite engrossing), the film is frankly more of a talky character piece as we see what makes these men tick and get to know their women in sometimes stark and sometimes flat scenes that don’t always ring true. For instance, while Diestl is posted in Paris after its fall, he meets a young French widow Françoise (Liliane Montevecchi) who initially despises his ilk and yet within a few minutes has completely given herself to him. Likewise Barbara Rush as a socialite blows hot and cold on American (and especially Martin’s) involvement in the war and never makes a clear case for what she believes other than being against Hitler’s craving for world domination (revealed in a spritely opening sequence with her and Brando at their most effervescent).

Marlon Brando conveys well the underlying deterioration of his ideals as he’s asked to witness and participate in wartime activities that he abhors. His character’s reputation as a notorious womanizer comes into play in his interactions with his captain’s (Maximilian Schell) wife played stunningly by May Britt, a tigress who’s decidedly not sitting home knitting by the fire while her husband is out fighting a war. Schell is likewise captivating as the hardline Nazi soldier, obeying orders almost to the end. Montgomery Clift, still obviously suffering from the effects of the debilitating accident which occurred during his previous film Raintree County, seems fragile enough for a strong wind to crack, and while he’s appealing in an innocent and helpless way, one finds it difficult to fully invest in him as this character, and the actor’s fragility makes it hard for him to sometimes focus deeply on what’s happening around him. Dean Martin’s performance is hindered by poor writing which doesn’t allow him to have a clear stance on how he feels about participating in the war when his heart (and definitely his courage) aren’t sufficient for the job at hand (and yet he musters both of them by film’s end). Hope Lange gives her usual lovely, willowy performance as the young wife left behind when war beckons her husband. In smaller roles, Parley Baer is affability itself as the German photographer Sgt. Brandt while Lee Van Cleef and Herbert Rudley are memorable as hissable, bullying officers who have it out for Clift’s Ackerman. Arthur Franz makes a solid impression as their polar opposite: an officer with both heart and common sense.

The film’s original theatrical Cinemascope aspect ratio of 2.35:1 is faithfully rendered in this 1080p transfer using the AVC codec. This is a superlative transfer with outstanding sharpness and a gorgeous grayscale which complements the Oscar-nominated cinematography by Joe MacDonald. Contrast has been expertly applied for a consistently fine viewing experience, and no age-related artifacts mar the exceptional picture quality. The movie has been divided into 24 chapters.

The original Oscar-nominated sound mix has been brought to Blu-ray in a DTS-HD Master Audio 5.1 presentation. There is some directionalized dialogue though most of it is contained in the center channel. Only some sporadic sound spillover into the surround channels occurs with most of the Oscar-nominated Hugo Friedhofer score and sound effects getting their greatest focus in the front soundstage. Any age-related problems with hiss, pops, crackle, or flutter have been completely eliminated.

Audio Commentary: producer Nick Redman, screenwriter Lem Dobbs, and film historian Julie Kirgo have a spirited discussion on all aspects of the film and its source novel. It’s a must listen as they point out the positives and negatives of the film at hand.

Six-Page Booklet: contains an intriguing selection of black and white stills, original poster art on the back cover, and film historian Julie Kirgo’s always interesting analysis of the movie.

The Young Lions gives us courtesy of Twilight Time another of Fox’s impressive Cinemascope features from the 1950s in a sparkling high definition disc. There are only 3,000 copies of this Blu-ray available. Those interested should go to www.screenarchives.com to see if product is still in stock. Information about the movie can also be found via Facebook at www.facebook.com/twilighttimemovies.

The novel is a fascinating read. The film pretty much follows it except for the "happy" ending. I guess the original ending was far too nihilistic. Too bad, because it is so powerful.

Thanks, Matt. Those 5/5 numbers are what I was hoping for this fabulous film. I haven't read the book, but I can imagine it was hurt, not only by Brando's interpretation of his character, but by the necessity to condense it. This is where your mini-series comes into its own.

As for Francoise's change of 'heart', it's not impossible (even if improbable given her circumstances), to imagine a woman falling for someone who, "Looked like a God", as David Lean described the actor after a viewing.

Thanks Matt! I was on the fence with this, but now it is on my must order list along with several titles being released by TT in August.


Thanks again for another excellent review!

I´ll buy this one... Twilight Time uses 20th Century negatives and they almost never disappoint... I think 20th Century beats Warner Brothers in their catalog efforts and I love Twilight Time for releasing those oldies that would otherwise stay hidden or whatever... They release wonderful titles, I can hardly wait for House Of Bamboo in August (I think). I dont mind paying $40 for a GREAT Blu-ray transfer, rather than $10 for some mediocre shit...

Nice review. I only have a few Twilight Time Blu's this one, Zulu, Journey to the Center of the Earth, Man from Laramie, Experiment in Terror and Khartoum. This is the first one that I agree looks stunning and worthy of the hype. A big improvement over the DVD.

The others I have I felt didn't live up to the high praise they received and were only small upgrades over the DVD. Well Experiment in Terror was pretty nice probably 2 steps up from the DVD.

Randy Korstick said:
Nice review. I only have a few Twilight Time Blu's this one, Zulu, Journey to the Center of the Earth, Man from Laramie, Experiment in Terror and Khartoum. This is the first one that I agree looks stunning and worthy of the hype. A big improvement over the DVD.

The others I have I felt didn't live up to the high praise they received and were only small upgrades over the DVD. Well Experiment in Terror was pretty nice probably 2 steps up from the DVD.

Khartoum is a huge improvement on the DVD. I'm surprised you don't agree. The Man From Laramie is also a substantial upgrade, although not to the same extent.

...what a magnificent production!...it moved me to tears...the musical score (oscar nominated) is superb and comes through with a wonderful soundtrack..the theme for Montgomery Clift and Hope Lange tugs at your heart and is used as the climax of the movie...great work!


...i would take issue regarding Monty Clift's limited performance due to his horrific accident while shooting "Raintree County"...yes, he physically is thinner than before, and, yes, he is no longer the good looking "Hollywood Star" of "A Place in the Sun"...but! he is brillant in this role; his look and physical actions aside from his acting fit the period, time and place of a Jewish person that would look like him; his emotions are clearly visible in his body language as well as his speech...an introverted man who is so terribly shy but has the great fortune of meeting Hope Lange who becomes his life long partner. Hugo Friedhoffer (sorry for the misspelling) extends to this individual and his wife the most tenderest of music.


...sorry for writing so much, but, after watching "The Young Lions" the other night, I had a hard time choosing another film to screen for a few days.