Born Free is an astonishing, unforgettable, and remarkably realistic look at the lives of a married couple in Kenya who decide to adopt a lion cub whose mother has died. This might sound like the recipe for a shameless, treacly and overly sentimental tear jerker, but in fact it has many moments of high drama and does not underestimate the intelligence of its audience. It is now available on Blu-ray from Twilight Time with an outstanding transfer from Sony and an isolated track of John Barry's Academy Award-winning score. 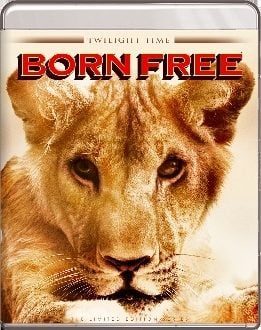 She was born free and she has the right to live free. - Joy Adamson

George Adamson (Bill Travers), a British gamekeeper, and her naturalist wife Joy (Virginia McKenna) live in the British protectorate of Kenya in the 1950s. George leads a hunting party that has been tasked with the job of killing a lion which has mauled Kenyans. After that lion is tracked down and disposed of, George is attacked by another lion, which also is killed. Unbeknownst to George, the second lion is not a man-eater but a mother who is protecting her cubs. George returns home with the cubs, with the idea of raising them until they can be weaned and given to a zoo.

Joy takes an immediate liking to the runt of the litter, who is given the name "Elsa" - the name of an undersized schoolmate Joy had when she was young. Initially it appears that none of the cubs will survive because they refuse to eat the formula which is given to them. George continues to experiment with different formulas until he finally hits upon a recipe which closely resembles the milk which a lioness would produce. The cubs then grow and prosper, although Elsa requires extra attention because her siblings push her around and try to steal her food. At this stage of their lives the cubs act much like domesticated cats, wrestling with one another and cuddling up with George and Joy. However, the day when they will be too large to handle is fast approaching. George has resigned himself to the inevitable, but Joy cannot bear the thought of Elsa spending the rest of her life in a cage.

Bill Travers and Virginia McKenna, who were husband and wife in real life, are perfectly cast as George and Joy. Their interactions with the various lions which play Elsa are so realistic that I wish that a "making of" featurette were available. While Born Free is a family friendly film, it is rated PG for a reason - scenes of lions hunting and eating their prey are honest depictions but may be disturbing to very young children.

Born Free is directed by James Hill (Black Beauty, A Study in Terror), whose work garnered him a nomination for Outstanding Directorial Achievement in Motion Pictures by the Directors Guild of America. The film also was nominated for three Golden Globes awards and took home the Academy Awards for Best Original Score and Best Song. The excellent screenplay is credited to "Gerald L.C. Copley," a pseudonym used by Lester Cole (Objective, Burma!), one of the Hollywood Ten who had been blacklisted by Hollywood in the fifties.

This is a typically boring (i.e., flawless) Blu-ray transfer from Sony. The 1080p image is properly framed at 2.35:1. The outstanding cinematography by Kenneth Talbot features gorgeous vistas of Africa and exceptional shots of lions, zebras, elephants, and other wild animals. The image is consistently sharp and devoid of dirt, scratches, or other age-related anomalies.

Readers are encouraged to peruse the comments by our resident expert, Robert A. Harris.

The English mono 1.0 DTS HD-MA soundtrack also is superlative, in spite of the inherent limitations of the source material. As Mr. Harris notes, John Barry's score bears some similarities to the score for Lawrence of Arabia (compare the first two notes of the theme to Born Free to the first two notes of the theme to Lawrence), which means that it is majestic. The recording of the theme song was made by the British singer Matt Monro, who had previously sung Barry's theme song to the James Bond film From Russia, With Love. An instrumental version by pianist Roger Williams was a Top Ten hit in 1966, and the tune was covered by such diverse artists as Andy Williams, Frank Sinatra, Duane Eddy, Hank Marvin, and even the Mormon Tabernacle Choir.

Every word of dialogue is clear and understandable, and English SDH subtitles are an available option.

Julie also contributes a thoughtful essay in the enclosed color booklet. She goes into some detail about the real-life Adamsons and what ultimately became of Elsa, so I strongly recommend watching the film before reading the essay.

The other extra is the film's original theatrical trailer.

Born Free is an engrossing film adaptation of Joy Adamson's best-selling book about the challenges and rewards she and her husband experienced while raising a lion cub and wrestling about what to do with her after she matured. The story will tug at your heart without insulting your intelligence, and it is not a film which you will soon forget.

Readers interested in purchasing it can find it that the Twilight Time website or the Screen Archives website. It has been released in a limited edition of 3,000 copies.