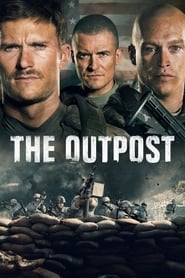 
Tagline: The mission was survival.

Plot: A small unit of U.S. soldiers, alone at the remote Combat Outpost Keating, located deep in the valley of three mountains in Afghanistan, battles to defend against an overwhelming force of Taliban fighters in a coordinated attack. The Battle of Kamdesh, as it was known, was the bloodiest American engagement of the Afghan War in 2009 and Bravo Troop 3-61 CAV became one of the most decorated units of the 19-year conflict.
Right from the opening crawl, Rod Lurie warns viewers that THE OUTPOST is not going to be an easy ride. Based on a 2009 Taliban attack on an American base in northern Afghanistan, the movie plunges us right into the action with a troop of U.S. soldiers who get the shortest of straws as their encampment is in the valley with steep mountains surrounding them. They are literal sitting ducks. Lurie and his writers (it's based on a Jake Tapper book) do their damnedest to hew close to the facts, which also means trying to identify and distinguish a large cast of characters. On screen title cards accompany the appearance of each man and location, but, it's still very difficult to ID each person once the action gets into gear save for a few main principals (the constant title cards also gets a bit wearisome after a while and actually impedes the proceedings).

Fortunately, Lurie makes the wise decision to not go for an individualized portrait of the men, but, more of a collective one. It's about the troop's actions, not individual ones - although, several acts of bravery are vividly detailed. What really distinguishes the movie is the central battle sequence. Expertly choreographed by West Point graduate Lurie, and edited with precision, the viewer is barraged by the chaotic battle, but, crucially, still able to keep one's bearings. It's a master-class in how to shoot a war scene.

THE OUTPOST is a tough, brutal enterprise. One may miss a better sense of who each individual is, but, it's the totality of the experience is hard to shake.

Tino said:
This might help in adding movie info.

I've tried, but, it never seems to work. Hopefully and admin can figure it out and fix it

Saw this few weeks ago. I thought it was ok. I wasn't particularly impressed. Scott Eastwood means B movie.
J

SamT said:
Saw this few weeks ago. I thought it was ok. I wasn't particularly impressed. Scott Eastwood means B movie.
Click to expand...

I read the plot and instantly thought of Zulu.
J

Keith Cobby said:
I read the plot and instantly thought of Zulu.
Click to expand...

It's a true story. Inspired by real events -- Interesting though the parallel may be with Zulu.
Last edited: Mar 6, 2021

I went to the cinema to see this a few months ago and walked out after an hour. I just wasn't getting into it and it was also making me feel nauseous watching it.

I liked 12 Strong, but this just wasn't as compelling a watch for me.
Movie information in first post provided by The Movie Database
You must log in or register to reply here.