This movie arrived like gangbusters in 1970, a year after A MAN CALLED HORSE had begun to make a change to our perceptions of Native Americans. Suddenly, Hollywood, in an effort to make parallels to the then-current Vietnam War, started to depict "Indians" as three-dimensional humans who inhabited hundreds of tribes with quite specific cultures. They were shown interacting with their families and engaging in activities that even White Man could identify with. Rather than always being the aggressive savages who were known for taking scalps (an unfortunate behavior they did not invent, but rather copied from white men), movies began to humanize them and show them as mostly being the victims of Manifest Destiny and simple greed. The truth is probably somewhere in the middle, but it was great to see this reversal of stereotypes and largely bogus "history".

SOLDIER BLUE was released the same year as the Dustin Hoffman masterpiece LITTLE BIG MAN and suffers accordingly by comparison, but remains a powerful if highly-flawed film in its own right. It actually opens with an attack by a tribe of Colorado Cheyenne on a passing Cavalry attachment circa 1864. This does not immediately establish the attackers in a sympathetic light, until the reason for the massacre is later explained. Riding with the troops was Cresta Lee (Candice Bergen), who had spent two years living among the Cheyenne and who understood their plight. She and a rather slow-witted Cavalry officer, Honus (Peter Strauss) are the sole survivors of this bloody engagement, and now have to travel on foot toward the safety of a an Army outpost some distance away.

Honus has no sympathy for the Indians. He, like most white men of his day, does not perceive his universe as anything but following orders and pushing further into territory that needs to be taken and defended, removing all obstacles (mostly Natives) that threaten westward expansion. Cresta wants to protect the people she came to know and admire. This causes constant conflict between them, although it is obvious they are attracted to one another.

The film's lengthy middle portion is its weakest. The characters are shallow and dull. The silly dialog given to the actors on route to the protection of the fort is not handled well by either of the leads, and the movie threatens to sink completely into soap opera and bad comedy. But, in its final half-hour, SOLDIER BLUE does a massive turnaround and takes us deep into the heart of darkness. In history, a Cavalry Colonel named John Chivington (oddly renamed Iverson for the film) led his soldiers against a sleeping Cheyenne and Arapaho village at Sandy Creek, where the natives had been guaranteed government protection. The small village became a killing field in short order, with women nor children spared (Chivington was notoriously reported to have answered a question posed by a soldier about whether or not they were meant to kill the children, to which he said, "Nits make lice"). This is where the real power, but also the strong controversy, of the film lies. It is also a sequence not included in the novel upon which the rest of the film was based, Theodore V. Olsen's Arrow In the Sun.

SOLDIER BLUE is not an easy film to view during the final sequence. When I left the theater, I was out of breath and unable to speak for hours. Director Ralph Nelson obviously wanted to pull no punches, and had an agenda that seems in retrospect an attempt at the personal exorcism of the cultural guilt Americans have shouldered from their massacres of actual Natives before and after the Civil War, and also in Vietnam (specifically the My Lai massacre). There were individual shots during this finale that were genuinely shocking, unlike any movie violence seen up to then (and I include THE WILD BUNCH). The acts of a revved-up, hysterical Cavalry, hooting and hollering as they dismember children and cut the breasts off the squaws, as the Maltin Movie Guide suggests, "remain almost unwatchable" (his book only assigns a 1 1/2 star rating...I would give it 3). Yes, it's horrifying, but I have little doubt that, in reality, even worse things occurred.

1970 was a year of serious citizen outrage over the needless deaths in Nam of so many young men, sent to battle by armchair warriors in positions of power. The Kent State College killings of four protesting students by trigger-happy Ohio National Guard was the last straw for the youth of America. I was attending Rochester Institute Of Technology then, and students nationwide held a moratorium at their schools in order to march. I walked from RIT to the University Of Rochester in ardent support of the protest, but grew disenchanted with the group we eventually ran into, the SDS (Students for a Democratic Society), who were hell-bent on causing physical mischief, which seemed to me to be counterproductive.

This was the atmosphere in which I saw SOLDIER BLUE at a local theater. When it became available on VHS in the early 80's, I snatched it up, but what I got seemed awfully tame compared to what I remembered seeing theatrically. Of course, I was right -- the film had been recut to allow it a PG rating rather than its original "R." Numerous incarnations of the film on video have appeared, but all are the edited versions. Until, that is, the German release emerged on Blu-ray. 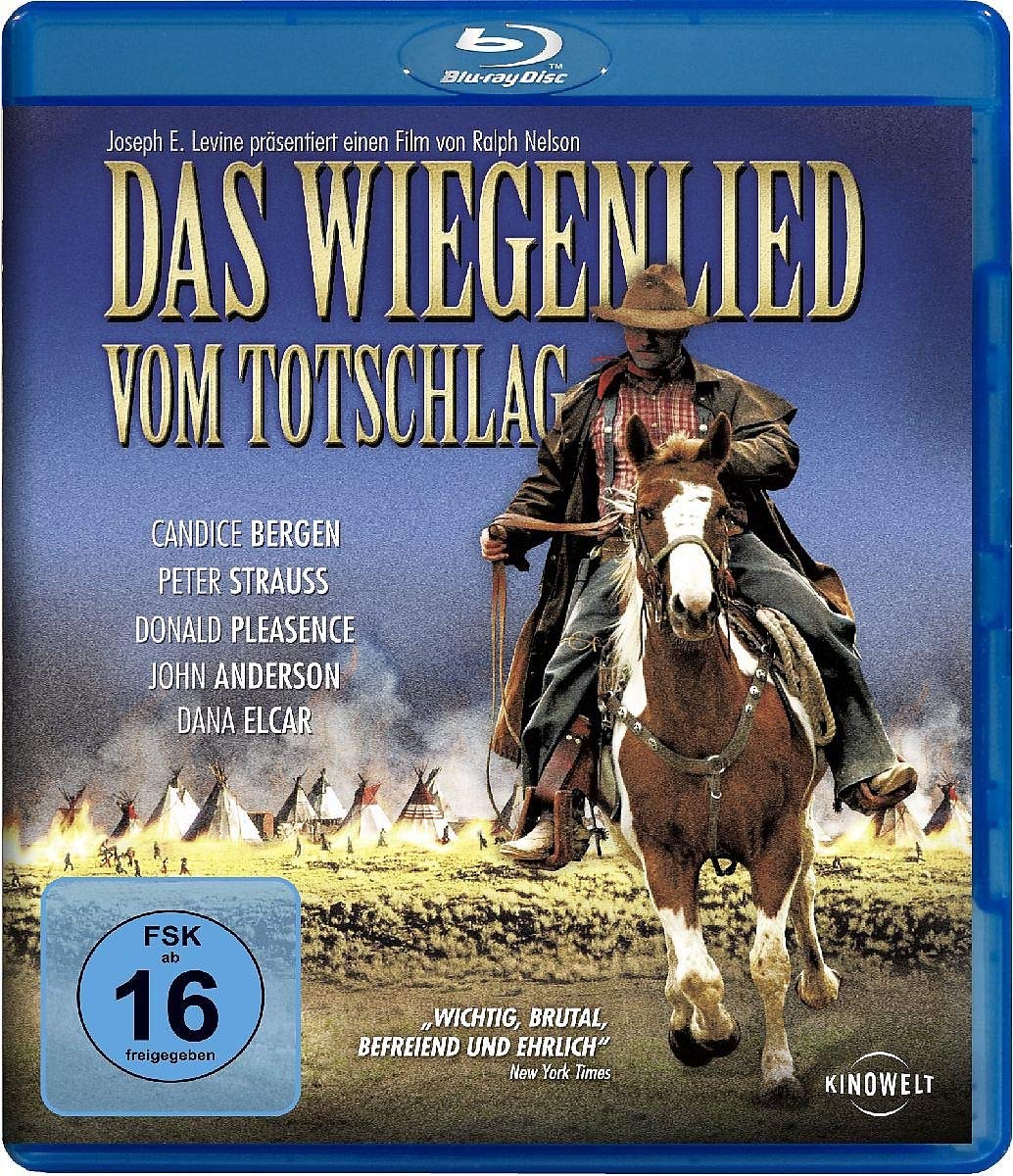 Kinowelt's release is not perfect, but it is quite good. The 2.35:1 ratio and the full 112-minute, unedited running time are preserved. The color is nice, it is sharp, and you have film grain. The sound is serviceable mono. Only a trailer is included as an extra. MY copy defaults to German language, but that is easily fixed to offer English.

If you have a strong stomach and an historian's curiosity about how this dark period in our past has been depicted on film, I highly recommend it.

Would make a nice Kino release

An alternate view of Soldier Blue by the late Roger Ebert:

Why, its ads asked, does Soldier Blue show, "in the most graphic way possible, the rape and savage slaughter of American Indians by American soldiers?" Because it's true, the ads replied, and "now more than ever is the time for truth."

Now more than ever is also the time for violence in movies, a point that hasn't been lost on the makers of Soldier Blue. Soldier Blue is indeed savage, but it wears its clock of "truth" self-consciously. It is supposed to be a pro-Indian movie, and at the end the camera tells us the story was true, more or less, and that the Army chief of staff himself called the massacre shown in the film one of the most shameful moments in American history. So it was, and of course we're supposed to make the connection with My Lai and take Soldier Blue as an allegory for Vietnam.

But that just won't do. The film is too mixed up to qualify as a serious allegory about anything. And although it is pro-Indian, it is also white chauvinist. Like A Man Called Horse another so-called pro-Indian film, it doesn't have the courage to be about real Indians. The hero in these films somehow has a way of turning out to be white.

In "A Man Called Horse," Richard Harris was your average English aristocrat, but damned if he couldn't out-hunt, out-fight, out-shoot and out-lead all those Sioux, who made him their chief out of pure gratitude. And now in "Soldier Blue," Candice Bergen is the white girl from New York who "understands" Indians and makes liberal speeches and goes back to warn the tribe when the Cavalry is coming. Nobody who looks authentically Indian gets very close to the camera.

Anyway, "Soldier Blue" is about how Candice Bergen and Peter Strauss survive an Indian massacre and try to walk overland to Fort Reunion. They have the usual adventures along the way; the movie is similar in form to Two Mules For Sister Sara, The African Queen or any of those movies where a man and woman have to team up to face the wilderness (and fall in love). Miss Bergen's dialogue is so fashionably contemporary that it sounds funny coming from a character who presumably lived 100 years ago. Strauss is unconvincing as the soldier; he keeps making mistakes and getting set straight, like those emasculated husbands in TV situation comedies.

After a sufficient number of adventures, separated by a sufficient number of "significant" speeches by Miss Bergen, the couple get back to camp and a second story begins. It's about the massacre, and the massacre is such a bloody business that the movie simply can't support it. So we sit there embarrassed at the clumsy way director Ralph Nelson reaches for significance. Nelson is an awfully good director when he's on (Tick...Tick...Tick, Lilies Of The Field, Charly). This time he's way off.

I made a point of not seeing Soldier Blue when it first came out because of the violence described Dick. I've often wondered if I should watch the film at least once, partly because, like Thomas, I think Ralph Nelson can be a good director. (I particularly like The Wilby Conspiracy) However Dick has reminded me that this film is really not my kind of movie, so I will not be making that special effort.

Roger Ebert's assessment is fair. I simply hold the film up a bit higher because it absolutely gob-smacked me, and along with two or three other films of its time, elevated my interest in Native Americans and their plight. Horrifying as it is, the violence in it was more sickening because I was learning even worse things actually happened than because what I was watching was gory and grotesque.

I returned to college to take more courses about eight years ago, and for a term paper traveled north to a Penobscot reservation, which I had visited some thirty years earlier. My first visit, in the 70's, had also been motivated by the films I had seen. The reservation was all squalor. Broken-down shacks with tin roofs, roads of mud, and what I perceived to be a general sense of hopelessness among the residents. By the time of my term paper, though, the tribe had won a fairly lucrative lawsuit against the government and was able to completely rebuild the island, including a new school and rec center, etc. But, when you come right down to it, this is still a reservation, not open plains and buffalo hunting and tremendous cultural pride.
You must log in or register to reply here.