After conquering television with the Emmy Award-winning variety series The Muppet Show, it made complete sense for Jim Henson to take his lovable puppet characters to the movies, and the result was The Muppet Movie, a bubbly and quite delightful musical comedy featuring the stars of the series in an origin road story of their first meetings and eventual coming together to form a troupe. With a gaggle of star cameos and a bracing music score, The Muppet Movie is the first and best of a long line of Muppet features. 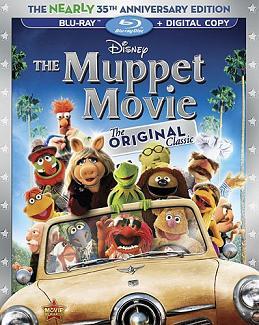 When a Hollywood agent (Dom DeLuise) discovers Kermit the Frog (Jim Henson) sitting on a log crooning in the middle of a swamp, he suggests he might want to try plying his trade in Hollywood showing him an ad for frog auditions at the World Wide Studios. Hopping on his bicycle, Kermit soon meets the untalented comic bear Fozzie (Frank Oz) trying to make a rough bar crowd laugh, and soon the two are off to Hollywood. Along the way they meet up with and are joined by Dr. Teeth (Jim Henson) and his band the Electric Mayhem, beauty pageant winner Miss Piggy (Frank Oz), and the weird Gonzo the Great (Dave Goelz). But it’s not smooth sailing out to the West Coast. Kermit is being stalked by Doc Hopper (Charles Durning), an entrepreneurial restaurateur who specializes in fried frog legs. He wants Kermit to become the new spokesperson for his franchise, but Kermit wants no part in representing any enterprise that makes cripples of his kindred.Writers Jerry Juhl and Jack Burns have taken the same mix of endearing personalities, goofy jokes, outrageous puns, and witty banter that made the television series such a hit and have brought it all to the screen in the form of a road movie. But the primary joy of the film over the TV show is the clever way that the Muppets in the film occupy real space in the real world (not just in their own theater) and are shown marvelously by director James Frawley in full figure. Marvels like Kermit peddling his own bicycle, tapping on the stage with Fozzie, or having a showdown with Doc Hopper western style on the streets of a ghost town never lose their visual appeal, and the rods that make their arms move are now gone, too, adding further to the eerie feeling of the Muppets being a genuine part of the real world.The song score by Paul Williams and Kenny Ascher is wonderful topped by the Oscar-nominated “The Rainbow Connection” which became a sort of unofficial anthem for the Muppets in the years afterward. “Movin’ Right Along” is a bouncy road theme that Kermit and Fozzie sing in a montage that takes them across country on their trek west, and Miss Piggy, of course, is given a solo with “Never Before and Never Again” as she fantasizes about her courtship and marriage to Kermit. Gonzo gets a sweet ballad, too: “I’m Gonna Go Back There Some Day” while the Electric Mayhem does their thing with “Can You Picture That,” and Rowlf gets a moment in the spotlight with “I Hope Something Better Comes Along.”The Muppet masters work overtime on the feature with each of the main puppeteers manipulating multiple characters and miraculously making each one a distinct personality. Jim Henson, Frank Oz, Richard Hunt, Dave Goelz, and Jerry Nelson each deserve the highest praise for their remarkable accomplishments. As for the cameo performers, Steve Martin has perhaps the funniest bits as a sarcastic waiter, and one wishes Madeline Kahn had been given more to do as a bar patron. Also turning up in brief bits throughout the film are Edgar Bergen and Charlie McCarthy, Milton Berle, Mel Brooks, James Coburn, Dom DeLuise, Elliott Gould, Bob Hope, Carol Kane, Cloris Leachman, Richard Pryor, Telly Savalas, Orson Welles and Paul Williams. Charles Durning has some funny moments as the Muppets’ adversary, and Austin Pendleton as his toady (appropriate to the man serving the king of frog legs) is likewise amusing.

The film’s theatrical 1.85:1 aspect ratio is faithfully rendered in this 1080p transfer using the AVC codec. Color is the transfer’s most appealing trait as it’s handled nicely without ever becoming out of control. Flesh tones for the human characters are quite believable. Sharpness is a sometimes thing with the transfer. Some segments like Miss Piggy’s fantasy song are naturally presented in soft focus, but other moments like the tracking through the swamp that opens the movie aren’t always as precise as one would expect, and details in the images are not as prominent as in the best high definition transfers. The film has been divided into 12 chapters.

The DTS-HD Master Audio 5.1 sound mix does not make the optimal use of the entire soundstage. While there are occasional musical echoes in the rears and some split effects echo there, too, most of the primary sound efforts can be found in the front channels where there is decent fidelity with the music and sound effects. Dialogue is always easily discernible and has been rooted to the center channel. The mix is not very strong in bass extensions, however.

Frog-E-Oke Sing Along (HD): the soundtrack tunes and on-screen lyrics are provided for three of the movie’s songs: “The Rainbow Connection,” “Movin’ Right Along,” and “Can You Picture That?”Jim Frawley’s Extended Camera Test (17:53, HD): director James Frawley shoots home movie footage of Jim Henson (as Kermit) and Frank Oz (alternately as Fozzie and Miss Piggy) ad-libbing in the woods and meadows as their characters. Shot on the fly, occasionally the performers get in the shot or the bottom parts of the puppets are seen.Doc Hopper’s Commercial (1:03, HD): the entire footage of Charles Durning as Doc Hopper’s commercial for frog legs.Original Trailers (HD): the teaser trailer (1:25) and theatrical trailer (4:21) are offered.Pepe Profiles Presents Kermit – A Frog’s Life (6:34, SD): on the occasion of Kermit’s 50th anniversary, crustacean Pepe interviews Kermit at the premiere of The Muppet Wizard of Oz.Disney Intermission (HD): when the movie is paused, the three karaoke numbers mentioned above play until the movie is resumed. This feature can be turned off.Promo Trailers (HD): The Little Mermaid, Heroes United, Mary Poppins, The Many Adventures of Winnie the PoohDigital Copy: the code for the digital copy is enclosed in the case.

The first and for many the best of their features, The Muppet Movie is a wonderful family film which presents the lovable felt creations in a road movie of their very own. While the sound and picture are certainly above average, this is not the pristine home video experience one would expect, and nothing special has been done in the way of bonus material for this fine movie.

Thank you for the review! I am looking forward to picking this one up.

I hope the Great Muppet Caper is in the works for a blu ray release.

maybe in 2014 with the new Muppet film sequel?

Sounds like an adequate transfer -- not stunning, but acceptable.

I am awaiting the arrival of this disc. Look forward to watching this
gem again.

Miss Piggy got the soft-focus lens? Just like all the actresses of the 1960s who demanded it to look good in their close ups? How funny!

I hope Disney resisted turning up the DNR knob on this. I remember film grain in older incarnations of this movie.

Nice that they finally got the screen test footage that was on the original Columbia Tri Star DVD release. Too bad they couldn't include the original audio mix. Not like there wasn't room?

SilverWook said:
I hope Disney resisted turning up the DNR knob on this. I remember film grain in older incarnations of this movie.

Nice that they finally got the screen test footage that was on the original Columbia Tri Star DVD release. Too bad they couldn't include the original audio mix. Not like there wasn't room?
Click to expand...

You'll notice the grain. It has not been removed.

What a relief! Thanks, Matt.

If you're a fan of The Muppet Movie, I highly recommend checking out the documentary "Paul Williams: Still Alive". It's great.

I just got this. I have to point out that the "Intermission" feature is incredibly annoying. I got a phone call while watching so I paused the movie and picked up the phone. Suddenly muppets start screaming on the screen while I'm trying to listen on the phone. I hope I can figure out how to disable that feature. I switched over to the included VUDU copy to finish watching the movie.

It can be disabled. I think it's in the set-up menu.

Have to say this one didn't satisfy me at all. Soft focus (apart from Piggy's fantasy which should be) was my biggest complaint and on a large projected surface the grain is inconsistently rendered at best. It goes from heavy to light to practically non-existent from shot to shot, very jarring to say the least.

Some of the movie does, in fact, look stunning. But at least two thirds doesn't seem to recreate faithfully what I remember as a kid. Okay, granted. Those impression may be tainted, both by memory and the inexperience of a child to appreciate the finer details of movie art at a very young age - ergo - anything looks good and going to the movie itself was just a fun exercise recalled.

But under scrutiny this disc doesn't rate a '4' for sure! It's somewhere between a 2.5 and a 3 and a very marginal 3 at best.
You must log in or register to reply here.