With the moderate success of reestablishing their brand with The Muppets, a sequel was unavoidable (there’s even an introductory song in the movie extolling its inevitability), and Muppets Most Wanted fits the bill. Like its predecessor, the film makes for a fun if not completely memorable time at the movies. There are some new, not unappealing songs and a couple of production numbers with a mix of Muppets and humans taking part, but the movie for all its pleasant insouciance just isn’t as clever or as funny or as involving as the Muppet films were in their prime. The right formula for them in the new century just hasn’t been found yet. 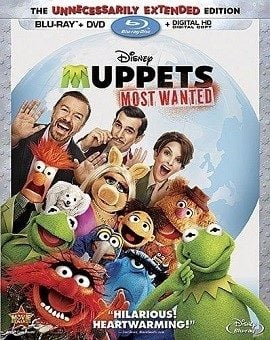 keep case in the slipcover

Arch frog criminal Constantine (Matt Vogel) has a master plan to steal the Crown Jewels of England, but it involves switching places with the guileless Kermit the Frog (Steve Whitmire) who’s trying to map out the perfect strategy for keeping the Muppets in the forefront of show business now that they’ve been reestablished. He gets talked into a world tour for the Muppets by Dominic Badguy (Ricky Gervais) not realizing that Dominic is the number two man in Constantine’s gang of crooks. Kermit is kidnapped and thrown into a Siberian gulag overseen by the martinet Madya (Tina Fey) while Constantine takes his place arranging for successful shows in Berlin, Madrid, and Dublin (gathering clues for his upcoming theft) before heading to London for his prize while almost none of Kermit’s fellow performers think there’s anything different about their froggy friend.The Muppets have always been wide-eyed innocents, but the script for the movie by director James Bobin and Nicholas Stoller has made them complete imbeciles with only crazed Animal (Eric Jacobson) and a little later newcomer Walter (Peter Linz) smelling a rat (sorry, Rizzo) and starting to figure out late in the game that something is indeed awry (even though his resemblance to Kermit is only average and Constantine speaks with a Slavic accent he can’t really hide). The script also wastes time with French detective Jean Pierre Napoleon (Ty Burrell) and Sam the Eagle (Eric Jacobson) in their own roundabout investigation that produces very few laughs (odd since Burrell is probably the most accomplished physical comic star working right now). Better are the cutaways to Kermit in Siberia at the mercy of commandant Nadya and the vicious camp inmates (numbered among them are Ray Liotta and Danny Trejo among the dozens of star cameos sprinkled throughout the movie) and who eventually gets on their good side by organizing a prison camp revue (though using A Chorus Line’s “I Hope I Get It” is by now completely uninspired). As for the new songs in the film provided by Bret McKenzie, “We Doing a Sequel” gets the film off to a bright if expected start, “I’m Number One” for Constantine and Dominic features an impressive dancing moment for the frog, “The Big House” lets Nadya show her stuff, “I'll Get You What You Want” complexly cuts between Constantine and Nadya’s storylines, and in the film’s best number “Feels So Right,” Miss Piggy (Eric Jacobson) who has pandered her Celine Dion medley for the group’s stage shows has a fantasy black and white music video with Miss Dion herself, one of the few instances in the movie where a celebrity cameo pays dividends.In the last film, the human element represented by Jason Segal and Amy Adams was an important component of the storytelling. The three primary human actors this time around – Ricky Gervais, Ty Burrell, and Tina Fey – do not enhance their comedy reputations very much with their work here though of the three, Fey is the most comically adept. With most of the Muppet voices now done by a completely different group of performers from the originals (only Dave Goelz is voicing his original group of characters and Steve Whitmire has graduated up to doing Kermit, Statler, and Beaker, among others), one must say that while the voices are reasonable facsimiles of the originals, the impact isn’t nearly as dynamic or involving. Even relatively minor characters like Scooter and Janice (both originally voiced by the late, great Richard Hunt) are rather limp now as done by David Rudman. The cameo placements have really gone overboard in this latest adventure with these stars among those glimpsed (sometimes only for mere seconds): Tony Bennett, Hugh Bonneville, Jemaine Clement, Sean Combs, Rob Corddry, Celine Dion, Lady Gaga, Zach Galifianakis, Josh Groban, Salma Hayek, Tom Hiddleston, Tom Hollander, Toby Jones, Frank Langella, Ray Liotta, James McAvoy, Chloe Grace Moretz, Usher (who’s, of course, an usher), Miranda Richardson, Saoirse Ronan, Til Schweiger, Russell Tovey, Danny Trejo, Stanley Tucci, and Christoph Waltz (who does, of course, a waltz with Sweetums).

"Welcome to the Big House"

The film has been framed for this release at 1.78:1 and is presented in 1080p resolution using the AVC codec. Sharpness is outstanding throughout, and color is generally solid and well managed though naturally a couple of the bright, garish colors might tend to bleed just a little. Black levels are good with above average shadow detail, and contrast is consistently maintained. The film in both the theatrical and extended cuts has been divided into 24 chapters.

The DTS-HD High Resolution 7.1 sound mix has a consistent 2 Mbps bitrate to produce a bright and engaging soundtrack. The mix does use the entire soundfield best with the songs by Bret McKenzie and the background score by Christophe Beck, but there is some directionalized dialogue that manages to make its way interestingly into separate front or rear speakers on occasion, and there are some interesting split surround pans that might have been utilized to an even greater extent.

Extended Version of the Film (1:59:13, HD)Statler and Waldorf Cut of the Film (1:42, HD): unsurprisingly, the two curmudgeons offer their own (abbreviated) version of the movie.Blooper Reel (9:45, HD)Rizzo’s Biggest Fan (2:47, HD): Rizzo’s biggest fan writes an angry e-mail to the producers chastising them for the brevity of his favorite’s role in the movie.“I’ll Get You What You Want” Music Video (3:18, HD): Bret McKenzie performs his own composition from the film.Promo Trailers (HD): Sleeping Beauty, Maleficent, Disneynature: Bears.DVD/Digital Copy: disc and code sheet enclosed in the case.

Muppets Most Wanted is a pleasantly innocuous entertainment without the real pathos and wit that distinguishes the iconic characters’ earliest films. The Blu-ray, however, does present the movie in its best light with sterling video and audio.

Thanks for the great review, Matt.
I watched this film this evening and found it just like you describe. Fun, but not memorable. It had its moments, but not enough to purchase it on Tuesday.

Oh the irony of calling the extended edition "unnecessary," which is the version I watched. And what a jab that this is offered seamlessly, but some more significant Disney offerings coming to Blu-ray this week (and Pocahontas much earlier) aren't.

Regardless, another great review, Matt!

Who offers lossless audio in 2014?

MatthewA said:
Who offers lossless audio in 2014?
Click to expand...

It's not DTS-HD Master Audio? I thought that was just a typo. Last time Disney did that was on the Bambi Blu-ray.

Mark-P said:
It's not DTS-HD Master Audio? I thought that was just a typo. Last time Disney did that was on the Bambi Blu-ray.
Click to expand...

Nope, not a typo. It's DTS-HD HR 7.1. That's why I mentioned the Mbps bitrate in the review. Why Disney opted for that encode instead of MA, I have no idea.

It seems the two alternate cuts are for the US disc only.

Can't wait to pick it up!!! The audio change is quite interesting. No difference between a dts-ma track??

I don't know, but at least one BD from Disney International has a full DTS-HD MA 7.1 track at 5063 kbps. You do lose the two alternate cuts of the film, but I think I will be importing this one:

Code:
You must log in or register to reply here.