Although the British mathematician and cryptanalyst Alan Turing played a key role in the defeat of Nazi Germany during World War II, his name was little known until the release of The Imitation Game, a riveting drama which garnered eight Academy Award nominations. This highly-praised film has now come to Blu-ray with a splendid transfer from Anchor Bay and The Weinstein Company. 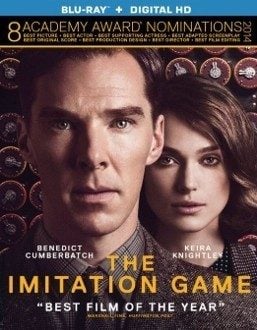 Sometimes it's the very people who no one imagines anything of who do the things that no one can imagine.

When Great Britain declared war against Germany in 1939 it faced tremendous challenges. The Nazis quickly occupied most of Europe and German U-boats disrupted efforts to send food and supplies to England by sea. One of the most perplexing problems was that British Intelligence was unable to decipher intercepted German communications because the Nazis were using a seemingly unbreakable encryption device called Enigma. Even though the British had come into possession of an Enigma machine, they were unable to decrypt German messages because of Enigma's ingenious design. The Germans changed Enigma's settings every night at midnight, and the machine was capable of 159,000,000,000,000,000,000 different combinations.

The Imitation Game opens in Manchester, England, in 1951. A break-in at the home of Professor Alan Turing (Benedict Cumberbatch) is being investigated by Detective Nock (Rory Kinnear). The crime was reported by a neighbor, and although Turing's residence has been ransacked he claims that nothing is missing. Something about it strikes Nock as suspicious, and shortly thereafter the headquarters of MI6, Britain's Secret Intelligence Service, receives a message: "Alan Turing has been robbed. Manchester police investigation pending."

In London, shortly after the declaration of war, 800,000 children are being evacuated to the English countryside in anticipation of London being bombed. Britain's best cryptologists, linguists and mathematicians are summoned to Betchley Park, where British Intelligence is operating in a former radio factory. One of those summoned is Alan Turing, a mathematics prodigy who became a Fellow at Cambridge at the age of 24. He is interviewed by Commander Denniston (Charles Dance) of the Royal Navy, the military officer in charge of the Bletchley Park facility. The interview begins badly because Denniston does not like Turing's attitude, but the officer is taken aback when Turing tells him that he already has deduced that the purpose of the Top Secret project is to break Enigma. "I like solving problems, Commander," says Turing, "and Enigma is the most difficult problem in the world."

Turing is brilliant but clearly lacking in social skills. In flashbacks we learn that he was an odd duck in school, where he had only one friend and was bullied by classmates. In the first meeting with the team which has been selected to tackle the Enigma machine, he is introduced to Hugh Alexander (Matthew Goode), who has been selected by Commander Denniston to head up the group. Turing balks at having to work with others, and he alienates them by declaring that they "would only slow me down." They then meet Stewart Menzies (Mark Strong) of MI6, who informs them that Britain is losing the war. "Break the code; at least we have a chance."

Turing quickly realizes that standard methods of decryption are not going to work. He conceives of the idea that only a machine can do the job. Denniston scoffs at the idea, but Turing goes over his head and prevails upon Menzies to deliver a letter to Winston Churchill. Denniston is then ordered to put Turing in charge of the project. Turing decides to remake the team by getting rid of two men and replacing them with people whose talents are more geared toward problem solving. He places an ad in the newspaper which invites people to apply for a secret job if they can solve a particularly difficult crossword puzzle. The candidate who proves to be the most adept is a woman, Joan Clarke (Keira Knightley), who is able to solve a puzzle more quickly than Turing. She proves to be invaluable to Turing and also becomes his confidant. Turing finds himself at loggerheads with Commander Denniston, a martinet who is incapable of understanding what the brilliant mathematician is accomplishing.

While Turing works day and night to decrypt Germany's secret communications, he has a secret of his own. He is a homosexual, and practicing homosexuality was a crime in Great Britain. There is a foreboding of dread every time the film flashes forward to 1951, as Detective Nock – having no inkling of what Turing’s real crime is - doggedly tries to solve the mystery of who this mathematics professor is and what he did during the war.

The Imitation Game is a fascinating film which not only describes a vital part of the war effort but also succeeds in helping even the mathematics-impaired among us to gain some understanding of how the Enigma code was broken. Intertwined is the tragic story of Alan Turing's personal life and how shamefully and cruelly this genuine war hero was treated by his country less than a decade after World War II ended. Benedict Cumberbath is superb in his Academy-Award nominated performance, portraying a genius who almost paradoxically is a gentle man who is unconcerned about the feelings of others. Keira Knightley deservedly was nominated for Best Supporting Actress, a role which requires her to be both tough and sensitive. Director Morten Tyldum was nominated for Best Director, and he manages to shift the action from past to present to future and back again without compromising the film's cohesiveness. Screenwriter Graham Moore's exceptionally deft plotting and dialogue earned him the Academy Award for Best Adapted Screenplay. The Imitation Game also was justifiably nominated for Best Picture.

Alan Turing is widely regarded as the father of theoretical computer science and artificial intelligence. Without his pioneering work, the computer I am working on as I write this review might not exist. Certainly, World War II likely would have gone on for several more years with millions of additional deaths. His story is well-worth learning and remembering.

This Blu-ray release of The Imitation Game is framed at 2.39:1, which I presume is its correct aspect ratio. It is encoded with the AVC codec and the transfer is outstanding. The picture is highly detailed, black levels and shadow detail are excellent, and an appropriate level of grain presents the viewer with a very pleasing, film-like appearance. Colors, although somewhat muted by design, are consistent and accurate throughout. Cinematographer Oscar Faura's work superbly shows off the film's Academy-Award nominated production design, which faithfully recreates the look of World War II-era England. I detected no evidence of excessive digital manipulation or other anomalies.

The English 5.1 DTS HD- MA audio is very pleasing. Dialogue is mostly confined to the center channel and is clear and understandable throughout, with English subtitles available for those who will benefit from them. There are a few brief scenes of war which provide some punch, although this not by any means a war film in the usual sense. Ambient sounds of rain are very realistic, and when Turing's machine is turned on the surround channels give the viewer the feeling of being present at the moment. The wonderful, Academy-Award nominated original score by Alexandre Desplat is given a wide and pleasing soundstage. This is not quite demonstration disc audio, but it does what it does extremely well.

The extras on this Blu-ray disc include an interesting commentary track by director Morten Tyldum and screenwriter Graham Moore. They discuss the way the film is structured with scenes shifting from past to present to future and back again. They also talk about the history upon which the film is based and the theme of someone who is brilliant but "different" trying to find a place in this world.

"The Making of The Imitation Game" is a 23-minute featurette which looks at the real-life Alan Turing, the casting of the film, the performances of both the leading actors and the supporting cast, etc.

Two deleted scenes, with a combined running time of approximately three minutes, focus on Detective Nock as he investigates Turing.

Also included are trailers for Philomena and The King's Speech, as well as an UltraViolet code.

The Imitation Game is a stirring, astonishing, and tragic true-life story about how a brilliant but socially inept man accomplished the impossible by breaking the supposedly impregnable Enigma code during World War II. This is a wonderful film which will have viewers glued to their seats from start to finish. It is one of the best films of 2014 and this Blu-ray edition is essentially flawless.

This is a birthday buy for me!!!! This year's B-day weekend is shaping up already to be something special. This will help to make that much more special!!!! Thanks for such a very heads-up review!!! This film exceeded all expectations I had--and then some!!!
You must log in or register to reply here.