Tales from the Crypt Presents: Bordello of Blood Blu-ray Review

What started as a potential franchise with Tales From The Crypt Presents: Demon Knight, the second entry, Bordello of Blood, killed it in its footsteps due to studio interference, bad casting decisions, budget constraints, and many other factors, making it a lesson on how NOT to make a movie. 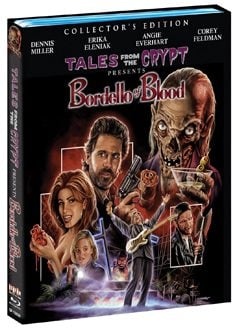 When her delinquent brother Caleb (Corey Feldman) goes missing, Katherine Verdoux (Erika Eleniak) hires private detective Rafe Gutmann (Dennis Miller) to find out what happened to him. Rafe discovers that Caleb uncovered a brothel underneath the mortuary run by head vampire Lilith (Angie Everhart). That’s pretty much all one needs to know about the abysmal follow-up to the much better Demon Knight in the Tales From The Crypt movie series. There’s lots wrong with the film, first and foremost being Dennis Miller’s performance (if you can call it that), who is only here to cash a $1 million paycheck while still shooting his HBO series during production of the film. The screenplay by A.L. Katz and Gilbert Adler (based on an inherited student script by Bob Gale and Robert Zemeckis) tries to be funny and original, but Miller keeps getting in the way with his ad libs, forcing other characters to deliver any pertinent plot points.

The movie is not all bad - Chris Sarandon is quite good as Reverend Current, who is trying to keep the brothel a secret until he eventually helps Rafe as a vampire slayer (a complete 180 from his role as head vampire in Fright Night). Aubrey Morris is dementedly funny as mortician McCutcheon. And Whoopi Goldberg provides a good laugh in an uncredited cameo as a hospital patient. Seeing the included documentary and listening to the commentary track explains how everything (and I mean everything) on this film went wrong.

Tales From The Crypt Presents: Bordello of Blood arrives on Blu-ray from Scream Factory (an imprint of Shout! Factory), thanks to their licensing agreement with Universal, in an acceptable 1080p transfer compressed using the AVC codec, retaining the film’s intended 1.85:1 theatrical aspect ratio. Fans will be happy to know that the film begins with the original Universal Studios logo (the one with the theme by James Horner). Unfortunately, the transfer provided to Shout! Factory appears to be from the old Universal, as there is some noticeable digital manipulation going on in the way of edge enhancement. It’s minor, but does add some barely noticeable ringing in some of the shots. Colors are consistent and not over-saturated. Contrast is decent, but blacks never quite come off dark enough, resulting in a flat image overall.

As with most Scream Factory releases, Bordello of Blood contains both 5.1 and 2.0 stereo soundtracks (the movie was released at a time when Universal used DTS almost exclusively on all of their releases). The 5.1 track is quite active when it needs to be, with some nice front-back panning effects. Dialogue is clear and well-defined, never getting lost in the mix. LFE is a bit weak, but this is a low-budget production made in the early days of DTS. Not quite demo material, but it’s still a fun track.

Audio Commentary with Co-Writer and Producer A.L. Katz: Moderated by Icon of Fright’s Rob Galluzzo, producer A.L. Katz discusses many of the problems with the production (he has very few nice things to say about Dennis Miller), the evolution of the TV series to the movies, and how he became involved with Tales From The Crypt.

Shout! Factory has presented a nice collector’s edition that reveals a lot of the drama and politics that went on behind the scenes of Bordello of Blood that eventually led to its lackluster performance at the box office and ended the Tales From The Crypt movie franchise.