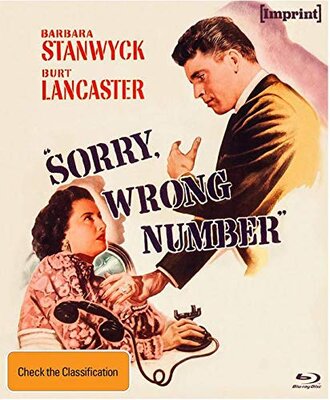 It's a fine movie, but not at that price point.

Robert Crawford said:
It's a fine movie, but not at that price point.
Click to expand...

For me, Barbara Stanwyck in blu with the following extras makes it worth that price.

For me, Barbara Stanwyck in blu with the following extras makes it worth that price.

Agreed, but, man I would hate to buy this and then find out Criterion is releasing it here.

Robert Crawford said:
Agreed, but, man I would hate to buy this and then find out Criterion is releasing it here.
Click to expand...

From your lips to Jon Mulvaney's ear.

Rodney said:
From your lips to Jon Mulvaney's ear.
Click to expand...

I just ordered it from DD, watch it be announced by Criterion in the next month or two.
Last edited: May 24, 2020

That price is pretty steep, but those sound like excellent extras. It IS one of my favorite Stanwyck films, so I'll wait to hear a report from you on its quality before taking the plunge.

Matt Hough said:
That price is pretty steep, but those sound like excellent extras. It IS one of my favorite Stanwyck films, so I'll wait to hear a report from you on its quality before taking the plunge.
Click to expand...

Big fan of Barbara Stanwyck but the part belonged to Agnes Moorehead who performed it many times in the original radio version. She was just so good in it.

In fairness, the radio play only had her character in it so that's a distinct advantage. think Barbara was great in this movie and deserved her Best Actress Oscar nomination.
C

jcgrey87 said:
I've never seen this. I wonder if it's any good.
Click to expand...

It is VERY good and Stanwyck is simply magnificent. The film was shown on UK TV last week in HD and the picture and sound both were 10/10.

I watched the DVD yesterday. The picture quality was simply awful with dropouts and white speckling from start to finish. Have ordered the bluray as it has to better . The film was shown on UK TV recently in HD and the quality was outstanding.
C

It streamed on the Criterion Channel last month. I thought the transfer looked pretty good. Not top notch, but not bad.

Matt Hough said:
That price is pretty steep, but those sound like excellent extras. It IS one of my favorite Stanwyck films, so I'll wait to hear a report from you on its quality before taking the plunge.
Click to expand...

Sorry in advance -- I can't help but point out yet again how spoiled we movie collectors have become since the days of 8mm prints. That was the 50's-60's, when a 12-minute black and white silent cut-down (called a digest) of a major movie retailed for $5.95. It is extraordinary to realize that, translated to current dollar value, that same little reel would retail for over $50.00!

So, you pay roughly $35.00 for one of Imprint's Paramount classics today. Okay, make it $40, including shipping and tax. If you laid a 200' reel of 8mm film flat, and placed a Blu-ray disc on top of it, you would have the equivalent of an eclipse... they are both the same width across. What do you get for your (now) $50.00 if you buy the 8mm reel? A kind of fun thing that you thread through a damaging projector, eventually adding vertical scratch marks that cannot be wiped off. You are getting a story so truncated that only a few highlights can be included. If you want sound, you gotta provide it...that, or buy the 9-minute (no intertitles to pad out the running time) 8mm sound edition that has a $12.95 retail tag (over $100.00 current). How about sound and color? The equivalent of roughly $175.00. Even if you could find these reels at a discount via department store or wherever back then, you would still be forking out a ton of money for a very short ride.

And I did. And I did. And I did. Film collecting in the 8mm era was fun, but for us teenagers, it was costing us every penny of our allowance and lawn-mowing money just to grow a collection of these little movies which I, at least, used to show in my dingy basement theater to neighborhood kids for a nickel per double-feature. I provided all the music and voices. Eventually I was buying feature films that could wipe out two week's salary...the full-length but pan-and-scan ONCE UPON A TIME IN THE WEST cost me $300.!

I contributed greatly to the coffers of the studios even more when VHS became widely available in 1977 or so. Couldn't get enough of these actual, uncut feature-length favorites, spending as much of my weekly salary as I could squeeze to collect more of them. I did so to the detriment of my marriage! On a typically small t.v. screen of the day (19-25"), VHS looked pretty good, but was an absolute dream come true for us.

Of course, laser disc (and CED disc, lagging by two years after many failed quality tests) actually surfaced as early as 1979, but many of us were late to discover this seemingly well-kept secret format. Once we did, and invested in a player and a few discs, we were in Heaven. Wow...that PQ was so extraordinary (but still being viewed with 19-25" screens). The cost (beyond the player) was less per movie than VHS by a general long shot. For $30-40, we could own a gorgeous, LP-size package with jacket art you wanted to display. The discs were hefty and felt indestructible, and just holding them was enough to draw ooo's and ahhh's from envious friends -- they were literally quite beautiful with their rainbow reflections. You could even rock-solid freeze-frame the CAV editions, which was a very big deal back then, as Roger Ebert and other film professors would attest.

Of course, discs had their drawbacks (costly to ship, many discs developing "rot," having to flip them during the movie, etc.) but they boasted the first-ever audio commentaries (the Criterion CAV box of KING KONG was the first, but the box and its two discs retailed for a hundred bucks...back in the early 80's!), letterboxing for widescreen films, lots of bonus materials. Of course, all of these features became commonplace -- even expected -- on the next format to hit us, DVD.

Eventually cheaper still than laser discs, this format really took off, as did its resolution upgrade, Blu-ray. When you hold up one of these rather pretty pieces of plastic, you are holding an entire motion-picture all stored on an amazing 5" disc which can (with a few exceptions for extra-long movies) be played without interruption and which, on much, much bigger screens, looking damn near as good as a projected theatrical image (in many cases better, after film restoration and clean-up work). The technology of this whole digital storage business is still like sci-fi to me...but, I don't care how it works, as long as it works.

This, friends...what we're living in now (take away a nasty pandemic)...is the zenith for most film aficionados. Unless you have an 8K system that includes an astronomically expensive projection set-up for a 200" screen, we are living in Nirvana for a fraction of the cost of collecting that we experienced forty or fifty years ago.

Yet, we complain about prices. I do it, too, and I should know better.

Now, we bitch because we have to pay $30-40 for a movie that will theoretically last our lifetimes (if you're my age, at least!) that has potentially beautiful, crisp black and white or even restored Technicolor, shown on large LED or OLED screens, maybe even in 3-D, and maybe with five or seven speakers installed across the walls and even ceiling for sound most theaters cannot replicate. But, damned if we're not determined to wait months to see if the price comes down.

It's human nature to look for a bargain, but we seem to lose sight of the fact that film collecting is a bargain right now!!

I know I've written this essay in slightly different form a number of times in other threads in the past, but every once in a while I feel compelled to reiterate...this hobby of ours (or as wives and significant others might describe it, this obsession of ours) gives us countless hours of pleasure that can be repeated whenever we're in the mood, and that, I think, is rather priceless.

So, a big shout-out to all the studios and little distribution companies for keeping the movie announcements coming and the prices low enough so that we can actually hope to own our favorite films looking and sounding about as good as we'll probably ever see and hear.
Last edited: Jun 8, 2020

Well, it's becoming obvious that Imprint is just taking whatever Paramount hands them and in the case of this and I Married a Monster from Outer Space, after seeing reviews of both what they're being handed are old transfers. I know they lucked out getting War of the Worlds, but we have that coming from Criterion - but I really don't need transfers from the DVD era on Blu-ray - not any more.
C

haineshisway said:
Well, it's becoming obvious that Imprint is just taking whatever Paramount hands them and in the case of this and I Married a Monster from Outer Space, after seeing reviews of both what they're being handed are old transfers. I know they lucked out getting War of the Worlds, but we have that coming from Criterion - but I really don't need transfers from the DVD era on Blu-ray - not any more.
Click to expand...

The BD of 'Sorry Wrong Number' is good and has very few dropouts . The DVD of ' Sorry Wrong Number ' is a mess and for me is almost unwatchable. The BD of ' I Married a Monster' is not good with many dropouts infact in my opinion the DVD is better in this particular area and makes for better viewing. Both BD releases have English sub-titles .
You must log in or register to reply here.