With the James Bond franchise celebrating its golden anniversary in 2012, hopes were high that 007’s homecoming to the big screen after a four year absence would return to the series’ high standards somewhat tarnished by the something-of-a-misfire last installment Quantum of Solace. Happily, Skyfall not only delivered the goods quality-wise, but its popularity around the globe resulted in its becoming the high grossing movie in the history of the Bond films with a worldwide gross of over a billion dollars. That’s very impressive for a character who’s been through several generations of moviegoers and shows no signs of stopping. The new steelbook packaging for this reissue of the movie packs the original disc inside the new casing. 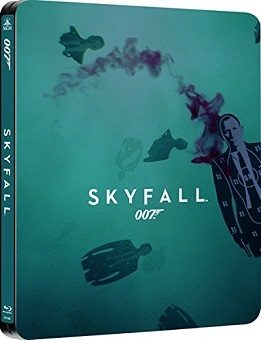 Surprise is the key word for Skyfall as the script by Neal Purvis, Robert Wade, and John Logan as well as the direction by 007’s first ever Oscar-winning director Sam Mendes uses every possible means for keeping the audience astonished and delighted and off balance from every tantalizing twist in the plot and each unexpected piece of character development. What begins as a seeming story of an unknown villain targeting Britain’s MI6 for destruction and aided in no small part on the other side by the government’s own disenchantment by mistakes being made by head of operations M (Judi Dench) turns wittily and unpredictably into a vengeance tale with M as the target and James Bond (Daniel Craig) as one of the key players to bring about her immolation.

It goes without saying that Skyfall triumphs in the action sweepstakes as witnessed by its ten-minute pre-credit sequence which has breakneck pacing going from the streets of Istanbul to rooftops and onto a moving train and ending with a spectacular shock through Bond’s settling the score with the adversary from the opening chase in a beautifully stylized fight in silhouette staged in a glass room in Shanghai. From there we have a spectacular subway wreck in London and the climactic cat and mouse attack on Bond’s ancestral Scottish home, the film’s final twenty-minute set piece. By then, the villain Silva (Javier Bardem) has long since revealed himself, but his plans remain a continual source of astonishing little bombshells which make the movie hold one’s attention through its 143-minute running time. (Admittedly in the theater, the film seemed a trifle drawn out, but it rather surprisingly plays beautifully and much more fluidly on Blu-ray.)

By now Daniel Craig completely owns the part of James Bond accentuating his brutality but without sacrificing moments of tenderness and expressions of loss and change. He is clearly the Bond of the 21st century, and he continues to explore colors of the man’s personality. The film gives Judi Dench her meatiest assignment in a Bond film since The World Is Not Enough. She’s wonderful, of course, trading verbal jabs with Bond and defending herself against her overseer Gareth Mallory (Ralph Fiennes) as well as against a critical MP in a governmental hearing. Javier Bardem’s villainous character is rather schizophrenic in nature: almost effete on his own island sanctum but gaining in bloodthirsty viciousness as the movie runs. Ben Whishaw is the new Q, a young computer genius who unfortunately learns he doesn’t have all the answers, a performance that will likely grow on viewers as he works with Bond on additional future missions. Bérénice Marlohe is the primary Bond girl this time out, Silva’s mistress Severine, but her role is less developed than other Bond girls in the series. Albert Finney makes a surprise cameo appearance late in the movie as the Bond family’s old gamekeeper Kincade. As for Ralph Fiennes and Naomie Harris who plays inexperienced field agent Eve, let it suffice to say that the writers’ wonderfully clever use of the two characters throughout the film ending with an engaging and satisfying sense of coming full circle makes a most memorable end to a marvelous Bond adventure.

The film has been framed at 2.40:1 in a faithful replication of its theatrical presentation and is offered in 1080p using the AVC codec. Color is very bold when it needs to be but never seems out of control or over the top, not even in the Shanghai sequences with their riotous neon and fluorescent displays. Sharpness is excellent, and black levels are satisfyingly deep with details in shadows never compromised. The film has been divided into 32 chapters.

The DTS-HD Master Audio 5.1 sound mix is all one would expect from a Bond movie or any 21st century action-adventure film. There is almost continual use of split surround effects and with pans across and through the soundstage during chase scenes, and the LFE channel gets ample opportunities to show its stuff with numerous explosions and calamities. Thomas Newman’s background score and Adele’s title song get wonderful spread through the soundfield while dialogue has received expert recording and has been mostly placed in the center channel with an occasional random bit of directionalized placement.

Audio Commentaries: director Sam Mendes goes solo on the first one while producers Michael Wilson and Barbara Broccoli along with production designer Dennis Gassner share the second one. Mendes’ track mixes production anecdotes with descriptions of what’s on screen. Still, it’s likely preferable to the Wilson-Broccoli-Gassner track simply because they spend so much time back patting themselves and the crew that the accolades get rather tiresome. They do mention occasional problems or difficult situations, but it’s a lengthy film to sit through to get the few moments of interesting information they offer.

Shooting Bond (59:24, HD): an all-purpose montage of fourteen featurettes covering every key aspect of the production. There is a “Play All” feature, but they can also be watched individually. Many of these contain spoilers about events in the film, so it would be foolish to watch these before experiencing the movie first. They are:

Premiere in London (4:28, HD): features many of the actors, the director, and the producers walking the red carpet for the Royal Command Performance.

Skyfall is a thrilling entry into the James Bond canon and a film that reestablishes 007 as a reliable action hero in a quality film. Reference video and audio and a generous array of bonus features complete the package. Highly recommended! The steelbook packaging is exclusive presently to Best Buy, but Amazon has established an order page, and marketplace sellers are asking inflated prices for those interested.

I like these covers! I won't be buying though as I have all of the film's already.
I really thought the theme song for this one was amazing.
I got to see the film a day early of its release which was a lot of fun too. I can't wait for spectre!
New mans score was very good. I think Arnold's quantum score was one of his best and I hope Arnold returns eventually as well.

Aren't there already reviews for all these Bond movies?

I'm wondering why another review for them if only the case holding them is different.

TonyD said:
Aren't there already reviews for all these Bond movies?

I'm wondering why another review for them if only the case holding them is different.

When PR firms send review materials, they expect reviews. If a review is going to have my name on it, the film part of the review and the audio and video ratings will be mine. I was kindly allowed to copy the bonus features information from previous reviews so I could get the reviews up in a timelier fashion with my heavy reviewing schedule.

Osato said:
Newmans score was very good. I think Arnold's quantum score was one of his best and I hope Arnold returns eventually as well.
Click to expand...

I didn't really care much for Arnold's scores on the Brosnan films, but I've really enjoyed his work on the Craig movies. Go figure.

As a bit of useless trivia...Skyfall's aspect ratio in IMAX theaters was opened up to 1.90:1. If they re-issued the Blu-ray at that ratio, I'd rebuy it to keep my inner completist happy.

Matt I get that part of it and I appreciate what you do for these reviews, I was more thinking out loud about it is all.
You must log in or register to reply here.