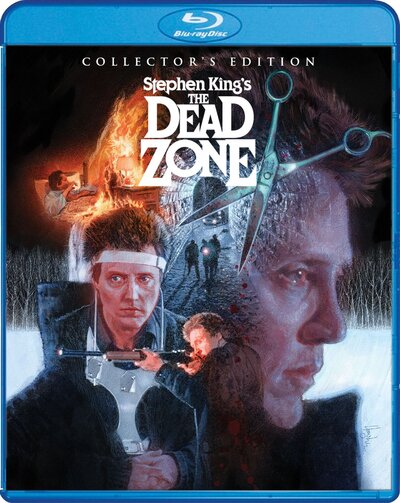 We see in the future that we’re going to present you with an upgraded version of Stephen King’s and David Cronenberg’s THE DEAD ZONE on Blu-ray this Summer! Here are the early details we have at current time to share:

• National street date for North America (Region A) is July 27th.
• This will be presented as a Collector’s Edition and will come guaranteed with a slipcover in its first three months of release.
• The newly commissioned artwork pictured comes to us from artist Hugh Fleming. This art will be front-facing, and the reverse side of the wrap will feature the original theatrical artwork.
• Extras will be announced on a later date but we can confirm today that there will be a new HD transfer of the film!
Pre-orders on our site begin today which includes the Blu-ray plus a rolled 18” x 24” poster of the new art. The poster is exclusive to us and will be made at a limited-run of 700 pieces:
https://bit.ly/3d8XSmg

Awesome. One of if not THE best film adaptation of a King novel ever to hit the screen, thanks to David Cronenberg and Christopher Walken. Looking forward to it.

I'm glad this was rumored to be coming so I didn't buy that Stephen King 5-pack last year.

The Stephen King 5 pack was supposed to have am old, borderline unwatchable master.

Hopefully Paramount has provided Shout with something better.

It's all about the transfer - as long as it's new and wonderful, I'm in.

I LOVE this movie (same with the book), so this is great news.

haineshisway said:
It's all about the transfer - as long as it's new and wonderful, I'm in.
Click to expand...

Yes, it's a great film, maybe even a masterpiece. But what makes it great is the stylistic choices, especially the lighting and use of intermittent softness, as well as shadow, which is used for suspense, and also to put you inside the head of the protagonist (btw, Christopher Walken has never been better.) So, if it's an older master, with mucho softness and lousy contrast and poor color, the delicate balance of the film is ruined. These days, Paramount is batting about 75%--though I understand "Captain Kronos" was much too dark with the wrong color grading--so there's hope.

The Shout Dead Ringers had a very disappointing transfer. So, I'll be waiting to see reviews, like the rest of you. The Dead Zone is probably the most eagerly-awaited Cronenberg left but there are still a few Cronenberg's that need new scans and transfers: The Fly, Dead Ringers, A History Of Violence and Eastern Promises all look bad projected. The Cronenberg's that still await releasing: eXistenZ and Spider. M. Butterfly has never had a high definition disc release either, although I've recently watched a nice streaming version on iTunes. However, it's the only one of Cronenberg's films I don't find worth the effort.

Since Paramount is continuing to license to Shout!, I would love to see a collector's edition of DRAGONSLAYER!!! (as opposed to a bare-bones Paramount release).