My Dinner with André Blu-ray Review

In this day and age of twittering, text messaging, and blogging, a long, intense person-to-person conversation during an extended dinner in a fashionable restaurant would seem almost like something from another world. And yet, Louis Malle’s My Dinner with André is precisely such a film. It doesn’t propose to solve the world’s problems or keep the viewer on the edge of his seat with suspense or doubled up with laughter. It’s merely two intelligent men swapping stories about their lives and their views on everything from the philosophical to the mundane with the simplest of cinematic set-ups. It’s simple all right, but just try to look away once the talking gets started. Criterion is now offering a quality Blu-ray upgrade to their 2009 DVD release. 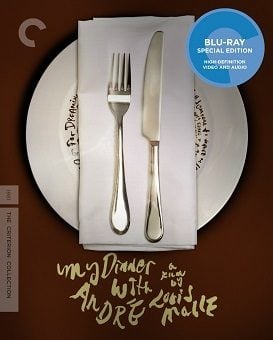 Once close but now somewhat estranged as their lives have taken them in different directions, sometime playwright and actor Wally (Wallace Shawn) and once-acclaimed theater director André (André Gregory) agree to meet in an upscale Upper West Side restaurant and catch up on their experiences of the past few years over dinner. They tell their stories; they debate their differences and then basically agree in principle on what’s important in life and generally have an enjoyable evening getting to know one another all over again.

Despite director Louis Malle’s semi-documentary approach to the material, My Dinner with André is not a documentary. True, the two characters in the script are based on the personalities and experiences of the two men, but their words are a script, and each is playing a character based only superficially on his own real self. And Malle is content to film this fascinating conversation in simple medium shots and close-ups, never opting for any fancy editing or swooping cameras to take the attention away from the personalities of the speakers or the meanings of the words they’re imparting. André unquestionably dominates the evening (and does very little eating of the gourmet meal spread before them), and it isn’t even until forty-five minutes into the movie that we even hear much of what Wally has to say about the stories and philosophies that his dinner partner has been discussing. Topics range from André’s experiences “finding himself” in the forests of Poland, on trips to India and the Sahara Desert, or recounting a harrowing experience of being partially buried alive during a Halloween night. Wally, on the other hand, makes a passionate plea for his electric blanket, his autobiography of Charlton Heston, and other creature comforts, the very simple pleasures that André took his pilgrimages to examine and consider deciding inevitably that they are unnecessary for a fulfilling existence (whatever that is).

Throughout the evening, the two men eventually thrust and parry with each other’s ideas about living a life with purpose as opposed to merely playing at living in society’s preordained roles in robotic fashion. During the almost two-hour running time, you’ll find their ideas alternately interesting, funny, provocative, thoughtful, pretentious, and even infuriating, and one will long to dive in at certain moments and express his own opinions about the importance or the triviality in what’s being discussed. You can tell that the words aren’t simply flying effortlessly and extemporaneously from the mouths of the two men since both (but particularly André Gregory since he does by far the most talking) glance away frequently to consult some obvious notes or cue cards just out of camera range. But you’ll take away a warm feeling of connection with these two intelligent men, each stumbling toward some kind of understanding of his place in the microcosm of civilization, and any movie that can inspire that kind of sober thought deserves some serious attention.

The film has been framed at 1.66:1 and is delivered in a 1080p transfer using the AVC codec. Filmed originally in 16mm, the image has that moderate-to-heavy grained look that comes from that kind of source material, so it looks very much like film. The image is unquestionably clean with no scratches or notable age-related artifacts, clearly the best the movie has looked on home video. Flesh tones look generally natural though color is sometimes just a little plugged up no doubt due to the quality of the original photography. The film has been divided into 16 chapters.

The PCM 1.0 (1.1 Mbps) audio track is exactly what one would expect from a low fidelity source. The slight amount of hiss that was present in the DVD release is missing in this uncompressed track, and the acres of talk are combined expertly with the very slight amount of music at the beginning and end and the subdued clatter of plates and patrons at the restaurant.

Star Interviews (HD): Filmmaker Noah Baumbach interviewed both of the film’s subjects individually in 2009 giving each man about a half hour to reminisce about the writing of the screenplay and the making of the film (surprisingly not even in a New York City restaurant). André Gregory’s interview lasts 31:10 while Wallace Shawn’s is 29:25.

My Dinner with Louis (52:12, HD): In 1982, the BBC television series Arena featured co-star Wallace Shawn interviewing renowned director Louis Malle in Atlantic City. Malle talks about his film career, and the show features lengthy excerpts from many of the director’s most notable films including The Lovers; Murmur of the Heart; Lacombe, Lucien; Pretty Baby; Atlantic City; and My Dinner with André.

Enclosed 27-Page Booklet: contains the cast and crew lists and the chapter listing. It doesn’t contain any film stills (rare for a Criterion booklet) but does contain a critical appreciation of the movie by film writer Amy Taubin and essays by Wallace Shawn and André Gregory which served as prefaces to the published screenplay edition of My Dinner with André.

Scintillating conversation isn’t much found in movies any more which makes My Dinner with André something very special indeed. What a pleasure to see it again in a worthy Criterion Blu-ray edition with some excellent extras and a first-rate video and audio transfer. Recommended!

Everyone I've ever shown this to (or talked to about) hates it.


I first learned about it from Siskel & Ebert many years ago.


I'll be buying it again now that it's on BD.

They finally got this out on blu ray, great, i'll buy it and use it as a sleep aid.

I also enjoyed this film, but Criterion disappointed me by not including the action figures as an extra.

I always have felt the car chase in this film is almost as good as the one in The French Connection. Plus the shoot-out at the end is one of the most incredible action sequences ever committed to celluloid.

Thank you for taking the time to write this review.


I first saw this film when I was about 20 (after seeing a Siskel & Ebert review), and I loved it. I will be picking up the blu-ray.

Here comes another Criterion upgrade from DVD to Blu-ray Disc. I look to have this one in the coming year.
You must log in or register to reply here.