House of Cards is a fascinating and compelling series about political intrigue in Washington, D.C. which has been released on Netflix before making its way to Blu-ray. Season Three, which includes episodes 27-39, is now available and is a strong inducement to engage in binge viewing. Those who have not seen the first two seasons should think twice before proceeding further because this review unavoidably includes some spoilers. 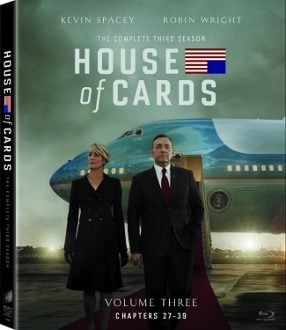 Democracy is so overrated. - Frank Underwood

To call Frank Underwood (Kevin Spacey) Machiavellian might be overstating the importance of Machiavelli. At the end of Season Two the President of the United States, Garrett Walker, was forced to resign and Underwood became just the second person in history to occupy the Oval Office without having been elected to either that office or the office of Vice-President. He undermined President Walker in such a cunning manner that Walker never knew what hit him.

Season Three opens several months into Underwood's presidency, and things are not going well. Unemployment is high and he has been criticized for issuing pardons to people who were involved in the illegal fundraising scandal which was a key to getting President Walker to resign. Underwood's approval ratings have been sinking, and he misses his Chief of Staff, Doug Stamper (Michael Kelly), more than he realizes.

His wife Claire (Robin Wright) is not content to be merely the First Lady. She has her eyes on her own political future and she is intent on becoming America's United Nations Ambassador, but confirmation by the Senate is far from certain. Underwood's political capital has been diminished due to his sinking poll numbers and the nomination of his wife smacks of nepotism. Underwood also has other problems which are flying under the public radar. He is regarded by his own party as a lame duck who probably cannot be elected in 2016. Then there is the matter of Rachel Posner (Rachel Brosnahan), the former prostitute who is in a position to implicate Underwood in the death of Congressman Peter Russo. Rachel is a ticking time bomb because she has dropped out of sight and no one knows where she is.

Kevin Spacey and Robin Wright have each won Golden Globes awards for their performances in House of Cards, as well as garnering Primetime Emmy nominations for Outstanding Lead Actor and Actress in a drama series. The excellent supporting cast includes such fine actors as Mahershala Ali and Molly Parker. Season Three episodes are directed by John David Coles, Tucker Gates, James Foley, John Dahl, Robin Wright, and Agnieszka Holland. The episodes are densely plotted and there are so many characters that drift in and out and in again that binge watching is helpful for keeping track of everything and everyone. The politics in House of Cards are more about power than ideology, but the ideology which does creep into the scripts can be controversial. We do not debate politics or religion here, but fans of House of Cards may be interested in reading this recent article:

The 2.00:1 1080p image is sharp and highly detailed. From a visual standpoint House of Cards is not a particularly colorful series, but flesh tones are accurate and other colors are faithfully rendered. Black levels are solid, and shadow detail is very good. Overall, Sony has done its usual fine work in delivering a very nice Blu-ray release. The montage of time lapse photography over the opening credits is impressive, and exterior scenes were shot on location in Maryland, Washington D.C., and New Mexico. The re-creations of the interiors in the White House are outstanding and very realistic.

The 5.1 DTS-HD MA audio is the equal of the video. The series is dialogue-driven and every word is crystal clear. The surround channels are effectively used to convey ambient sounds and provide the musical soundtrack with an expansive soundstage (Kevin Spacey sings in one episode). Those who need subtitles will find that they are easy to read and usually placed at the bottom of the picture. English, English SDH, French, Portuguese, and Spanish subtitles are available.

The extras for Season Three are minimal. There are just two nice featurettes, both of which appear on Disc Four.

"Backstage Politics: On the Set of House of Cards" is a 25-minute look at how the show's episodes are put together and filmed. It includes some amusing moments.

"A Death in New Mexico" is a 17-minute featurette about the filming of a key scene on location outside of Santa Fe, New Mexico. I cannot say anything else about the scene without giving away a major spoiler.

The only other extra is an Ultraviolet code.

The packaging is still annoying. Once again Sony has opted to put the four discs into a sturdy cardboard gatefold case. The problem is that the discs have to be slipped in and out of sleeves, which makes them vulnerable to scratching and fingerprints. I am able to slide my discs in and out without scratching them, but latex gloves are necessary to avoid fingerprints. The gatefold case is stored inside a fairly strong cardboard slipcase.

House of Cards will not give you any warm and fuzzy feelings about the state of politics in the United States, but there is enough intrigue and outstanding acting to keep viewers involved and coming back for more. The show has been renewed and Season Four is tentatively set to air next February, just in time for the primary season. Which will be more entertaining, the fictional politics or the real thing?

I should point out that the region coding is actually AB. AB isn't an option in our review drop-down menu, so we'll have to change that.
You must log in or register to reply here.