Another of the memorable literary school teachers comes to the screen in Henry Koster’s Good Morning, Miss Dove. Like her male counterpart Arthur Chipping in Goodbye, Mr. Chips, Miss Dove is a no-nonsense educator: explicit in precise decorum and rooted in fact-based education. The 1955 comedy-drama offers a wistful look at small town education from more than half a century ago with teachers who taught generations of families and were strong but undemonstrative pillars of their community. Despite being filmed in Cinemascope, it’s a small film much more character than plot-based and a charming if low-key reminder of a nostalgic period in American life. 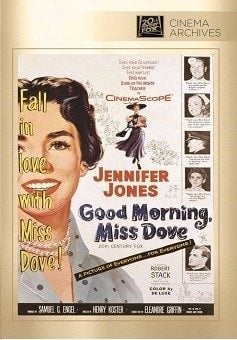 When long-time Cedar Grove Elementary geography teacher Miss Dove (Jennifer Jones) is stricken with a tumor on her spine and lays in her hospital bed awaiting an operation, she and several of the Liberty Hill townsfolk have time to assess her lifetime of work at the school. Though her severe personal habits and strict attention to detail have been the butt of jokes for generations in town, on reflection many of those whose lives she has touched over the years come to recognize her invaluable contribution to the betterment of their community and themselves and show their real concern as Dr. Tom Baker (Robert Stack), a former rambunctious pupil whom she inevitably tamed, is chosen by her to be her surgeon for the operation.

Based on the novel The Terrible Miss Dove by Frances Gray Patton, Eleanore Griffin’s screenplay, like the book, uses flashbacks – some from many years ago, some from less than a year previous – to etch the story of this spinster teacher who honorably gave up a possible whirlwind romance and worldly travel to come back to her hometown and work as a teacher to repay an enormous debt run up by her father before his sudden death. Miss Dove is a stern but ultimately kind person without prejudice who takes underprivileged children like William Holloway (John Hensley and Gary Pagett as children, Chuck Connors as an adult) and Maurice Levine (Aifred Calazza as a child, Jerry Paris as an adult) under her wing, steers those on the wrong path onto if not an honest path at least to an honorable admission of their shortcomings, and even saves the town from bankruptcy on one fateful day after the stock market crash. Henry Koster’s delicate handling of this slight but affecting story is exemplary making sure the wide Cinemascope screen gets filled with the many people in town whose lives have been affected by this woman (and even in her small hospital room, he manages to stretch visitors to fill the frame). And while there is definite sentiment attached to the story as the town waits for news of the results of her operation, the film is never maudlin even as Miss Dove subtly plays matchmaker or gently chides her former student now a playwright for his inelegant vocabulary.

Though for most of the movie Jennifer Jones must play older than her years and affect an almost masked-like sense of gravitas, she’s effervescent and enormously appealing in a flashback where as an eager college graduate she dreams of traveling the world and anticipating the exciting potential of a new romance. Her Oscar-nomination this same year came for Love Is a Many Splendored Thing rather than for this film, but she’s quite affecting by being still and using a stentorian voice to establish her uncompromising approach to life and work. Robert Stack gets to play light and dark as the surgeon who pokes innocent fun at the spinster but also greatly respects her while Chuck Connors as the policeman who worships Miss Dove’s goodness and her kindness to him, Peggy Knudsen as a chatterbox nurse, Edward Firestone whose character breaks out of prison to check on his beloved teacher, and Jerry Paris as the Jewish playwright who owes his acceptance in town to her farsighted behavior all do excellent work. Richard Deacon is surprisingly chipper as the school principal while Robert Douglas as the bank president who must inform Miss Dove of her father’s debts and who later owes his bank’s salvation to her also ages believably and performs winningly in the part.

The Cinemascope 2.55:1 theatrical aspect ratio is presented letterboxed in this MOD transfer without anamorphic enhancement. Due to that, sharpness is somewhat compromised and several types of video artifacts like aliasing, line twitter, and moiré patterns crop up occasionally. On the back cover of the case, a couple of color stills show a warm, vibrant picture. That’s not what we have on the disc; rather, the image looks rather dated with brownish, rather lackluster color and muted skin tones. Black levels aren’t very deep, either. To its credit, there are only a few stray dust specks and the reel change markers are nowhere to be seen. The film has been divided into 11 chapters.

The Dolby Digital 2.0 stereo sound mix will need quick adjustment of volume levels to avoid damaging your equipment and to prevent distortion. That said, the sound quality is overall very good with directionalized dialogue clearly recorded and presented and with the sound effects and Leigh Harline’s tender background score a nice complement to the overall effect of the film.

Good Morning, Miss Dove is a special enough film to deserve a remastering that could bring out the warm color and vibrant skin tones that would give this touching and memorable story more lively cinematic life. As is, we can be grateful we at least got the widescreen image, something the unfortunate Fox Cinema Archive series has a very spotty reputation for offering its Cinemascope holdings.

Thank you for the thoughtful review, Matt. This is testament to the state of much of my grandfather's filmography. Not even an anamorphic transfer and only available from MOD.This is one of the last ones not available on DVD til now. And most of the ones I've picked up have been MOD releases.OTOH I have to acknowledge at some of his movies have been given better treatment, and I'm grateful that those titles at least have received some love.

How proud you must be, Kevin, of your grandfather's ability to handle so many different kinds of subject matter and to work so fluidly in bridging the change from square framing to the widescreen era. I wish his films were shown greater respect, for his legacy and for our sakes as well.

Another disheartening review of a great catalog being shabbily released to the public. It rather makes me wish Warner Archives controlled all of Fox's library.

This is bloody disgusting. I've been waiting and checking for the past 15+ years for this fantastic film to receive a DVD (/BD? - yeah, right!) release. My heart leapt when I saw it was finally out, only to find that Fox have tossed it off in a substandard, non-anamorphic print. They certainly aren't charging a commensurate 'substandard, non-anamorphic' price for it. I'll pass.

Why do they even bother?

Great review Matt. I have the 16:9 (2.35:1) release from Portugal. Also in stereo. Removable subtitles too. The color looks good to me on this transfer- maybe slightly brown like other De Luxe color movies from this era can look to be at times.
Great to hear from you Kevin. I admire the films of your grandfather. He handled the CinemaScope frame very well, overcoming technical difficulties he must have faced at the time of films such as THE ROBE. I enjoy his work on FLOWER DRUM SONG- quite a different musical to most others of the time, especially compared to his early work with Deanna Durbin.

There is no excuse to release non-anamorphic transfer at htis point in time. Although I would love to own this film I will pass on this half hearted release. It sucks how little respect the studios show for their older catalouge titles and for the consumers.
E

Someone needs to care as much as we do.

I happened to be awake this morning and caught the Fox Movie Channel broadcast of this movie (well, about fifteen minutes of it). The print there even with its own specks and reel change markers was in every way superior to the one issued by Fox Cinema Archives.

Sadly, this is no surprise!

The only other DVD available appears to be the Spanish edition. Does anyone know whether or not it's anamorphic and OAR?

Since last year I'd like to think we're a little more enlightened as to the nature of these things and I see now that the Spanish Resen DVD is definitely a pirate, likely of a TV broadcast.
You must log in or register to reply here.