After serving up a first summer season that earned both middling reviews and tepid audience response, CBS renewed Extant with the promise of a restructuring of the sci-fi drama with more emphasis on action and suspense. While the show did deliver on those promises, the increased suspense and major action sequences were all to serve a plot as overly familiar and predictable as it was possible to be with ideas culled from sci-fi standards ranging from Invasion of the Body Snatchers to Terminator, 2001, Blade Runner, and Close Encounters of the Third Kind. New casting and subplots spinning off into multiple directions continually disrupted characterizations already established, and by the end of the season, the muddle was foundering enough for the network to pull the plug on the entire enterprise, so some ambiguous events which happened near the end of the final episode will never see a resolution. 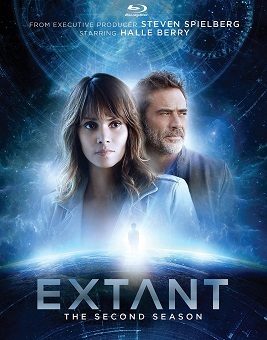 Having given birth to an alien child (Shannon Merrill Brown, then morphing eventually into an adult character named Adhu played by Henderson Wade) who then disappears and is reported dead, astronaut Molly Woods (Halle Berry) is horrified by a further series of catastrophes which take from her the humanich named Ethan (Pierce Gagnon) whom she considered her son and a freak accident which kills her husband John (Goran Visnjic). She’s placed in a rest home ostensibly to recover from shock but actually is being fed pills by the government to keep her incontinent and unable to interfere with the plans to make sure all alien life forms which she inadvertently brought to Earth can be wiped out. To do this, the government has appointed John’s assistant Julie Gelineau (Grace Gummer) to head the building of multiple warrior humanichs based on the prototype Lucy (Kiersey Clemons) who can identify the aliens and has no compunctions about destroying them. Julie’s assistant Charlie (Tyler Hilton) has gotten close to Lucy and thus has not installed the resistors which would limit her capacity to think for herself and adapt to new situations, and with Lucy being guided by an entity known only as TAALR (the voice of Dermot Mulroney), the humanichs begin planning their own agenda for future world takeover.

So, the series devolves into a war between human beings, the alien hybrids who originated with the child Molly gave birth to who quickly grow to adulthood and create their own children, and the mechanical humanichs who will insure their own survival even if it means wiping not only every alien off the planet but every human being as well. Sound familiar? There’s even a 2001: A Space Odyssey H.A.L. calling the shots and which the ending episodes of the season must focus on destroying (governmental bigshots, of course, like those played by Kate Burton as Defense Secretary Fiona Stanton and David Morrissey as General Tobias Shepherd never suspect for a moment that they aren’t in control of the machines; they must never have seen any Terminator movies). The most damning elements of the series, however, are the same problems which were present in season one: the dim-wittedness of almost every major character who are all allegedly very intelligent but can never see even one jump ahead and who can never use their imaginations to even consider let alone believe another character who explains potentially catastrophic events before things spin out of control and can’t be contained. With the loss of leading man Goran Visnjic in the season premiere, Jeffrey Dean Morgan playing police investigator J.D. Richter is brought in as muscle for the good guys as well as (late in the season) a love interest for the series star, but like so many of the characters here, his performance is hindered by spotty writing and misguided subplots (his pregnant daughter played by Lyndon Smith appears on and off to spew venom at her father as does his ex-wife played by Melina Kanakaredes). But like so many characters in the show, personalities seem to waffle as leaves in the wind, and one is never really sure where one stands with any character from one episode to the next.

Halle Berry fares no better this season with a wildly variable character which the writers seemingly try every permutation of to arrive at something interesting for the award-winning actress to play: emotionally distraught wife and mother, a warrior avenger, a hybrid alien herself, and inevitably, a humanich replica which her hybrid persona must fight in the series finale episode. As was the case in season one, the best performance is given by young Pierce Gagnon as the android Ethan struggling with reprogramming which can never quite wipe his memories of his life with Molly in season one. Not far behind is Tyler Hilton as the well-meaning Charlie and Grace Gummer as the confused and somewhat desperate-to-make-good Julie. But why have the writers made almost every other female character on the show such a threatening, cold-blooded harpy? Hilarie Burton’s Anna Schaefer who sneeringly hands out governmental assignments, Necar Zadegan’s Shana Valez who serves as General Shepherd’s snake-like assistant, Kate Burton’s unbending Defense Secretary Fiona Stanton. It’s almost like a squadron of Lady Macbeth clones present in every episode. Despite being a humanich, Kiersey Clemons manages to imbue within her Lucy some sparks of something approaching feelings, and while he bounces around like a ping pong ball all season by being either for and against the hybrids, David Morrissey does eventually earn some sympathy as the misguided general. Look for Louis Gossett, Jr. and Keith David to show up in important guest star roles late in the season.

Here are the thirteen episodes on four Blu-ray discs (which a couple of times were combined into a two-hour timeslot in the original network airing).

The program’s widescreen television aspect ratio of 1.78:1 is presented in 1080p resolution using the AVC codec. Overall, the quality is dazzling with superb sharpness featuring lots of detail in clothes, hair, facial features, and décor. Color is pleasingly saturated with believable skin tones throughout. Contrast has also been effectively dialed in through the thirteen episodes. Black levels aren’t always consistently deep, but at their best, they are quite impressive. Each episode has been divided into 7chapters except for the paired episodes which have 12 chapters.

The DTS-HD Master Audio 5.1 sound mix is especially impressive for a summer television series. There is outstanding split sound effects woven through the mix into the fronts and rears, and the background score gets a nice spread through the entire soundstage with excellent bass rumblings through music and effects. Dialogue has been well recorded and has been placed in the center channel.

Deleted Scenes (HD): seven deleted scenes are placed on the four discs with the episodes from which they were excised.

Extant: A Look at Season 2 (17:55, HD): a generally comprehensive look at the sweeping storylines of the second season involving the humans, the hybrids, and the humanichs. The changes from season one and the progression of the stories are expounded on by producers Liz Kruger, Craig Shapiro, and Mickey Fisher and by actors Halle Berry, Jeffrey Dean Morgan, Grace Gummer, and Pierce Gagnon.

A Tour of the Sets (6:01, HD): production designer Kenneth Hardy discusses the numerous sets needed for season two, and his work is described and praised by producer Liz Kruger and actors Jeffrey Dean Morgan and Grace Gummer.

The Carnival of the Mind (4:58, HD): production designer Kenneth Hardy discusses the building of a carnival inside a soundstage for “The Other Side” episode with additional soundbites by creator/producer Mickey Fisher and stars Halle Berry and Pierce Gagnon.

Chemistry: Molly and J.D. (6:10, HD): director Dan Lerner expounds on the on-set chemistry between Jeffrey Dean Morgan and Halle Berry with both stars likewise praising the other for his work on the show, echoed by producer Mickey Fisher.

Two Humanichs: Ethan and Lucy (7:02, HD): producers Liz Kruger and Mickey Fisher discuss the importance of the performances for the roles of Ethan and Lucy to work on the show, and the actors who play them, Pierce Gagnon and Kiersey Clemons, along with Halle Berry also comment on the parts.

The Season Finale (8:12, HD): Obviously shot before the cast and crew knew CBS was pulling the plug on the show, the program’s special effects and stunt coordinators as well as producers Craig Shapiro and Mickey Fisher and stars Halle Berry, Kiersey Clemons, and Tyler Hilton comment on the resolutions established in the finale episode and where they might lead.

Extant was a series with much potential which never really seemed to find its own unique identity instead trading on familiar sci-fi tropes seen in countless other films and television programs. The Blu-ray release for the second and last season will be most welcome for fans offering them the best possible picture and sound quality and some interesting bonus material for viewing.