With the Oscar and Emmy-winning duo of Steven Spielberg executive producing and Halle Berry starring, there was much pre-premiere buzz surrounding the futuristic science fiction CBS series Extant. Despite an intriguing premise, outstanding actors in some key roles, and terrific production design that produced a believable and identifiable near-future, the show never really took off in the way that CBS’ Under the Dome had in the summer of 2013. Though the series received a surprising renewal for another season at the end of the summer, the program has logic and character problems that should require some major retooling before the producers get to work on another series of episodes for 2015. 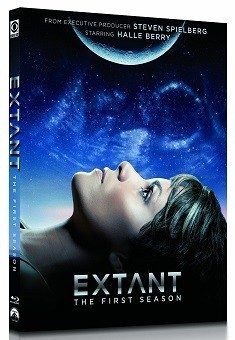 After spending thirteen months in isolation on a space station, astronaut Molly Woods (Halle Berry) returns to Earth to find from her doctor/best friend Sam Barton (Camryn Manheim) that she’s pregnant. She has no memory of intercourse, and a thirteen hour gap in the mission logs don’t offer any help, but as days pass, clues make it clear that Molly is carrying some kind of alien inside her. And her problems don’t end there. She and her robotic expert scientist husband John (Goran Visnjic) have taken in his prototype animatronic eight-year old named Ethan (Pierce Gagnon) to raise as their son, and things haven’t always been smooth sailing with the boy or her husband, an unsettling environment that John’s fellow workers Julie (Grace Gummer) and Charlie (Tyler Hilton) object to since they’ve come to care about Ethan almost as surrogate parents themselves. Two business entities seem to be behind some shady and ruthless manipulations of the primary characters in the story: the space agency ISEA currently being run by Alan Sparks (Michael O'Neill) and the Yasumoto Corporation run by billionaire Hideki Yasumoto (Hiroyuki Sanada), both agencies with their own agendas concerning the events happening with Molly’s pregnancy and Sam’s experiments with Ethan.Writer Mickey Fisher has created a future of distinct possibilities where lifelike automatons seem as real as humans, where communication can be a part of every window, mirror, or reflective surface, and where an extraterrestrial can have the same need to survive as anyone or anything living on Earth. Thus, he’s combined elements from some of Spielberg’s most renowned films: Close Encounters of the Third Kind, E.T., and A.I.: Artificial Intelligence, into an initially intriguing narrative package. But somewhere around episode four or five, things start to fly off the rails as we delve more deeply into the psyches of all of the show’s major characters and many mysteries begin to be uncovered. We find many of these people are not always who they appear to be, that they conceal dastardly motivations for their own selfish purposes, and that their manipulations become increasingly irritating as supposedly intelligent people (like our protagonists) make blunder after blunder and then perpetuate their mistakes ever further by operating always from a place of their emotional responses instead of using their rational thought processes to make crucial decisions. Additionally, motivations of major characters seem to veer wildly during the course of the season, not just because they have their minds changed for them by other characters but simply because they seem to flip-flop their objectives based on the impulses of the different writers for any given episode. There is an underground, subversive anti-robot movement that seems initially like an important subplot, and there is only one crucial maneuver one particular member of the group makes during the season that impacts the show’s season finale, but his subversive maneuvers seem to happen awfully conveniently without the kind of intense overseeing that one would have expected from the characters who have such a vested interest in the welfare of Ethan. It’s continual lapses in plotting and character building that take one right out of the show in almost all of the later episodes despite the unquestionable tension and sometimes gripping anxiety that has been carefully established as we get closer and closer to seeing this alien for ourselves in the final couple of shows after it’s been operating independently for most of the season.Despite her shelf of acting awards, Halle Berry brings only a moderate amount of involving drama to the role of Molly. She is unfortunately the most obvious victim of the inconsistent writing that often makes her character seem unfathomably dense and obtuse, and the production’s frequent use of flashbacks which take us back and forth to important moments in her earlier life provide her with more meaty dramatics than almost any of the present-day scenes where her motivations often appear ridiculous. Goran Visnjic also doesn’t quite live up to the brilliant scientist that John Woods allegedly is though we do get more frequent glimpses of his humanity as he struggles to control his robotic son who’s developing at a faster rate than even he could have imagined. Pierce Gagnon is the real deal as Ethan with enough character tics to be believable as a machine and enough humanity to suggest a struggling entity trying to adjust to a world filled with contradictions and charlatans who prey on his innocence. Grace Gummer does much with the role of Julie, obviously infatuated with her boss but knowing he’s devoted to his family and struggling to reconcile that Ethan will never be solely hers. Camryn Manheim has some good moments particularly early in the season as Molly’s best friend, and Brad Beyer is compelling as another astronaut who had his own close encounter with the alien “spores” and is motivated to eliminate them at any cost.Here are the thirteen episodes presented on four Blu-ray discs:1 – Re-Entry2 – Extinct3 – Wish You Were Here4 – Shelter5 – What on Earth Is Wrong?6 – Nightmares7/8 – More in Heaven and Earth/Incursion9/10 – Care and Feeding/A Pack of Cards11 – A New World12 – Before the Blood13 – Ascension

The program’s widescreen television aspect ratio of 1.78:1 is presented in 1080p resolution using the AVC codec. Overall, the visual quality is dazzling with superb sharpness featuring lots of detail in clothes, hair, facial features, and décor. Color is pleasingly saturated with believable skin tones throughout. Contrast has also been effectively dialed in through the thirteen episodes. Black levels aren’t always consistently deep, but at their best, they are quite impressive. Each episode has been divided into 6 chapters except for the paired episodes which have 12 chapters.

The DTS-HD Master Audio 5.1 sound mix is especially impressive for a summer television series. There is outstanding split sound effects woven through the mix into the fronts and rears, and the background score by Marcelo Zarvos gets a nice spread through the entire soundstage with excellent bass rumblings through music and effects. Dialogue has been well recorded and has been placed in the center channel.

Deleted Scenes (HD): nineteen scenes from eight of the episodes are attached in the main menu to the episodes where they were excised.The Story of Extant (15:04, HD): creator Mickey Fisher describes how he came to write the pilot through a contest in which he wanted to honor Steven Spielberg’s E.T. and A.I., Halle Berry raves about the script and the role it offered her to want to tackle a piece of series television, Spielberg himself praises Fisher’s efforts, and we pay a visit to the writers’ room to see them busy at work.CBS Launch Promos (6:34, SD): seven promotional ads are strung together in a montage.Extant: Filming Season One (20:48, HD): creator Mickey Fisher, star Halle Berry, and producers Greg Walker, Darryl Frank, and Justin Falvey all praise pilot director Allen Coulter for establishing their world so successfully. Actor Grace Gummer and stunt coordinator Jim Vickers also praise the cadre of directors who subsequently came in to helm episodes as well as star Halle Berry who headed the company.Extant: The Cast (16:33, HD): Sound bites from producers Greg Walker and Darryl Frank praise their cast who also have brief interviews praising one another: Halle Berry, Goran Visnjic, Pierce Gagnon, Michael O'Neill, Hiroyuki Sanada, and Camryn Manheim.The Mythology of Extant (6:18, HD): creator Mickey Fisher discusses the corporations found in this future civilization and the people who populate his world.The Offspring (7:26, HD): creator Mickey Fisher discusses the alien presence in the story and its desire to be extant rather than extinct, and special effects coordinator Stephan Fleet explains how certain effects were brought about on a TV budget.The Future World of Extant (17:29, HD): sound bites from key production personnel like producer Greg Walker, stars Halle Berry and Camryn Manheim, production designer Cabot McMullen, creator Mickey Fisher, and director of photography David Mullen among others talk about the look and feel of the series.The Visual Effects of Extant (9:14, HD): visual effects coordinator Stephen Fleet talks about specific effects in the later episodes of the show as they prep for work on the season finale.Gag Reel (6:18, HD)Promo Trailers (HD): Star Trek: The Next Generation – The Final Season, Twin Peaks: The Complete Series.

Extant has an interesting premise and some undeniable tension in its first thirteen episodes, but there are problems inherent in the storytelling that need to be addressed in the show’s second season. For fans of season one, you can’t really ask for better picture or sound than what is offered in this package.