CBS’ modern spin on the Sherlock Holmes canon Elementary had a wonderful second season of complicated conundrums. Not content to be a simple whodunit (though it is certainly a mystery series to its core), the puzzles constructed for Elementary are among the most complex currently being authored for television, and with the lead actors growing ever richer and deeper in their characterizations of two of literature’s most iconic personas, Elementary has become one of the real must-see productions on CBS’ heavily proceduralized line-up. 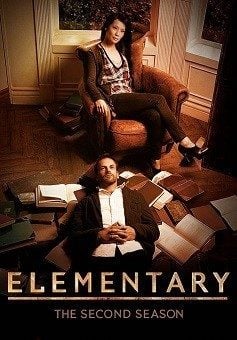 Amaray case with leaves inside a slipcase

With Joan Watson (Lucy Liu) now firmly ensconced as Sherlock Holmes’ (Jonny Lee Miller) able and adept partner in consulting detective work for the NYPD, the producers of the show changed things up for the season premiere by taking the pair to London in an attempt to salvage what’s left of the career of Holmes’ former Scotland Yard partner Gareth Lestrade (Sean Pertwee) who’s gone steadily downhill without the help of the brilliant Holmes to solve his casework. Not only does this trip introduce us to Lestrade, but we also get a glimpse at Holmes’ old digs at 221B Baker Street as well as have our first meeting with Holmes’ older brother Mycroft (Rhys Ifans). These introductions are important because during the course of the season separate story arcs are constructed around Lestrade (two episodes) and Mycroft (six episodes including the final four which constitute a long serialized story concerning espionage work with Britain’s MI-6) when each of them visits Holmes in New York City. This first case may not be in the same league with some of the season’s more intricate mysteries (Sherlock solves it fairly quickly, in fact, though gathering proof is tougher), but the personalities and relationships between Holmes and his two most prominent English acquaintances are delightfully confrontational and offer in their episodes a good mix of comedy and drama.Story arcs with these two aren’t the only ones which occupy a portion of season two. Detective Marcus Bell (Jon Michael Hill), the primary detective who assists Holmes and Watson on their cases, goes through a rigorous set of episodes where an injury to his right hand (inadvertently caused by Holmes’ aggressive pursuit of a suspect) jeopardizes his career as a homicide detective. While the officer goes through physical therapy to restore his hand functions, he must also work through anger issues with Holmes resulting in some heated confrontations between the two. His superior Captain Thomas Gregson (Aidan Quinn) has one spotlight episode this season with “An Unnatural Arrangement” when we learn he and his wife have separated, a nugget of information that comes about when she wards off an attack by someone who shows up at their home looking for her husband. A wonderfully convoluted mystery follows.Though the focus is on solving murders during the season, there are also episodes involving other crimes: kidnapping, blackmail, theft, and missing persons. The season allows brief returns for two memorable characters from the first season: Moriarty (Natalie Dormer) who’s involved in a surprising kidnapping plot and Sherlock’s actor friend Alistair Moore (Roger Rees) whose death affects the detective far more than he would have ever imagined. In fact, one of the great developments of the second season is in the display of deepening of emotions for Holmes. Not just a fact machine and human computer of old, Holmes must confront growing attachments to people and feelings of concern for quite a few people in his orbit (not just Watson, Gregson, and Bell but his AA sponsor Alfredo (Ato Essandoh) and Randy (Stephen Tyrone Williams), an addict whom he begins to sponsor). Still, amid all of these bubbling emotions, Holmes and Watson must still cope with some unusual cases including dealing with a super creepy serial killer who gets the upper hand on them (Troy Garity), a life-threatening anthrax threat and a poisoning by nitro glycerin, and a cabal of cyber highwaymen who call themselves Everyone.It goes without saying that Jonny Lee Miller is doing some of the best, most nuanced work of his career as Sherlock. The advancement of his interpretation this season as Sherlock grows in his empathetic reactions has been a remarkable transformation, one that pays big dividends as the season progresses and Sherlock feels Watson slipping away from his grasp leading to potential major changes for season three. Lucy Liu’s Watson has also come a long way from the sober companion she played in season one. Now using her brilliant doctor’s intellect with a focus on observation and deduction and mastering some of the tricks of Sherlock’s trade (lock picking, pickpocketing, combat training), Watson is a force to be reckoned with, and she undertakes a couple of simple cases on her own this season quite handily. Aidan Quinn and Jon Michael Hill continue to play the straight-laced cops who know Holmes’ skills but still question on occasion his conclusions. And the series continues its connections to the Arthur Conan Doyle stories this season, not only with the introductions of Lestrade and Mycroft but also by having the occasional appearance by Ms. Hudson (Candis Cayne) and by dropping phrases like “the Norwood Builder,” “Silver Blaze,” and “The Man with the Twisted Lip,” all straight out of the tales.Here are the twenty-four episodes contained on six discs in this second season DVD set:1 – Step Nine2 – Solve for X3 – We Are Everyone4 – Poison Pen5 – Ancient History6 – An Unnatural Arrangement7 – The Marchioness8 – Blood Is Thicker9 – On the Line10 – Tremors11 – Internal Audit12 – The Diabolical Kind13 – All in the Family14 – Dead Clade Walking15 – Corpse De Ballet16 – The One Percent Solution17 – Ears to You18 – The Hound of the Cancer Cells19 – The Many Mouths of Aaron Colville20 – No Lack of Void21 – The Man with the Twisted Lip22 – Paint It Black23 – Art in the Blood24 – The Grand Experiment

The transfers are presented in their widescreen television aspect ratio of 1.78:1 and are anamorphically enhanced for widescreen televisions. At 480p quality, these are mostly outstanding transfers. Sharpness is exceedingly crisp and inviting with as much detail as can be squeezed from standard definition video. Color is nicely under control throughout with appealing and realistic skin tones. Black levels are rich and shadow detail is nicely delivered. There are occasional brushes with moiré patterns in blinds and some minor aliasing with close line structures. Each episode has been divided into 6 chapters.

The disc offers both Dolby Digital 5.1 and 2.0 stereo surround sound mixes. Both are effective. For the purposes of this review, the Dolby Digital 5.1 mix was utilized for all but one episode. The score by Sean Callery is the primary inhabitant of the surround channels, and it’s effectively and wittily placed to maximize the series’ mixture of quirky and dramatic moments and sounds rather expansive. Being a dialogue-heavy show, the recording of same is very professionally done with the dialogue residing in the center channel. Sound effects occasionally do pan through the soundstage or occupy split channels, but with the series being shot in New York City, more of the city’s ambiance might have been reflected in the audio mix.

Audio Commentary: Actress Lucy Liu comments on the episode she directed this season “Paint It Black” with the director of photography Ron Fortunato. She’s much more interested in commenting about camera set-ups and lighting than offering many tidbits about working with her co-stars (whom she praises, of course), but fans of the show will still find it interesting.Deleted Scenes: only two deleted scenes are included, each linked to the episode from which it was taken (# 7 and #21).Holmes Goes Home (7:58): creator/producer Rob Doherty, producer Craig Sweeny, and stars Jonny Lee Miller and Lucy Liu comment on the luxury of getting to begin the season shooting in London.Under the Magnifying Glass (8:04): Rob Doherty and crew members Carrie Stewart (set decorator), Jerry Levine and John Polson (directors), Andrew Bernard (production designer), and others discuss the intricacies of dressing the crime scenes, staging and shooting the action, and choosing locations.Skill Sets (7:09): producers Rob Doherty and Craig Sweeny discuss the various skills Holmes must master to do his job including single stick combat, lock picking, picking pockets, bee keeping, and the medical content of the show which Watson and others must display.Second Chapter: Inside Elementary (19:45): Rob Doherty, Craig Sweeney, Jonny Lee Miller, Lucy Liu, Aidan Quinn, and Jon Michael Hill comment on the narrative journeys each of the characters takes in season two.Meet Mycroft (8:44): Jonny Lee Miller, Rhys Ifans, and Rob Doherty talk about the sibling relationship established for Sherlock and Mycroft in season two.The Life of Clyde (4:09): behind the scenes interview spoof with Sherlock’s pet turtle Clyde.Gag Reel (3:15)

Elementary had a exceptionally entertaining second season (though the extended four-episode story arc which ended the season saw a somewhat disturbing decrease in viewers who are obviously accustomed to the show’s more regular closed episode storytelling). Changes seem afoot with the show’s characters at least for the first few episodes of season three, changes which may make for a somewhat different show next season. Regardless, season two is highly recommended!

That's a reasonable price on Amazon for the DVD, but I'm still disappointed there's no Blu-ray.

With season one last year, the price was much higher (around $40 I think), so I wound going the route of iTunes HD download for (the temporary price of) $24.99.

I eventually picked up a used copy of the season one DVD, but I'll probably spring for the DVD of season two given the pricing.

Cameron Yee said:
That's a reasonable price on Amazon for the DVD, but I'm still disappointed there's no Blu-ray.

With season one last year, the price was much higher (around $40 I think), so I wound going the route of iTunes HD download for (the temporary price of) $24.99.

I eventually picked up a used copy of the season one DVD, but I'll probably spring for the DVD of season two given the pricing.
Click to expand...

I might go that route too with Vudu or iTunes. It's cheaper than the DVD and is in 1080p.

I'm seeing $5 more for the HD download on iTunes and Vudu, which is probably worth the improved PQ but lacks most of the extras found on the DVD. Pick your poison.