“The best new TV Show you should be watching” 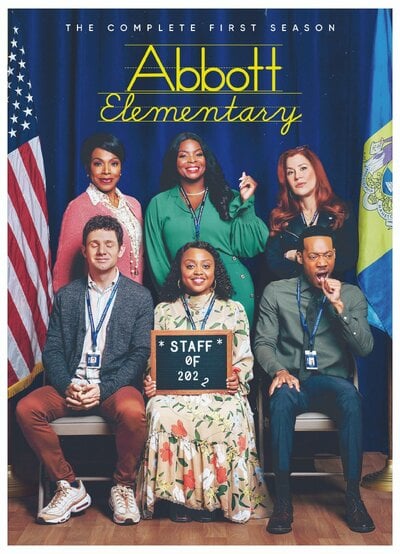 ​
BURBANK, CA (August 18, 2022) – As ABC’s first new television comedy debut to quadruple its ratings after delayed cross-platform viewing, Abbott Elementary has quickly become the network’s highest rated comedy and TV’s most-tweeted about comedy of the year and has a 98% positive rating on Rotten Tomatoes. Now get ready for the critically acclaimed hit as Warner Bros. Home Entertainment releases Abbott Elementary: The Complete First Season on DVD October 18, 2022. Featuring all thirteen hilarious episodes, Abbott Elementary: The Complete First Season is priced to own at $24.98 SRP and is also available to own on Digital via purchase from all major digital retailers.

Abbott Elementary is a workplace comedy about a group of dedicated, passionate teachers — and a slightly tone-deaf principal — who are brought together in a Philadelphia public school where, despite the odds stacked against them, they are determined to help their students succeed in life. Though these incredible public servants may be outnumbered and underfunded, they love what they do — even if they don’t love the school district’s less-than-stellar attitude toward educating children.

Quinta Brunson created and stars as Janine Teagues in Abbott Elementary, and she serves as executive producer of the series alongside Justin Halpern and Patrick Schumacker of Delicious Non-Sequitur Productions, and Randall Einhorn. In addition to Brunson, the cast includes Tyler James Williams as Gregory Eddie, Janelle James as Ava Coleman, Lisa Ann Walter as Melissa Schemmenti, Chris Perfetti as Jacob Hill, William Stanford Davis as Mr. Johnson, and Sheryl Lee Ralph as Barbara Howard. The series is produced by Delicious Non-Sequitur Productions in association with Warner Bros. Television and 20th Television, a part of Disney Television Studios.


DIGITAL​
Abbott Elementary: The Complete First Season is currently available to own on Digital. Digital purchase allows consumers to instantly stream and download to watch anywhere and anytime on their favorite devices. Digital movies and TV shows are available from various digital retailers including Prime Video, Apple TV, Google Play, Vudu and others.

Subtitles: ESDHThank you for supporting HTF when you preorder using the link below. If you are using an adblocker you will not see link. As an Amazon Associate HTF earns from qualifying purchases
​

This show is absolutely fantastic. I highly recommend it to anybody who hasn't seen it yet. The first season is streaming on both Hulu and soon on HBO Max.

I might pick this up at some point for my collection because I believe in physical media. But a DVD-only barebones release isn't going to be at the top of my shopping list.

I didn't watch the first season on ABC (my mistake, I had to endure endless commercials on Hulu when I streamed it. I won't make the same mistake THIS season). As a former teacher for three decades, I have to say the show is both funny, identifiable, and infuriating: I could easily identify with the many problems encountered by these teachers, still very present in education even though I've been retired for over twenty years. It's galling knowing that teachers are still struggling with many of the same problems I struggled with even in this far more technological age.

I gave up on network television situation comedies quite awhile ago, and then this premiered. I heard many good things about it so I hesitantly decided to give it a shot. I was only not disappointed I was elated.

This show is top drawer ALL THE WAY. Top notch casting, writing, acting and directing. This show is golden.

I have had a crush on Sheryl Lee Ralph ever since I saw her in the original Broadway cast of Dreamgirls in 1982. I was 15 years old and it was my first Broadway show. She deserves every accolade and award thrown her way. Long overdue and extremely well deserved.
You must log in or register to reply here.