Star Trek: The Next Generation’s Sixth Season saw the return of James Doohan’s Scotty, a return of The Borg, Riker going insane, Picard falling in love, Troi falling under an unpleasant spell, Worf have a High Noon moment, and Data lose his head (literally and figuratively). It is another strong season that comes to us in splendid high definition courtesy the passion and investment of CBS. With just the seventh season left to be released in HD, Trek fans (Trekkers or Trekkies, take your pick) will be eager to see companion shows make their debut once the extensive conversion work can be given the green light by CBS. Star Trek: Deep Space Nine and Star Trek: Voyager may not have enjoyed the heights of The Next Generation, they are no less deserving of the love shown the most popular of the Trek series. For now, however, fans can rejoice in the glorious arrival of Star Trek: The Next Generation – The Complete Sixth Season. 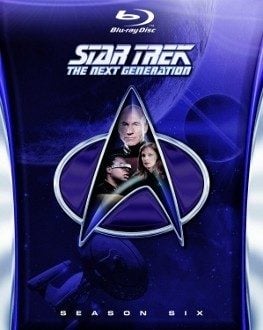 “There are many parts of my youth that I'm not proud of. There were... loose threads - untidy parts of me that I would like to remove. But when I... pulled on one of those threads - it unraveled the tapestry of my life.”

Star Trek: The Next Generation is the most successful of the now five Star Trek series, and for good reason. It was serious minded, exciting, and bolstered by wonderful visual effects for a Television show (thanks to ILM’s terrific stock effects and other talented folk) and an earnest dedication to the evolved sensibilities of our possible future created by Star Trek creator, Gene Roddenberry. The cast ranged from superb actors to moderately skilled, but each added a flavor and distinctness that are every bit an integral element in the fabric of the show. Patrick Stewart stars as the English accented, French born Captain Jean-Luc Picard, Jonathan Frakes as the handsome first officer, William T Riker, Brent Spiner as a unique and beloved android Commander Data, LeVar Burton, with his special visor as a mechanically gifted Chief Engineer Geordi La Forge, Marina Sirtis as a half-betazoid, half human ship counselor Deanna Troi, Michael Dorn as the interesting and impressive Chief of Security Worf (the lone Klingon aboard), Beverly Crusher portrayed by Gates McFadden, and missing in action for the sixth season (save a scene in the tag for the episode “Rascals” is Michelle Forbes as Ensign Ro Laren.The crew, captained by Jean-Luc Picard, explores space in the Enterprise D, a Galaxy Class starship, housing over 1000 crew and their families. They encounter evolved beings, mysterious anomalies, aggressive and amenable species and other assorted magnificent wonders out in the great unknown. The stories from the seven seasons for which this show ran feature impressive, intelligent and exciting tales that deliver allegorical thought-provokers and good old fashion science fiction fun. It is a show that has grown and prospered from the success of what the original series (in syndication and in feature films) provided. The Next Generation was different from the days of Kirk, Spock and McCoy in tone, technology and tenor – but fundamentally born of the same spirit of exploration, tolerance, social stories and intellect.

As a reminder, transferring this series to high-definition is a mammoth undertaking. The show’s visual effects were shot on film requiring every visual effects element to be re-compositioned (rather than suffer an upconversion from videotape). This requires re-cutting over 25,000 film reels, meticulously rebuilding the episodes and preserving the original episodes in lush detail transferred to high-definition detail.CBS-Digital again handles the conversion efforts and the results are the best this show has looked – ever.Details throughout the season are exceptional. The quality of the work delivered by the Make-Up Department (under the supervision of Michael Westmore) shines on a number of occasions, particularly a well-hidden James Cromwell (Star Trek: First Contact) as a sly Eurydian in exceptionally effective and detailed make-up. Patrick Stewarts stressed and drained appearance in “Chain of Command” is subtly effective, and the harsh lighting revealing of great detail. Close-ups of objects, notably a tricorder in “Timescapes”, demonstrate just how detailed the prop work had been on the show. Make-up on the actors faces can be a little uneven from time to time, again, seen here as a factor of higher resolution than the series expected to be seen by the public, but nothing distracting.After reviewing six seasons of The Next Generation, not an episode goes by where the superb work by CBS (and others) is not a gift for the eyes and ears. Once again the visual effects work is subtly recreated, planet surfaces are rendered with greater detail and nuance than ever before, and the work to ready the series for high definition renders the show almost timeless. A wonderful accomplishment.

Season six again continues the trend of excellent audio with a strong 7.1 DTS-HD track available for each episode.I’ve shared this in my reviews for previous seasons, but again I continue to be impressed with the audio quality with these sets as the hum of the bridge, engineering, and other locations on the Enterprise fill the low end of the audio spectrum. There is strength and clarity in the audio and though the separation of audio in the surrounds and across the front channels is not wildly dynamic, it is well-balanced, and delivers in all the ways one expects, and hopes, for this show.Also included is a DTS-HD 2.0 track that more closely resembles the stereo presentation of its original airing.

Although the special features offered on this Sixth Season set are not as comprehensive or alluring as those offered on previous seasons, what is contained – partnered with the full set of special features available on the former DVD release – still has enough to be enjoyed be casual and ardent fans alike.A good deal of time is taken up in the newly created three part documentary Beyond the Five Year Mission – The Evolution of Star Trek: The Next Generation on the development of Deep Space Nine. Longtime fans of the show will likely be familiar with some of the information offered, especially those who read the excellent The Making of Star Trek: Deep Space Nine by Judith & Garfield Reeves-Stevens, but being covered here is still welcome. The three part special feature largely runs the gamut of topics, with some trivial and some intriguing. What is lacking is the serious or once-in-a-lifetime gathering of participants to dissect and celebrate this season (or the show). Perhaps as the Blu-ray release wraps up with the final year we will see another welcome retrospective.What has been created new is interesting and the Gag reels are always entertaining. Those of us who watched many of these gag reel moments in poor quality on YouTube can delight in the HD presentation of them now.Disc One:Disc Two:Disc Three:Disc Four:Disc Five:Disc Six:

Though Brent Spiner’s Data is given a number of opportunities to surprise and delight in the sixth year, it is Patrick Stewart who steals the season. In addition to his phenomenal performance in “Chain of Command” – a two-part episode that roots the talented English thespian firmly in his stage roots – Stewart persists in adding gravitas consistently throughout his. Consider his performance in “Man of the People”, a relatively dull episode, during a scene where he discusses the moral implications of the “many” outweighing the needs of one (to paraphrase), he anchors that moment remarkably. Though Marina Sirtis delivers a fine performance in the episode as an emotionally unstable, affected soul, somehow it is Stewart who, with great subtlety, adds a weight and seriousness to his few scenes far better than the episode deserved. And in the modest (and underrated) episode “Lessons,” Stewart produces another strong performance as a lonely, fallible captain struck by a forthright and musically gifted new officer under his command. He is given a fine actor to perform with in Wendy Hughes as Commander Neila Daren, and he is able to add even more dimension and detail to an already adored character.Season Six saw a slip in quality and effectiveness early in the 26 episode collection, but the net result of the year is far stronger than expected revisiting them after so many years. Though the soaring highs of the third and fourth season aren’t touched here, what we do have is a consistent and confidently produced series that had been affected by the work to launch a companion Star Trek series. The deeper effects of that division of attention by show runners would be most harshly felt in season seven as it became coupled with a dearth of creative sparks (they were running out of ideas), but this sixth year remains very good, and with the quality of the episodes and the stunning presentation, this set comes highly recommended.

There is also an audio commentary on Disc 1 for Relics with Ronald D. Moore and Mike and Denise Okuda.

I always use your Star Trek: TNG reviews as an introduction to a series
that I am about to watch.

This time I was able to get a head start, and am about halfway through.

Thoroughly enjoying this season -- even some episodes that you and other
members cite as being clunkers.

This is the best the series has ever looked -- much better detailed transfer
than previous seasons and the 7.1 is more distinguishable than it ever has been.

Thank you for taking the time to do such a thorough review. I always look
forward to reading your thoughts on each season.
Reactions: Neil Middlemiss 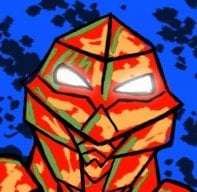 ...Sorry. The Constellation class was the Stargazer.

...Sorry. The Constellation class was the Stargazer.
Click to expand...

But of course it is. The perils of reading about Picard's early days while writing this review. I'll update!

Just finished watching two very good episodes:Suspicions and and Rightful Heir. The latter was the best of the two, particularly
for its theme and Worf's performance.

This season really has some gems in it.

Noticed Miles O'Brien isn't in many of these episodes. He kind of comes and
goes and it has me wondering if he still has appearances left in this season or next.

What Wayne said, Ron. DS9 premiered right between "Chain of Command II" and "Ship in a Bottle" airing. O'Brien (and Keiko's) last TNG appearance would be "Rascals."

Although O'Brien does appear in the series finale "All Good Things".

Wayne_j said:
Although O'Brien does appear in the series finale "All Good Things".
Click to expand...

Spoiler? I don't know if it still qualifies after all these years, tho.

Great review Neil. I just picked this up recently, and look forward to your review of season 7.Hmm. I just watched two episodes "Man Of The People" and "Relics" and overall the video is very good. However, a few scenes over both eps. seem very soft. Not quite the waxy heavily DNR type that can ruin a transfer, but not very natural looking either.I never bought into the idea that the even numbered TNG Blu-Ray transfers are lesser quality than the odd. But season 6 while mostly impressive has some issues(with me anyway)Maybe it is just my tv.

Yep sorry. It was my tv.My nephew got into my advanced settings mode on the remote while I was away, and went nuts with all the artificial gobbly gook settings like dynamic contrast.All fixed now. Looks fantastic.
Reactions: Jason_V

Bryan^H said:
Great review Neil. I just picked this up recently, and look forward to your review of season 7.
Click to expand...

Thanks. My review copy was a little late in arriving but I have been working my way through the season and writing up my review the past couple of days. I hope to have it up as soon as possible, but I still have quite a bit of the season left to catch up on. So far so good though
Reactions: Bryan^H
You must log in or register to reply here.
Share:
Facebook Twitter Reddit Pinterest Tumblr WhatsApp Email Link